Victor LaValle is the author of the short story collection Slapboxing with Jesus, three novels, The Ecstatic, Big Machine, and The Devil in Silver, and two novellas, Lucretia and the Kroons and The Ballad of Black Tom. He has been the recipient of numerous awards including a Whiting Writers’ Award, a United States Artists Ford Fellowship, a Guggenheim Fellowship, a Shirley Jackson Award, an American Book Award, and the key to Southeast Queens. He was raised in Queens, New York. He now lives in Washington Heights with his wife and kids. He teaches at Columbia University.

How do you define horror and how much of the definition of horror do you think is rooted in a particular culture? That is, how well does what is horrific for one society—with their history, morality, culture—translate to another?

I’m pretty interested in this question. I grew up on horror; it’s the reason I fell in love with reading, and yet there’s such a wealth of cultural assumptions deeply embedded in the genre—at least the US, largely white version I grew up with—that I’m still regularly surprised by what’s taken for granted as the positive, or the good, in a work of horror. Maybe this is just my way of saying that I often sympathized with the monsters a hell of a lot more than I did with the people I was meant to root for. This seems glib but I think there’s a more serious idea hiding in there.

What makes a monster? Who has to be victimized for someone or something to be considered evil? I’d like to think there are some bedrock goals or beliefs that are universal, but even a cursory glance at world history—at the clash of various cultures—suggests otherwise. So maybe the only thing to rely on is a grounded perspective in either a narrator or a protagonist, one that communicates the values at play in a particular story. If those are clear then a reader might, I hope, follow any culture anywhere.

I’m particularly fascinated by how you come at genre as a person of color. Do you consider yourself a horror writer, a weird fiction writer, a literary writer, or do these labels not mean much when you sit down to write a story? What is it about Weird Fiction that keeps you coming back?

I consider myself a literary writer who’s trying hard to become a horror writer. I fell in love with horror when I was young, and fell hard for literary fiction in my twenties. Now, I often feel like I’m trying to thread the needle between the two. I have noticed that my work never really begins as what I’d call “horror.” By that, I mean that I spend time (sometimes too much damn time) creating a sense of normalcy, whatever that means for a story, before the horrific aspects start to accrue. I always want to understand who the people are, how they live, before I toss whole wheelbarrows worth of shit at them.

In the acknowledgments of Big Machine, you wrote, “Being a weird black kid can turn you a little crazy unless you have some role models.” Who were your major influences, and how have they changed as you’ve grown as a writer?

When I wrote that line I was thinking, in particular, of the black eccentrics I’d come across in life, the ones who suggested that I was not some anomaly. Horror, as far as my reading went, was pretty much a wasteland for black writers. I’m talking the early eighties. There were heaps of white writers I loved, but the black folks were in short supply. And I wasn’t a science fiction or fantasy kid, so I didn’t come across Octavia Butler or Samuel Delany, for instance, until I was in my twenties. So this meant I left literature behind in my quest to find a few guideposts.

A list of the weird black folks who meant the world to me when I was younger would include: Phil Lynott from Thin Lizzy, Fishbone (whole band), and Cochise from The Warriors (he was a gang leader and tough as hell, but if you remember his outfit alone, that made him qualify as someone I loved). Hell, I even loved Black Manta from the old Super Friends cartoon. As time passed, I figured out that I needed to find the weirdos who wrote books, too. I knew I wanted to be a writer, but still needed that kind of inspiration. This is how I came to discover writers like Gayl Jones and Ishmael Reed, Michelle Wallace and Ben Okri, and others musicians like Sun Ra and Nina Simone. They’ve meant the world to me.

I’ve read about how your Ugandan mother and grandmother were devout Episcopalians and how the legacy created by being raised Christian impacted the lens through which you see the supernatural and good/evil. How does faith intersect with horror in general, and for you and your work specifically?

If we’re talking about one particular strain of horror, or literature, or culture—and that strain is Western culture—then it’s pretty difficult to ignore/avoid the lasting effects of the Judeo-Christian faiths. One of the things I find most intriguing about Christianity in particular—one of the things I’m most grateful for—is just how flexible the faith turned out to be. I don’t mean accommodating, certainly it’s got as long a history as most other religions (or political systems) of ramrodding people into compliance. But I’m endlessly fascinated at how many other faiths or cultures find room to tuck snugly into Christianity, rather than simply being erased. I’m thinking of the obvious stuff like Christmas trees and Easter eggs, both well understood as remnants of earlier Pagan faiths, but also the ways that religions like Santeria and Candomblé and Voodoo (and many more) could hide in plain sight within the Christian faith. While of course there’s a seemingly simple idea of good and evil within Christianity, I’ve been endlessly grateful to know, and believe, that the faith itself is actually much more complicated than pop culture depictions would ever allow. I think that’s had a profound effect on my faith and my writing.

When you were growing up in Queens, you loved reading the horror stories of H.P. Lovecraft. When you were older, you recognized his level of racism. The Ballad of Black Tom seems like a conversation with Lovecraft by way of #blacklivesmatter. Its dedication reads, “For H.P. Lovecraft, with all my conflicted feelings.” What drew you to Lovecraft in the first place? How did you reconcile with this “giant of the genre,” despite his racism?

I grew up on Lovecraft, reading him long before I had any real critical faculties, and as a result I came to love him long before I understood what was repellent about him. In this way, he’s a lot like a family member. I can’t be the only person in the world who loves a family member but also understands that he or she believes in—and gives voice to—a hell of a lot of ugly personal and political opinions. And yet, you don’t—or I don’t—stop loving that person. How could I? He or she says terrible things about some group of people (“Left handed people can’t be trusted!”) and also helps me learn how to ride a bike. What do I do with such a person? It’s going to be a complicated kind of love that results.

That’s really what lay behind the writing of The Ballad of Black Tom. As an adult, I realize the point isn’t to separate Lovecraft’s writing from his prejudices, because his work is infused with, and informed by, those exact prejudices. In fact, his work wouldn’t be as interesting if he wasn’t such a profoundly prejudiced person. One of things he did incredibly well was to tap into a specific kind of fear—white, male, intellectual, upper class (if not wealthy any longer)—and turn that into a dreamy phantasmagoria that generations of readers and writers would eventually have to wander through. I like wrestling with that kind of thing rather than ignoring it.

Of course, I understand those people who never grew up reading Lovecraft and don’t feel a particular need to start now. I’m not even sure Lovecraft digs his hooks into you as a reader if you come to him past a certain age. Most of the people I know who love him (even if they’re critical of him) first encountered him at a younger age. Again, falling in love before the critical faculties have developed. For instance, I rarely find someone else’s crotchety, prejudiced relative charming at all.

Do you feel a pressure or obligation, as a person of color, to your community when it comes to crafting stories? For example, a responsibility to represent well? Is this something you lean into or shy away from? In fact, should an artist have any social burden, when it comes to the work they produce?

This is a valuable question to argue about. Some readers have felt that my depiction of Tommy Tester in The Ballad of Black Tom ends up skewing too negative. By the end, Tommy has made some horrific choices and has, in many ways, become the monstrous black man the racist white characters assume him to be. So there’s some question about whether or not I’m simply playing into those old stereotypes, or old narratives of black pathology. Just because I’m a black writer doesn’t mean I’m absolved of the same failing.

But I’d argue that my job is simply to create characters whose choices are understandable. Not relatable. Not likable. And certainly not a credit to their race. The danger in some of Lovecraft’s stories (not to mention so many other writers in every genre) is that the non-white, or female, characters commit acts of horror and depravity for reasons that are impossible to understand. They act in ways that are truly evil and, thus, become inhuman. But you don’t solve that problem by writing a bunch of damn saints. There are few things as dull as a “righteous” or “good” character. Sure, it may feel good to show the characters of color are purely good and on the side of justice (or something), but how is that any more honest than writing characters of color of who are comically evil? What I feel is missing most in depictions of any marginalized group is complexity. By the end of The Ballad of Black Tom, I knew things were going to go real bad for Tommy. I didn’t see how they could go any other way. The point, instead, was to see if I could make a reader understand why a character like Tommy might lose his shit. If I could show him willingly choose destruction and death, but have readers come away feeling invested, feeling like they still understood him, then I would have pulled off one hell of a coup. It’s easy to root for people who do good all the time. I’ve never met a person like that yet. 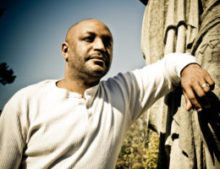 Maurice Broaddus is the author of the Knights of Breton Court urban fantasy trilogy: King Maker, King’s Justice, and King’s War (Angry Robot Books). His fiction has been published in numerous magazines and anthologies, including Asimov’s Science Fiction, Lightspeed Magazine, Cemetery Dance, Apex Magazine, and Weird Tales Magazine. Some of his stories are being collected in the upcoming Voices of the Martyrs (Rosarium Publishing). He co-edited Streets of Shadows (Alliteration Ink) and the Dark Faith anthology series (Apex Books). You can keep up with him at his web site, www.MauriceBroaddus.com.