The H Word: The Weird at the World’s End

I’ve been thinking a lot about what direction my own fiction should take in the current political climate, and whether I have a moral responsibility to address current events in my work. The easy response is to say horror is especially suited to these times—think of the horror boom which mirrored American hardcore punk in the Reagan ’80s. Or that we need more apocalyptic fiction—make it epic like Stephen King’s The Stand—and more zombies. After all, one could argue that we’re sitting closer to the end of the world than we have since the Cold War ended, with three imminent terminal scenarios—nuclear war, global warming and the Singularity.

Some would argue over horror’s parameters, but a consistent underpinning has been the confrontation with evil tropes that can, however, be destroyed if the hero (or anti-hero, as is more common nowadays) follows certain rules. The zombie can be halted with a headshot, the werewolf with silver bullets, the vampire with a stake or sunlight. But how does one fight a government where all checks and balanced are skewed/screwed to the benefit of political and corporate leaders who have shed any skin of caring about people? If ever a time was suited for the Weird, for cosmic horror with its creeping dread and central theme of humanity’s insignificance, now would seem to be it.

One of the more frequent reactions to an election that repeatedly distorted not only social norms, but consensus reality itself, was to evoke the familiar bumper sticker slogan “Cthulhu for President,” with its tagline “why choose the lesser evil?” Given the extent to which Lovecraft’s personal fear of the Outsider permeates his work—the Weird, in this case could became another toxic response, supporting rather than opposing racism and xenophobia. erasing awareness of the very real threats directed at marginalized communities à la “#alllivesdontmatter.”

However, I wonder if the Weird might be uniquely positioned to subvert the fear of the privileged rather than give it substance. The Weird today is a wide playground, vastly different than in the days of Lovecraft and his predominantly white male counterparts. In the twenty-first century, it has come into its own in dynamic new ways in the hands of a multitude of writers representing the full spectrum of gender, orientation, race and culture, and whose influences span broadly from genre to literary to global. Consider the diverse range of authors represented in the first three volumes of Year’s Best Weird Fiction from Undertow Publications. Most of all, Weird authors are casting women, people of color, LBGT as protagonists, not as threats or ancillaries.

Could the Weird, by teaching us how to live with a dysfunctional reality, shake us out of complacency and into action? Could the Weird provide lessons on how to live under the shadow of incessant dread? For over a decade, scientists, philosophers, and poets have told us we stand in the Anthropocene, a time when environmental damage has progressed so far that the chain-reaction to the end of the human race and the destruction of the planetary biosphere has passed the point of no return. In sum, we stand on the precipice of how to live after the end of the world. Jeff VanderMeer’s Southern Reach trilogy drew on such sources to frame this telos directly within the Weird.

If “horror is an emotion,” as Douglas E. Winter has suggested, could the Weird pose its own methods for addressing the un-addressable, the exploration of an uncaring universe where the task of creating a more compassionate world is left solely to individuals? Could it be a call to organize? Maybe that’s too ambitious, but it’s still food for thought, or bonne à penser, as Levi-Strauss phrased it.

Historically, the Weird presents fewer political dystopias than science fiction, horror, adventure pulp fiction, or comics, where the superheroes have been in constant fisticuffs with Nazis. In SF, there’s Orwell’s 1984, Frank Herbert’s Dune, with its bulbous, despotic Baron Harkonnen, Philip K. Dick’s Man in the High Castle, where the Nazis actually won WW2, Margaret Atwood’s The Handmaid’s Tale, and Octavia Butler’s Parable of the Talents, eerily predictive with a fanatical candidate who promises to “make America great again.”

Nevertheless, I offer as evidence of resistance two Weird tales from the last time the United States walked so closely in the shadow of fascism:

The first, Fritz Leiber’s “Smoke Ghost,” appeared in the October 1941 issue of Unknown and also serves as an early example of the urban Weird, a mode where he would prove a master. The tale centers on an apparition explicitly born from the industrial grit of cities. The setting isn’t established, but is likely Chicago, where Leiber lived before moving to Los Angeles, and in this passage, the protagonist, Catesby Wran, is looking out from the window of an elevated train at a faded advertisement for “some ancient patent medicine”:

Superficially it was like ten thousand other drab city roofs. But he always saw it around dusk, either in the normal smoky half-light, or tinged with red by the flat rays of a dirty sunset, or covered by ghostly windblown white sheets of rain-splash, or patched with blackish snow; and it seemed unusually bleak and suggestive, almost beautifully ugly, though in no sense picturesque; dreary but meaningful. Unconsciously it came to symbolize for Catesby Wran certain disagreeable aspects of the frustrated, frightened century in which he lived, the jangled century of hate and heavy industry and Fascist wars.

“Smoke Ghost” is not about Fascist wars and their explicit consequences, but this passage shows how an author can subtly embed the far-reaching tendrils of things occurring on a cosmic level to accent the overbearing insignificance of the individual.

A more overt example is Margaret St. Clair’s “Horror Howce,” first published in the July 1956 issue of Galaxy. It’s perhaps particularly well-suited to the era of a sales/con man-turned-president in that it involves commerce, a recurrent theme in St. Clair’s work. The main character, Freeman, is an entrepreneur hocking funhouse horror attractions who possesses the “handicap” of a “political past,” suggestive of a brush with Senator Joe McCarthy’s blacklist. Furthermore, in a business environment without regulations, safety standards are lax to nonexistent, and the point is to sell at any cost. Freeman’s last hope seemingly is investor Dickson-Hawes, eager for the next big thrill he can sell to audiences. When nothing fully satisfies him, Freeman offers to show him one more: “I’ve been working on something. There’s action and customer participation in it, all right, but I don’t know. It’s full of bugs. I just haven’t had time to fully work it out yet.”

The rest of the story is a literal madcap test-drive, where the horror accelerates into a high speed chase involving monsters that may not be just a special effect. Like St. Clair’s work itself, the action is clever in unexpected ways.

I don’t yet know how I personally will address our current reality through the lens of the Weird, nor do I know how other authors will respond, but I am confident they will do so in both subtle and unexpected clever ways, and that they will surprise and teach us. I know I’ll be writing something I wouldn’t have written in any prior year. Because writing is what I do. It’s the only reality where I can still define the rules. 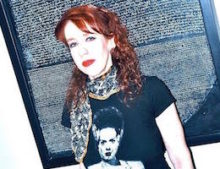 Anya Martin was weaned on Friday Night Frights and, from an early age, has rooted for the monster. Her next published work, the one–act play Passage to the Dreamtime, about a Nazi officer’s prison confrontation with both his American lover and past deeds, will be published as a limited edition chapbook from Dunhams Manor Press this spring. Her fiction also has appeared in such anthologies and magazines as Eternal Frankenstein, Cthulhu Fhtagn!, Giallo Fantastique, Cassilda’s Song, Xnoybis #2, Resonator: New Lovecraftian Tales From Beyond, Borderlands 6, Mantid Magazine, and Womanthology: Heroic. Find out more at anyamartin.com.