I have trouble falling asleep almost every night. Two nights ago, my brain was overactive, and I knew sleep paralysis was creeping into the pores of my skin. I’m used to it at this point. The numbness. The helplessness when it first starts. After years of experiencing it, I know how to get myself out of it. I know the fear is temporary. I know to scream at the shadow hands gripping my throat or imprinting themselves into my shoulders and belly. The world during sleep paralysis is in black and white. The environment is static and quiet. I open my eyes into a gray dimension and I know something is watching me, waiting to get ahold of my body. In these dreams, I am an outsider. I can’t communicate to my physical body that something is watching me.

The imagery and mood director Hideo Nakata encapsulates in Ringu and Dark Water remind me of the landscapes my brain creates during sleep paralysis. His films feel familiar, almost nostalgic. I fell in love with both of these films because of the grainy blue and yellow atmospheres and because of the young ghosts (Sadako and Mitsuko) who haunt the main characters. There’s a cathartic element to the films for me, too. I can see the child version of myself in these two characters. If I were turned into a ghost at the age of seven, a curse would manifest as an aftermath of my death. I say this in jest, but the anger sitting in my throat as a child was volcanic. I was in a flux of confusion and resentment. So much disdain compressed my chest and lungs. I wanted to fill a room with another man’s ashes. This man imprinted trauma into me. He wasn’t a monster. He was just a simple man. I can understand why Sadako imprinted a curse onto the videotape. She tried to climb out of the well in desperation. No one tried to save her. I can understand why Mitsuko haunted the apartment complex. She wanted to be found. She wanted someone to nurture her, even after her death.

It’s 1996 in El Paso, TX, and I am trying to sleep. Someone is watching me. I open my eyes, and the blurred body launches toward me. He drags me by my feet toward the edge of the bed. He could have turned me into a ghost if he wanted. The way he held onto my throat and my mouth as though he was unafraid of letting me suffocate. It was Luis, the father of my younger siblings. He told me to stay quiet. He told me to stay still. I often thought of myself as a spirit sitting in the corner, watching everything happen. I made myself forget about the physical body I was trapped in. I shut my eyes hard until I saw purple swarms of waves against my eyelids. I waited for the silence of him leaving the room. I sat in the dark and I never cried, because it felt like my voice was forced out of me and shoved into the cracked dirt of the desert. I was left with nothing but boiling blood pushing against the temples of my head, infuriated about being so small and frail.

Sleep paralysis coincided with puberty. It started when I was twelve: I am in sixth grade, and there’s a teacher with bright orange hair instructing us on how to use Word for one semester. I raise my hand to ask a question. He walks to my station. He places his hand over my hand on the computer mouse. Thinking it was a mistake, I tried to pull my hand away, but he pressed his hand down harder and tried to lock his fingers into mine. As a shy and nervous child, I said nothing. I wake up in the middle of the night to a black and white world, and I see Luis trying to get into my room. He’s jiggling the doorknob. He pounds on the door and the booming makes the room shake. A shadow floats above me and multiple limbs stretch across the ceiling until I am consumed in pitch black. I scream and I scream, but I can’t wake up.

I have an affinity to Sadako because of the wrath she represents. The world Sadako was born into was not built to hold her. I felt this way about my body as a child. The world was not built for my brown body, but it was built for despicable patriarchs. It was built for men like Luis, who was able to get away with sexually abusing me for so long. I observed the power imbalance between an abusive step-father and an enamored mother. I felt the power imbalance when my body was invaded, probed, and bruised. Those nights, all I could do was freeze in sheer terror and pretend my body wasn’t mine. Years after Luis disappeared from our lives, I had panic attacks at random. I saw red on nights when it was difficult to fall asleep. I was seething with a wrath I was trying to keep to myself.

I have an affinity to Mitsuko because of the loneliness she represents. Abandonment and the after effects of neglect are heavy. I had a brave moment, and told on Luis, but my truth was dismissed. He stuck around for a couple more years. He and my mother had a third child together. I felt very alone. I was a shrinking dot. I wanted to disappear. I was the child who waited for a mother who never showed up after school. I was the child who missed school so many times, staff started asking me questions about my parents, driving me home and demanding answers from a stubborn woman who didn’t bat an eye. It took me a long time to realize what these patterns were. It was neglect. It was lack of interest in raising a young girl who was damaged. Mitsuko was neglected as a child. She was abandoned by her mother. She died, and no one paid attention. She only wanted to be taken care of and loved. I wanted to be cared for and I wanted to feel unafraid to be loved.

One of my earliest memories is of death. Two zebra finches in a cage. I opened the wired cage door and tried to hold onto one of them to pet it. I squeezed the bird too hard, and killed it. I remember screaming and looking up at my mother and feeling deep shame because I knew what I had done. I was three or four. I used to pray hard to God every night. I asked him not to let me die. I was terrified of death, but I was also fascinated by it. As I got older, I went to the library every single day and read a new Fear Street or Goosebumps or anything in the horror section. Anything with people fighting for their last moments. I put myself in their place, asking myself, would I survive? I knew my capacity for survival was tremendous. I survived so much up to that point. I wrote my own horror stories. It was a cathartic practice. The ghosts I wrote about were girls and women. They haunted forests and long, lonely roads. They caused bloodshed with no concern for consequences. They were strong. They were vengeful. They were feared. I was hungry for autonomy. I was hungry for expressing the wrath in my pulsating veins. I wanted to learn how to utilize my anger in an unapologetic manner, and horror stories brought me a piece of solace.

Sadako imprinted her own story onto the videotape. Mitsuko controlled the water in the apartment complex to express her loneliness, anger and confusion. The feelings of wrath and abandonment linger in my lungs, and sometimes I scream them out during sleep paralysis. Other times, I write them out of my body and accept the little ghost girl who will always follow me. 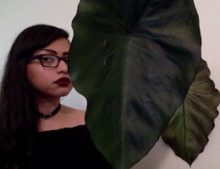 Rios de la Luz is a queer xicana/chapina living in Oregon. She is in love with her bruja/activist communities in L.A., San Antonio, El Paso and Portland. She is the author of The Pulse Between Dimensions and the Desert via Ladybox Books. Her debut novella, Itzá, is forthcoming via Broken River Books (April 2017). Her work has been featured in Vol. 1 Brooklyn, Entropy, The Fem Lit Magazine, Weird Sister Magazine, and St. Sucia. Her short stories have been published in Eternal Frankenstein (Word Horde) and States of Terror, Vol. 3 (Ayahuasca Publishing). Her website is riosdelaluz.wordpress.com.