The H Word: I Need My Pain

There’s a line from Robert Silverberg’s Thorns that I’ve been thinking about lately: “Pain is instructive.” It links up in my head with the similarly evocative phrase “Someday, this pain will be useful to you” (most recently quoted on The Walking Dead), which in turn reminds me of the process I went through with my last book, Experimental Film (ChiZine Publications), for which I won both the 2015 Shirley Jackson Award for Best Novel and the Sunburst Award for Best Adult Novel. Right now, I’m applying that same process to my new novel, Nightcrawling: deliberately excavating a patch of my own childhood memories, ones so painful I’ve spent years literally attempting to forget them, before running them through a filter that hopefully renders them both universal and yet specific at the same time.

Context is important with these things, I guess. In putting Experimental Film together, the breakthrough moment came when—after roughly three years of planning the book’s back-story—I suddenly realized that the only way this fairly complex, extremely specific nested narrative about Ontario film culture, non-linear storytelling, ghosts, gods and the threat of the numinous was ever going to work would be if I made the main/POV character into a version of “me,” i.e. someone whose concerns and voice I understood without needing to work hard. And once I did, everything else flowed organically from that single decision, unfolding in a tangle of bad impulses leading to even worse discoveries, as though the “known,” agreed-upon universe itself were being revealed as nothing more a frosted window that my protagonist’s actions scratched away at, eventually making a hole through which she could catch a glimpse of whatever truly horrifying truths lie at the heart of everything.

This problem of protagonist voice is one that permeates horror literature, quite probably because horror routinely deals with intimate emotional issues, the ones that render us most vulnerable. Caitlín R. Kiernan, who I admire deeply, has talked on many occasions about how she rejected the idea of a first-person narrative for years, because every first-person narrative is by nature unreliable. And of course, she’s completely correct on that point: we’re human beings, after all, not computers . . . we lie or misremember things, sometimes deliberately, or we forget, or we gloss over. Because we see ourselves as the protagonists of our own narratives, we tend to report events as we perceived them, rather than as they actually were, to draw conclusions we couldn’t possibly have drawn at the time, using information that we simply didn’t have at the time—to value things primarily for how they made/make us feel. Sometimes we see things without registering or recognizing them, and sometimes we don’t even understand exactly what we’re seeing, not until so much later that the knowledge is all but useless to us except to provide context in hindsight.

In the end, no one person’s version of events can ever be taken at flat face value—all of it’s subjective and questionable, constantly open to interpretation, which is why (as the most casual Law & Order franchise viewer well knows) prosecutors should never proceed to trial without more than one witness’s testimony backing up their argument. I believe that that’s because we want to tell our lives like stories, because we want our lives to have a meaning, a point; we want them to be controllable, at least in hindsight.

At any rate, it wasn’t until Kiernan finally embraced the concept wholeheartedly, in all its potential chaos, that she was able to write what I consider her stand-alone masterpieces, The Red Tree and The Drowning Girl: A Memoir, both of which are tales told from the POV of narrators so unreliable they barely know themselves what’s happened to them. In one case (The Drowning Girl), said narrator has a genuine diagnosis of schizophrenia, and is well aware that her memories always come filtered through the question of whether or not she was off her meds when they occurred; the narrator of The Red Tree, on the other hand, is simply a writer, which is to say a person who tells lies for money. In both cases, Kiernan uses the narrators’ lack of faith in their own interpretations of past—and current—events to sow seeds of a far deeper underlying doubt throughout, one that barely skirts the edges of stark existential despair. Do the stories we inhabit make sense to anybody but ourselves, and can they continue on after mortality guarantees we are removed from them? Or will they die with us, and thus be lost forever—literally un-told, unremembered, since we are no longer there to remember them?

It’s this sort of inherent unreliability towards which I aspire, making me instinctually frame every horror story I write as a first-person narrative. But even if I’m using a limited third-person perspective, I do my best to stick to a restricted view that ensures we “see” things only through another person’s eyes, stuck inside the moment at the very heart of the action, overborne by sensation and emotion, becoming privy to secrets only as the narrator/protagonist discovers and decodes them. So that even the way we sometimes approach things sidelong, the protective measures we employ to survive trauma, become part of a much larger meditation on the human condition’s internalized existential dread—the fact that as storytelling animals who instinctually organize facts into narratives (first this, then that and therefore this, Q.E.D), we are all on some level doomed to perceive our own lives as simply another variant of the same, a usually moral-less tale that comes complete with its very own beginning, middle and end.

Most often, we choose to invest ourselves in narratives because we feel a kinship with their protagonists, because we can recognize some element of our own experience in theirs . . . but the odd thing about people (or one odd thing, at any rate; one amongst many) is how few of us have any literal sympathy for each other’s joys, or victories, or pleasures. Happiness is discounted, even devalued; what’s that line about how all happy families are alike, while all unhappy families are unhappy in different—and far more interesting—ways? Maybe it’s about the fact that not everyone can recognize happiness, even when they’re inside of it. Which is why the thread these narrative beads come strung on is almost always composed of pain, because pain is the one thing everybody understands . . . a sensation best understood in juxtaposition with its absence, as often dull and grinding as it is immense and blinding, but always worthy of respect either way.

Describing your pain can create sympathy, causing others to compare it to their own; imagining someone else’s pain can build empathy, especially when it reminds you of what you’ve probably already suffered, everything you’ve already dismissed. Because love is different for everybody, but pain is a constant, and we’re attracted to it even as we flinch from it; pain, sad to say, is all too often the mortar that holds all our universes together, fictionally and otherwise. Which is why it definitely remains the engine-fuel always percolating at the heart of why I write horror—either to plumb it, to explain it to myself, or to transform it, to re-make my own weaknesses into a fantasy of wound as superpower, of closure and conclusion.

Things happen for no reason in life, but in fiction, we can rectify that . . . at least, that’s the lie we tell ourselves, over and over and over. An odd fantasy of hope, even at its darkest. 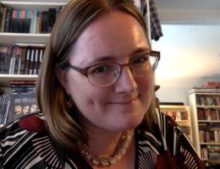 Formerly a film critic, journalist, screenwriter and teacher, Gemma Files has been an award-winning horror author since 1999. She has published two collections of short work (Kissing Carrion and The Worm in Every Heart), two chap-books of speculative poetry (Bent Under Night and Dust Radio), a Weird Western trilogy (the Hexslinger series—A Book of Tongues, A Rope of Thorns and A Tree of Bones), a story-cycle (We Will All Go Down Together: Stories of the Five-Family Coven) and a stand-alone novel (Experimental Film, which won the 2016 Shirley Jackson Award for Best Novel and the 2016 Sunburst award for Best Adult Novel). Most are available from ChiZine Publications. She has two upcoming story collections from Trepidatio (Spectral Evidence and Drawn Up From Deep Places), one from Cemetery Dance (Dark Is Better), and a new poetry collection from Aqueduct Press (Invocabulary).