Poetry, like horror, is an underrated genre of literature (at least in America). Both are frequently maligned for being self-indulgent and masturbatory, though usually for very different reasons. The horror author is labeled a decadent: she’s a sadomasochist, someone for whom physical suffering and mortal terror are both bread and caviar. The poet is stereotyped as a different kind of pervert, one who enjoys the depths of his own navel and the taste of his own toes, and furthermore, one who wants everyone to know this about him. He too is considered a sadomasochist, obsessing about his tortured existence and taking everyone else into his private Hell.

Well. Bugger all of that.

What poets and horror scribes have in common isn’t merely a cursory appreciation of despair. The two groups of artists share a universally human quest toward intimacy. The poet seeks to know the mysteries and irrational forces of the heart and the unconscious, of dreams and love and grief. The language of poetry is usually rich (sometimes rife) with metaphor, and these metaphors are often outside linear comparison. For instance, the moon, to most poets, isn’t just a goddess or a lantern. She is instead a dead yet breastfeeding woman gazing from a hood of bone (Sylvia Plath, “Edge”) or a mouthless face “misted up from inside” (Alice Oswald, “Full Moon”). Come to think of it, many poems about the moon fit easily into the horror genre.

While the poet usually seeks to make meaning from the irrational heart, the horror author wants to find the intimacy in fear or even revulsion, a different set of often-irrational emotions. Fear and revulsion are deeply psychological and thoroughly difficult to hide or repress. They’re common human denominators of the vulnerable mind and body.

The concept of “vulnerable” is an essential connection here: through vulnerability, most life coaches and new age gurus will tell you, comes intimacy. We “open” ourselves and risk grief and pain in order to know something transcendent. Poet and horror author alike specialize in this sublime wave of emotion. As such, these genres share a preoccupation with the supernatural.

Excuse me for quoting the following cliché, but I want to bring it into a new context: Lovecraft asserted that the oldest human emotion is fear, and the oldest fear is that of the unknown. In the same essay, “Supernatural Horror in Literature,” he explains that what makes a tale truly “weird” or spooky isn’t what happens as much as the permeating sense and atmosphere of reality twisting away from us, or the looming terror that something malevolent and indescribable hovers just at the edge of our perception.

It’s no surprise that Lovecraft had a rapturous love for poetry, like Poe before him. Both horror pioneers wrote memorable poetry in addition to their horror prose, and both genres rely on mood and atmosphere. “Horror” isn’t as much about what happens as how the reader feels about what happens. In fact, it’s a rather recent development to have a formal schism between authors of weird tales and poets of the sublime.

From this common ground, horror authors can find much to learn from poetry. Of all literary genres, horror and poetry rely the most on mood, tone, and atmosphere. Whether I’m writing verse or prose, I want to take my readers somewhere uncanny, and, more often than not, leave them there. I want to get under your skin and rasp your bones, and I usually find it easier to do this in poetry. Poetry is an excellent medium to unnerve and disquiet the reader, especially because of poetry’s lack of fear of fragmentary thoughts, grammatically unstable sentences, and extended concentration on a single image or, just as often, a phantasmagoric montage of images. Poets often embrace these rhetorical strategies while the prose author often stops and thinks, “I don’t know if I can do that.” Of course you can.

One of my favorite movements in poetry is the “deep image.” This style, adapted from the Symbolist artists (including their offspring the Decadents and the Surrealists), involves concentrating on a single image and allowing a wealth of strange associations to develop. One of my favorite deep images comes from a surprisingly short poem from the often-horrifying Charles Simic. In “Fork,” he describes the everyday object as, “a bird’s foot/ Worn around a cannibal’s neck [ . . . ] Its head which like your fist/ Is large, bald, beakless, and blind.”

I fucking love this poem.

This deep image style is useful in prose for our “boo” moments. Many horror authors know how to slow the story’s action to a crawl and spend an excruciating span of words describing a moment of menace. If you don’t know how to do this, go read some poetry. Slow down, elaborate, embellish until the act of description itself becomes less an authorial exercise and more the effect that the reader cannot look away—because you’re holding their attention so well.

Sylvia Plath, one of poetry’s queens of despair, wrote a particularly horrifying collection, Ariel, just before her suicide. I’ve learned much from Plath. Watch what she does in “Cut,” a gross little ode to slicing the tip of her finger nearly off while chopping vegetables:

A million soldiers run,
Redcoats, every one

Poetry is full of such teased-along explorations of a single awful thing. I also recommend Charles Baudelaire’s Fleurs du Mal (Flowers of Evil), particularly the poem “Une Charogne (A Carcass or A Carrion),” in which he and his girlfriend see a dead body in the park, pregnant with maggots, eaten at by stray dogs, and he reminds her that she’ll be dead and rotting like this one day. Such a charmer, that one.

The art of compelling description is only the beginning. How to pack such gruesome details into a story without inflating it and drawing it out for too long? Look again to the poets.

Poetry can be anything, any style, but more often than not, poetry values attention to and economy of language. I can tell a prose poem from flash fiction usually by the amount of content the writer can pack into a single paragraph or sentence, and with any luck the prose poem has a rhythm or musicality to the language. See Arthur Rimbaud, a heretical faggot close to my heart, in his “Une Saison en Enfer (A Season in Hell),” translated here by Bertrand Mathieu:

“I called for executioners so that, while dying, I could bite the butts of their rifles. I called for plagues to choke me with sand, with blood. Bad luck was my god. I stretched out in the muck.”

Or how about Swedish horror-surrealist Aase Berg, from “The Hypotenuse” in her collection With Deer:

Yowza! Can you write rhythmic and visceral prose like that? Of course you can. Go do it. And while you’re at it, read some Minister Faust. His short story “The Belly of the Crocodile” is highly poetic and mythic horror.

These lessons don’t apply merely to screamcraft. All prose benefits from poetry’s attention to the word. Angela Carter and Toni Morrison alike have written prose that sings. You don’t have to be as purple as Lovecraft and Poe (though, dammit, be purple if it makes you happy). It’s not all ululating paroxysms and tintinnabulations. You can be as spare and hard as Cormac McCarthy. It’s about pleasing the reader’s ear while freaking them the hell out.

If you’d like some more recommendations and vivisection of the poetics of horror, please visit the archives of my old column, “Intimate Monsters,” which ran for about a year over at Nailed magazine (formerly Small Doggies): bit.ly/nailedmag. 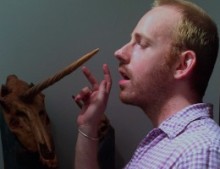