As a kid, however, I never imagined a fusion was possible between these two disparate but equally spine-tingling obsessions. Hell, I didn’t even read a title by a Latino till I was in college—my reaction was something like, “Chingado, you mean we can write books?” In hindsight, it’s bizarre that such a hybrid never occurred to me: the dark intaglio of indigenous-flavored legends of my father’s family tattoos itself so beautifully on the pale, gothic pages of my mother’s. But that’s what mainstream American culture has done for more than two centuries: erase such possibilities, homogenizing diverse voices.

Of course, in recent years, the tide of Latino speculative fiction has begun to rise, ridden by intrepid authors who eschew the tired mainstays of horror, preferring to mine our own folklore in search of terrors that will resonate with our sisters and brothers while also providing fresh scares for the broader readership.

Sabrina Vourvoulias, for example, has spent a lifetime working with oral recountings of Guatemalan nahualism (indigenous shape-shifting). Heir to dark figures of Guatemalan lore (like la Tatuana, el Sombrerón, los cadejos and la Siguanaba), Vourvoulias crafts startling stories that draw from these colonial-era legends. She also evinces another tendency in Latino dark fantasy and horror: to sound the depths of our pre-Colombian past, tapping into the Popol Vuh and other Mesoamerican texts (as well as the oral traditions of indigenous peoples). The compelling, unique narratives she weaves from these sources and the threads of modern genre can be found in her novel Ink as well as stories like “The Dance of the White Demons” and “Flying with the Dead.”

In the case of Silvia Moreno-García, all her work arguably derives from folklore. Certain Dark Things, her most recent novel, explores vampirism using Aztec rather than strictly European traditions about the undead. Her short story collection This Strange Way of Dying wraps modern dark fantasy narratives around a core of Mexican myth, exploring creatures like the alicante and nahual. Moreno-García also serves to illustrate some of the pitfalls of using non-Western elements: her novel Signal to Noise faced some criticism as to the system of magic and the informal way magical lore is passed to young people. However, the book perfectly reflects a technique used in Mexican households to transmit most tradition, through the telling of tales, observation, or simply “doing the work” with an adult on hand, a pedagogical approach known formally as “funds of knowledge.”

Silvia and Sabrina are two among many Latinos engaged in similar work. In Hungry Darkness and Zero Saints, Gabino Iglesias blends barrio, mestizo magic, and psychological horror to amazing effect. Lisa Bradley, in her collection The Haunted Girl and in other work, pulls from her upbringing as a Latina in South Texas and all the attendant lore to craft otherworldly landscapes of desire and pain, belonging and loneliness, creation and destruction. Ríos de Luz (The Pulse between Dimensions and the Desert) and Ire’ne Lara Silva (flesh to bone) bleed together body, brujería, and bleakness in their genre-bending work.

Ire’ne’s collection features a powerful, feminist retooling of the Llorona legend, and that wailing woman stands—an avatar perhaps of colonial anguish, of conquered but not beaten goddesses—at the heart of a great deal of Latino horror. Guadalupe García McCall also reclaims her in the young-adult novel Summer of the Mariposas, and Kathleen Alcala explores the psychology of the figure in “The Woman Who Loved Water.”

The older myths from which la Llorona emerges underpin the dark urban fantasy of Zoraida Córdova and Daniel José Older, both of whom spin indigenous Weltanschauung into dynamic magical worlds that resonate with issues of identity and sociopolitical realities. Javier Hernández does something similar in his indie comic title El Muerto (which was adapted into a movie in 2007), as does Carlos Hernández in “The Assimilated Cuban’s Guide to Quantum Santería.”

Though we’ve not reached the sort of oversaturation as non-Latinos have with vampire and werewolf tales, one of the most ubiquitous creatures in Latino horror and dark fantasy is the chupacabras (yes, there’s an “s” at the end of the singular in Spanish). José Iriarte’s horror story “Cabrón” (Stupefying Stories) utilizes that bloodsucker of modern Latino legend, as does Ernest Hogan’s darkly gonzo “Burrito Meltdown.” Rudolfo Anaya—perhaps best known for his lore-rich Bless Me, Última—has an ongoing young-adult series about the goat-draining aliens.

The creature struck me as the perfect antagonist for the title story of my latest book, Chupacabra Vengeance. Like many of the dark tales in the collection, this piece marries some bit of Latino folklore (chupacabras) with an issue relevant to the modern Latino experience (in this case, the immigration of unaccompanied minors from Central America), braiding them into a narrative that makes full use of the tools of speculative fiction. Other legendary beasts play similar roles in the remaining thirteen shorts. Where I don’t pull from legend, I use Aztec and Maya mythology to shape Latino cosmic horror, young-adult fantasy, and Mexican kaiju. That’s how flexible this heritage is.

There are certainly risks Latino writers face when we decide to incorporate such cultural elements. One is the potential alienation of a mainstream readership, what we might term the “emeffing Elvish effect” after the famous observation by Junot Díaz that “Motherfuckers will read a book that’s one-third Elvish, but put two sentences in Spanish and they think we’re taking over.” In today’s socio-political climate, of course, there’s legitimate worry this alienation might become animosity.

The other risk is the othering of our heritage. No Latino purveyor of speculative fiction sets out to be pigeon-holed as a “regional” or “ethnic” writer, a go-to when you’ve a hankering for something exotic. Our stories are just as universal as any author’s, and it’s demoralizing to become a sort of side-show to the main event of the Anglo-American horror scene. And I haven’t even touched on the Spanish-language speculative scene throughout Latin-America, to which we are also outsiders. Entre la espada y la pared. Devil and the deep blue, friends. Always in the middle.

Yet, in the final analysis, we English-speaking Latinos tend to see ourselves as part of a community. Each of us hopes—whatever our individual contributions—to widen the door a little further, to reach down a hand to pull more raza up with us. Ultimately, the genre will surely benefit from an infusion of diverse voices and unique cultural traditions.

If horror—tales of unseen dangers lurking beyond the circle of firelight—is as old as humanity, then certainly Latinos, with our roots going back to Olmecs and Incas and beyond, have much to contribute. 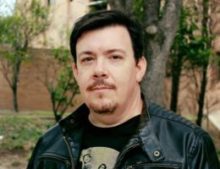 David Bowles is a Mexican-American author from south Texas, where he teaches at the University of Texas Rio Grande Valley. Recipient of awards from the American Library Association, Texas Institute of Letters and Texas Associated Press, he has written several titles, among them the Pura Belpré Honor Book The Smoking Mirror (a juvenile fantasy), Lords of the Earth (a Mexican kaiju novel), and the collection of speculative shorts Chupacabra Vengeance. Additionally, his work has been published in venues including Rattle, Strange Horizons, Apex Magazine, Mithila Review, Stupefying Stories, New Myths, Electric Spec, Eye to the Telescope, Asymptote and SQ Mag.