The H Word: Horror that Rocks

Music has always been used to tell stories. Ancient epics were written in verse, ballads were a means of spreading popular legends—there’s something about the combination of plot, character, rhythm and rhyme that helps a story stick in the mind when music is used to help spin a yarn. Naturally, musicians have all sorts of interests, so the stories they tell are as diverse as those you’d find in a bookstore—which means that genre fiction is represented alongside romance and action. Genre music flourished in the 1970s especially, with many bands taking psychedelic inspiration from fantasy classics such as Tolkien’s Lord of the Rings, and science fiction as well (P-Funk’s multi-album epic about Star Child, Dr. Funkenstein, and the evil Sir Nose D’Voidoffunk stands out), but horror finds a place for itself as well—my personal favorite being in the music of Warren Zevon, specifically his third studio album, Excitable Boy (1978).

Excitable Boy tackles a diverse array of distressing subjects, from brutal breakups to the occupation of Veracruz—but it’s most remembered for the songs that deal specifically with more traditional horror tropes such as ghosts, serial killers, and werewolves. “Roland the Headless Thompson Gunner,” “Excitable Boy,” and the top-40 hit “Werewolves of London” come one after the other on the album, all showcasing the singer/songwriter’s love of the macabre and grotesque, as well as strong beats and striking chord progressions. They all also deal with the horror of the everyday in unique, darkly humorous, and disturbing ways.

“Roland the Headless Thompson Gunner” is the most tonally serious of the trio of songs, both in terms of content and musical cues. Co-authored with an actual ex-mercenary, the song is a classic ghost story and ballad about a Norwegian killer for hire who is murdered by a colleague during the aftermath of the Nigerian Civil War. Coming back from the dead, he kills his killer, and then goes on to become a phantom assassin, showing up all around the world over the next decade.

While obviously the content of the song is supernatural, the setting is historical, real, and all too familiar: bloody confrontations made bloodier by hired mercenaries. The song cites several incidents where Roland, as a ghost, flames the fires of conflict—Ireland, Lebanon, Palestine, and Berkeley are all mentioned—but the reality of those incidents was terrible enough without eternally wandering Thompson gunners showing up to take out agitators.

And yet, there is an undercurrent of wry humor that is characteristic of both Zevon and how we as humans tend to deal with the omnipresent, everyday horrible. Van Owen, the antagonist, decapitates Roland—hence the headless nature of the phantom Thompson gunner—and the song notes that when Roland gets his revenge he “doesn’t say a word.” Naturally! The various conflicts are also described as “peaceful wars,” as well—reminiscent of the spin we’re accustomed to from politicians invested in perpetuating international conflict.

“Werewolves of London” is almost the inverse of “Roland the Headless Thompson Gunner,” in terms of its terms of its treatment of its subject matter, and the overall feel of the song. Instead of a somber saga invoking endless globe-spanning warfare, it’s an upbeat pop hit about small-scale violence: little old ladies getting mutilated and well-dressed monsters ripping people’s lungs out. It’s a bizarre song, but it’s easy to see why it became such a hit (beyond the obvious pleasure of listeners being able to sing “Ah-hooooo, werewolves of London” several times over the course of the tune). It deftly pairs the silly with the obscene, the uncanny with the common.

London, in the song, is the London we know: SoHo exists, and Mayfair and Kent are name-checked along with, famously, Trader Vic’s. And yet, it’s not the London we know. Werewolves prowl around kitchen doors, and walk through the streets of busy areas of a rainy night looking for beef chow mein. It’s absolutely absurdist, and in the context of the cheerful chord progression and repetitive piano part, it’s an amusing enough image; clear karaoke fodder. But, the more one thinks about the idea—the rain-soaked streets of a city being home to hungry monsters—the weirder it is. If you’re anything like me, more than once you’ve looked at a stranger and thought, “vampire” or “werewolf” (I’m convinced one works at the post office here in Boulder, at the corner of 55th and Pearl). And yet, creepier still is the truth, that some random hairy-handed gent is not a monster—not necessarily, at least. The real monsters of London (or anywhere) are often invisible, and dangerous for reasons far less predictable than the phase of the moon.

Which, of course, brings us to “Excitable Boy,” easily the most disturbing track of the album, and likely by design the one most relatable to the everyday. “Excitable Boy” is the unnerving tale of a deeply disturbed young man who rapes and murders a girl, but worse somehow is how seemingly everyone in the kid’s life just shrugs their shoulders about it—even when after ten years in treatment he returns home to dig up his victim’s grave and make “a cage from her bones.” He is, after all, “just an excitable boy.”

“Excitable Boy” is in many ways just as horrifically absurd as “Werewolves of London,” but differently so—its absurdism is in its terrifying plausibility, rather than the reverse. While it’s unlikely any of us will find ourselves walking beside a werewolf on the prowl for some quality Chinese food, we need only watch the news to see various manifestations of the violent tendencies of young men—as well as the excuses we, as a society, make for them. (Even with the data on my side, I feel awkward typing the above—and I’m hardly one to opine #NotAllMen during conversations about male violence . . .)

“Boys will be boys” may be a more common refrain in everyday life than “Excitable Boy,” but from the Glen Ridge rape in the 1980s to more recent incidents like Penn State and Steubensville, communities have shown time and again that they prefer to protect boys and men, as well as turn a blind eye to patterns of behavior, rather than do anything to prevent incidents of violence. People make excuses for mass shooters, shrugging their shoulders and repeating “how were we to know?” even after Internet dating profiles full of guns and troubling references to socially regressive notions of race or gender surface, or even social media accounts which actively display white supremacist images.

While to my knowledge the perpetrators of the above incidents haven’t gone so far as to dig up anyone’s grave, post-treatment or prison, the idea of “why would we/the media try to ruin their bright futures!” was a horrifying refrain during the Steubensville case in particular, but also during the Sandusky trial—the rights of the perpetrators were clearly more of a concern to many than those of their victims. (Nothing was done about Zevon’s excitable boy after he “bit an usheress’s leg in the dark,” and given Zevon’s sharp observations, why is very possibly a question he wants us to ask. Of course, we already know the answer.) Really, this broader cultural tendency to turn a blind eye is in many ways more horrible than the actual violence of any individual or small group.

And “Excitable Boy” spins that sense of horror around yet another time, by means of its pop feel-good aesthetic. It’s easy to condemn the boy and his community, but we’re the ones humming along to the ditty about them. We’re so desensitized to incidents of rape and murder that we’re able to detach from the horror and laugh. Don’t get me wrong—I love the song, and have been known to belt out an “oooooh-ooooh, Excitable Boy!” while driving or housecleaning. When horror is an everyday occurrence, we toughen up about it in interesting ways.

Music, just like the visual and literary arts, is a lens through which artists can focus social critique—and play on our fears, be they large scale or small. It’s just that Zevon happens to do that with a wailing sax and Linda Ronstadt on backup vocals (or cheery piano refrains, or whatever else). Like any good horror writer, he evokes mood when working in the mode, be it serious or irreverent, just like any good horror tale. It’s just that his horror stories stick with us, not (necessarily) because they haunt our nightmares . . . but because they’re really, really catchy. 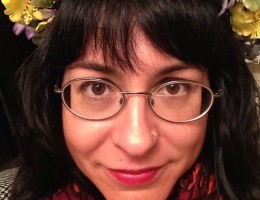 Molly Tanzer is the author of Creatures of Will and Temper, Vermilion, and The Pleasure Merchant, as well as the British Fantasy and Wonderland Book Award-nominated A Pretty Mouth. She is also the co-editor of Mixed Up: Cocktail Recipes (and Flash Fiction) for the Discerning Drinker (and Reader). For more information about her critically acclaimed novels and short fiction, visit her website, mollytanzer.com, or follow her @molly_the_tanz on Twitter or @molly_tanzer on Instagram.