The H Word: Ghosts in a Void

. . . the ghost lingers because we need it to. The ghost promises some retention of self, long after we’ve stopped metabolizing.

Of all the strange beings and monsters wandering through horror fiction, my favorite, and the one I’ve chosen to depict in my writing, is the ghost. For a number of reasons, I’ve portrayed spirits of the dead in two distinctly different ways, constructing a fictional world with no higher power in evidence, in which lingering spirits either create meaning for themselves or are compelled by forces they don’t comprehend.

First of all, why ghosts? My primary interest as a writer is to ask and keep asking what it means to be human in a world indifferent to humanity. To my mind, a ghost, proceeding as it does immediately and directly from the individual after death, expresses many of our most intimate concerns—fear of mortality, loss of identity, loss of agency—while retaining at least a vague semblance of what was once physically, entirely human. A ghost is not a bizarre transformation initiated by an outside force. It may be seen, instead, as a last attempt at holding onto life and selfhood.

As you can probably guess, the topic has been on my mind for a long time. An assignment I remember well from graduate school was a paper on the representation of ghosts on stage. After I’d spent hours plodding through stacks of theatre journals and dissertations, I was only able to hammer together a dense, quote-heavy article with a stilted tone. Yet, of all the projects I completed during those three years, ghost representation is the subject still loitering in my imagination. I’m fascinated with attempts at depicting ghostly spirits in films, in stories, and in live performance.

The secret passages, ropes, levers, and pulleys designed to make actors appear inexplicably in Greek tragedies were very early attempts at suggesting the incorporeal on stage. Less clumsy and more tricky and sophisticated was the nineteenth century “phantasmagoria” method of projecting images onto smoke, so that they might seem to drift across space. Soon after, the illusions developed by John Pepper included appearing and disappearing figures and objects, an effect achieved with lighting and sheets of glass. The manner in which a ghost is indicated or presented varies depending on the era, the culture, the medium, and the artist—but the appeal of a visitation or haunting remains powerful.

Tales of spirits who return from the dead date as far back as ancient history, signaling the idea of a division between physical and spiritual existence as well as uneasiness regarding an afterlife. But what is the purpose of the ghost as a storytelling device?

Shakespeare used ghosts (such as Julius Caesar and the Elder Hamlet) to remind the living of promises and obligations yet to be fulfilled, or (in the case of a character like Banquo) as a memento mori to spur the living (Macbeth) to admit wrongdoing. For M.R. James’ Victorian audience, the telling of an annual ghost story served as festive entertainment while the story itself was often a warning against hubris and meddling in matters the human mind can’t hope to understand. (In a particularly creepy M.R. James tale, human hair woven into the fabric of bedroom drapery seems to possess a supernatural connection to its long-dead source.)

In more recent literature (from Beloved by Toni Morrison to The Little Stranger by Sarah Waters and The Lovely Bones by Alice Sebold), a specter conveys the weight of past experience. It also serves as the means to test or enlighten living characters. In some cases it reaches out to a loved one to solve a mystery or allow resolution or redemption. In this kind of story there’s an underlying presumption that death presents us with new wisdom about the nature of the universe and our place in it.

My enduring obsession will seem more peculiar when I admit I don’t believe in ghosts or an afterlife as such. My skepticism is combined with a twisted interest in people who do believe. It’s fascinating to me when friends share anecdotes describing ghostly occurrences, more so if they try to convince me with elaborate details. I know there was a time when I was more open to ghosts as a possibility and not just a literary device; I wonder if my vicarious interest isn’t woven together with envy. Maybe the idea of a haunted world is alluring because so many people accept it wholeheartedly (if the proliferation of ghost-hunting TV series is any measure).

My stomping ground is the delusional arena constructed by our minds in a passionate attempt to conjure or connect with something eternal. Given my suspicion that the only “spirit world” is a projection of our desire for immortality, our wish to reunite with loved ones we can’t bear to lose, and a craving for reassurance in the face of an unsympathetic universe, the exact nature and form of the projection is significant.

In print, an author has time to build a character’s state of mind, connecting ghosts with psychological conditions in a fairly subtle manner. Consider the governess in The Turn of the Screw. Is she mad? Or is she possessed? Are the children in her care possessed? Henry James doesn’t explain the heart of his story. To explain it would let the reader off the hook, and one of the great pleasures of The Turn of the Screw is how well it lends itself to interpretation.

To achieve this objective, James avoided what he considered distasteful, traditional representations. There are no rattling chains or howling winds. The governess sees her predecessor Miss Jessel with her lover Peter Quint in seemingly human form, apparently alive, yet never acknowledged by other members of the household. It’s an elegant conceit. The governess becomes convinced that the children are also aware of Jessel and Quint, but this may be a tantalizing game they’re playing or a malevolent delusion the governess projects onto them.

Published more than a century after The Turn of the Screw, Sarah Waters’ novel The Little Stranger is another gothic story centered on a ghostly presence, this one manifested at an eighteenth century family estate fallen into disrepair in the wake of World War II. Waters paints a meticulously researched portrait of British society in transition. The physical descriptions fit the nostalgia of the central character, Dr. Faraday, who recalls the waning grandeur of the estate as he viewed it in childhood. This attachment to the once beautiful mansion is crucial to the story. No wonder the author expresses the influence of spirits through the house itself. Burn marks appear on the bedroom walls. The maids hear bells summoning them when no one is there. And the use of a nineteenth century tube communication system is nothing short of terrifying.

As I said earlier, I’ve so far created two ghost forms in my work. In the novel Knock Knock and a related novella, In the Light, an outraged spirit seeks to live again by invading living forms—plants, birds, infants, and children. This relentless pursuit of the sensation of life is a driving force not necessarily influenced by any deity or religious faith.

By contrast, my novellas Delphine Dodd and Astoria offer up the dead as nearly intact figures wandering through and crossing paths with certain people closely attuned to nature. The focus here is upon the location itself rather than the outraged individual, emphasizing the spirit of place created by many people over a long period of time.

In I Wish I Was Like You, I’ve further elaborated upon the idea of transformation, indicating different forms acquired after death. Those who die of natural causes and accidents are no longer present. Since the book expresses my own existential doubts, no one knows where these individuals go. On the other hand, suicides merge with the city’s moss and sludge, climbing over buildings, struggling pathetically to separate and to be seen or heard, unable to rest or let go. Murdered people (like my protagonist) may accept their fate and fade away (to who knows what or where) or they may refuse and linger, haunting the living.

Whether or not ghosts exist, in the fictional world they are a creation of culture and imagination, reflecting the era in which they were written. Ultimately, the lasting power of a ghost story is less about shock value and more about its ability to remind us of our fragility in a vast universe. I can’t think of any more apt metaphor for the human experience than a ghost wandering in a void. 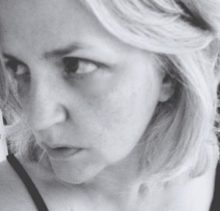 S.P. Miskowski is a multiple Shirley Jackson Award nominee whose stories appear in numerous magazines and anthologies including Supernatural Tales, Black Static, Strange Aeons, The Cabinet of Dr. Caligari, Looming Low, Haunted Nights, Tales from a Talking Board, and Darker Companions: Celebrating 50 Years of Ramsey Campbell. Her four-book series, the Skillute Cycle, is published by Omnium Gatherum. Her novel I Wish I Was Like You is available from JournalStone and her story collection Strange is the Night is published by Trepidatio, an imprint of JournalStone.