I am eleven years old when my mother asks me, Why do you have to write such dark stories? Why can’t you write something edifying? At the time, I have no answer for her, and I mistake the tight line of her mouth for disapproval. I miss the concern in her eyes, the distress in the set of her shoulders.

I think about her question for many years. But at the time, I remember wondering, What is edifying about stories that don’t reflect the real world?

I am nineteen years old when I am sexually assaulted.

We are standing outside of an apartment, and he is asking me to come in and enjoy the party. I tell him, It’s not my scene, and I’d rather go home, and I don’t want drunk people groping me. At that last one, he laughs and says, Like this? and then he crushes our bodies together, and his hands are all over me, and it is so awful that for a moment, I forget how to speak.

You are a tiny lightning strike, he tells me once. Small and fast and fierce. You could set the world on fire. He is right—I am small, and I have a woman’s body, and I wonder how much he thought he could get away with because of it.

He is right. I am fast, and small, and that is how I survive that night. But there are things—his attitude of entitlement toward my body, the racialization and sexualization of the violence he has inflicted on me, the fear and burning rage that bubble up in me later—that stay with me.

For a long time, I don’t talk about it. But I think about them, and I write.

I am in Chicago, many years later, moderating a panel on the moral responsibility of the storyteller. One panelist brings up short stories by Angela Carter and Shirley Jackson. These stories are so dark, she says. She is right, and there is wonder and fear in her voice. So bleak. To write something like that . . . it takes a certain rage.

As I take notes on a piece of hotel stationary, I write down, in clean letters at the very bottom of the page, a certain rage. I underline that phrase several times. It touches something in me, resonates, deep and soft.

When the panel is over, I tuck the slip of paper into my journal for safekeeping. In the upcoming weeks, I take the paper out and reread it over and over again.

It takes a certain rage.

I am just out of college, and for the first time, someone tells me that what I am writing is a horror story. She says, Have you read your own work? It’s so full of violence and terrible people doing terrible things to each other. It’s so scary.

Another friend sits quietly at the lunch table. She doesn’t say anything, but when I catch her eye, she nods. I realize, then, that instead of being put off by the ugly things I write about and looking at me with judgment and fear, she views them with the compassion and acknowledgment of someone who intimately understands. It is horror, yes, but it is a horror that we have both seen face to face.

That afternoon, I sit alone in my room to work on the workshop piece due that week. I have been trying to write a story about mermaids for about a year now, and as I go over my draft, I find the connection I’ve been missing.

I think about mermaids, and I think about bodies. I think about old stories about how sailors, horny and violent, mistook animals like manatees and dolphins for mermaids and imagined women’s curves and pliant willingness where there were none. I think about the racist infantilization and fetishization of Asian women. I think about the epidemic of college sexual assault. I think about the stories that my friends have told me, quietly in the evenings, holding my arm so tightly for support that my hands go numb. I remember the feeling of him on my body, the feelings of betrayal and shock, the heat of him, the mixture of contempt and satisfied possessiveness on his face.

I write “The Fisher Queen.”

I don’t apologize for it.

I am twenty-four years old when a good friend of mine approaches me with a question similar to the one my mother asked me when I was eleven, all those years ago. But this time she says, My mother is afraid because of the stories I write. She doesn’t want me to have to go to a dark, sad place in order to write sad, dark stories. What do I tell her?

Our mothers are always afraid. They want what is best for us, and they know the reality of how horrifying the world can really be. They don’t want us to have to traverse imaginary horrors when the world is already full of real ones.

Tell her, I say, staring at the wall above my computer, that the truth is, we don’t have to go to sad, dark places to write our stories. We write our stories to cope with what we’ve already seen.

We have always lived in this place, occupying our bodies and suffering the injustices and very real horrors that come with existing in hostile spaces. And so we write with eyes focused forward, because there is no way to not be who we are. Fiction gives us the tools with which to break our silence and name our demons so that other, unhaunted people can see them for what they are. To crystalize our monsters, and then to shatter them.

My stories are dark because I live in a dark place, and because to me, the most edifying stories are the ones that reflect, and then subvert, the given truths about the way the world deals with people like me.

Horror is only one storytelling mode of many. But it is my preferred mode of entertainment and exorcism, a space where fear can be manipulated and conquered, where terror and play, the real and the imaginary, can exist side by side. And when I write, I do so from a place I have always occupied, sitting quietly in peace with a certain rage. 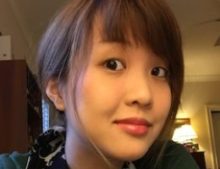 Alyssa Wong studies fiction in Raleigh, NC, is a John W. Campbell Award finalist, and really, really likes crows. Her story, “Hungry Daughters of Starving Mothers,” won the 2015 Nebula Award for Best Short Story, and her short fiction has been shortlisted for the Pushcart Prize, the Bram Stoker Award, the Locus Award, and the Shirley Jackson Award. Her work has been published in The Magazine of Fantasy & Science Fiction, Strange Horizons, Nightmare Magazine, Black Static, and Tor.com, among others. She can be found on Twitter as @crashwong.