I wasn’t focused on any particular genre when I started my writing journey, but in an odd sort of way, my five-year-old self had it all sussed out. I was a dreamy little kid who loved reading and making my own books, and more than that, I adored fairy tales. It may seem strange to some, but I do wonder if that’s why I write horror. In many ways, fairy tales could be seen as the first horror stories, full of terrors such as the death of a parent, being eaten alive, or being abandoned.

In Hansel and Gretel, the children are left to their fate in the forest because there isn’t enough for the family to eat. The parents in Rapunzel and Rumpelstiltskin trade away their babies. Bluebeard tests his wives’ obedience and murders them when they fail. There is enough betrayal, jealousy, murder, cannibalism, and cruelty in the stories to satisfy any horror fan.

Before any concerned parents ban their kids from fairy tales forthwith, I would add that I didn’t find such things particularly terrifying at the time. When the Grimms first published their collected fairy tales, they added a warning that they weren’t suitable for children; and yet children revel in tales of the macabre, don’t they? I don’t remember being afraid, just deliciously enthralled. In fact, the only story I remember being disturbed by was The Little Mermaid by Hans Christian Andersen, in which the heroine sacrifices all to win the love of a prince who never loves her back. Even then, it made me cry rather than frightened me, and I loved and broke my heart over it in equal measure. The grue and the gore of fairy tales wasn’t an issue. After all, they’re only stories, safely contained within the pages of a book. And perhaps that was their purpose, back when fairy tales were part of an oral tradition of story-telling—to gather a little closer to the fire while people told their horrific tales of wolves and witchcraft and other dangers which were once rather more present than they are today.

Back then, fairy tales weren’t safe. They weren’t even kept within the pages of a book. There were times when fairies, or the little folk, were believed to occupy the hollow hills, sometimes helping humans and sometimes harming or hoodwinking them. People falling foul of them could be “fairy struck,” which gives us the origin of the word “stroke”. Young women or babies could be stolen away as changelings and replaced with a double that would become querulous or sicken and die. The concept is fascinating—so much so that I’ve just written a novel, The Hidden People, around it. It is also terrifying. What if you weren’t sure that the people you love are really who you think they are? It’s a long way from the sweet and airy visions of Disney.

Even today, I think it’s true that fairy tales are more disturbing to the adults they were originally intended for than to children, and not just because of the murders and maimings that often take place within them. I was a little shocked when I recently re-read The Red Shoes, again by Andersen, not for its depiction of the poor child being forced to dance until she begged a woodcutter to chop off her feet, but because all this was a punishment for not concentrating in church. We are unused to such moralistic didacticism. Another example is Perrault’s 1697 version of Little Red Riding Hood, which reflects the tension arising when turning an oral tale for adults into a written story for children. The inventive Little Red no longer escapes by her own wiles but is eaten by the wolf, and Perrault makes no bones about the reason. He appends his own “moral” to the tale, warning young ladies not to talk to strangers.

Of course, Little Red also has more sinister overtones, with the wolf representing a sexual predator, but as a story for young children it still seems a woefully harsh punishment for stepping off the path on the way to grandmother’s house. What horrors redound upon a simple lapse in concentration, or indeed a little wilfulness! And yet, that is what Perrault’s versions were intended for—they became instructive tales for young ladies and gentlemen. The Grimms, too, added more Christian and moralistic elements as they gathered and rewrote their stories.

There is a parallel here to be drawn with horror fiction, which is often accused as being the most conservative genre in terms of good triumphing over evil. Indeed, since it examines issues so fundamental to humanity as loss and death and what might come after, it would be difficult to evade issues of morality. I have read (and indeed written) stories where the forces of good do not triumph, but I always feel that readers’ sympathies should be in the right place. And let’s not forget the slasher flicks, where having sex is a sure-fire way to be first under the killer’s knife.

As fairy tales became part of a literary tradition, it wasn’t just the moral aspects that came to the fore. They were also adapted and edited to remove the nasty bits—or as some would say, censored and bowdlerized. Some of the originals were clearly too close to horror fiction for comfort. The stories adapted for children were also made emotionally safer. In early versions of Hansel and Gretel or Snow White, it is the children’s own parents who abandon or try to kill them. Later, we have the invention of the wicked step-mother to make the cruelty a little more distant.

In an early version of Cinderella, the stepsisters cut off their heels and toes to try to make the glass slipper fit. They get their come-uppance, however, when birds peck out their eyes. In different versions of Snow White, the huntsman is ordered to kill the heroine and bring back various items to prove she’s dead: variously a bottle of blood, her heart, her intestines and a blood-soaked shirt, or her lungs and liver, which are to be cooked and eaten by the queen. The violence isn’t restricted to the baddies, either. In The Lost Children, an early version of Hansel and Gretel, the devil and his wife take the place of the witch, and the children escape by slitting her throat.

There has been sexual censorship too. In the 1634 version of Sleeping Beauty by Italian poet Basile, the king who finds his Beauty doesn’t stop at kissing her but rapes her while she is sleeping. She only wakes after giving birth to twins, when one of them sucks a bewitched splinter from her finger. The witch imprisoning Rapunzel only realises she has been visited by the prince when she notices her swelling belly.

When I wrote my novel Path of Needles I was largely addressing the question of what if such things weren’t kept safely within the pages of a book, but happened in our world of today. It isn’t just about fairy tales but their history; the protagonist has to discover the different variants of the tales in unravelling the plot. I discovered gore aplenty during my research, and that was in tales that are reasonably familiar. I didn’t even start on some of the ones that have been more resistant to adaptation over time but have instead faded into obscurity: such as How Some Children Played at Slaughtering, which is included in Jack Zipes’ recent translation of Grimm’s original tales—The Original Folk and Fairy Tales of the Brothers Grimm. Here, brothers play at being a butcher and a pig. The butcher slits his brother’s throat. The enraged mother comes running, grabs the knife and stabs the murderous child. While she has turned her back, however, her baby drowns in his bathtub and she hangs herself in remorse. When the father comes home, he—well, he just dies of sadness. What else would he do?

Whether they match that level of bloodthirstiness or not, there are plenty of writers who have brought back the wild, wicked, dangerous fairies of old and aimed them firmly at adults, such as Angela Carter in The Bloody Chamber or A.S. Byatt in The Djinn in the Nightingale’s Eye. We also have anthologies by Ellen Datlow and Terri Windling, and work by Neil Gaiman, Sarah Pinborough, Angela Slatter, S.P. Miskowski, Tanith Lee, and the much-missed Graham Joyce. Fairies refuse to go away and they refuse to capitulate to our attempts to make them safer, perhaps because they represent the wild, sensuous, dangerous, untameable, mysterious, creative parts of ourselves.

Oddly, it was only recently that I realised that my favourite Stephen King novel, The Girl Who Loved Tom Gordon, is essentially a take on Little Red Riding Hood. King’s version even represents a return to a more resourceful heroine; his little girl lost in the woods certainly has no woodcutter to come and rescue her but must find a way to survive. And Carrie could be seen as a version of Cinderella. She’s the downtrodden and isolated girl who thinks she has a chance to become a princess, at least in her own little world of high school, at her ill-fated ball. In a book by Tony Magistrale, Stephen King: the Second Decade, Danse Macabre to the Dark Half, King commented: “To my mind, the stories I write are nothing more than fairy tales for adults.”

I couldn’t agree more, though I’d probably remove the “nothing more.” I love fairy tales now every bit as much as when I was that enthralled little kid of five. They contain so many of the things I love in fiction: beauty, darkness, the wildest reaches of the imagination, mystery, the unknown, and of course the potential for a little bit of magic to exist in the world. And it is a very small step from the magic of fairy tales to the darkly supernatural strangeness of some of my favourite horror fiction; but then, fairy tales always were pretty dark. 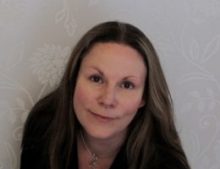 Alison Littlewood’s latest novel is The Crow Garden, a tale of obsession set amidst Victorian asylums and séance rooms. Her other books include A Cold Season, Path of Needles, The Unquiet House and The Hidden People.

Alison’s short stories have been picked for many Year’s Best anthologies and published in her collections Quieter Paths and Five Feathered Tales, a collaboration with award-winning illustrator Daniele Serra. She won the 2014 Shirley Jackson Award for Short Fiction.

Alison lives with her partner Fergus in Yorkshire, England, in a house of creaking doors and crooked walls. She loves exploring the hills and dales with her two hugely enthusiastic Dalmatians and has a penchant for books on folklore and weird history, Earl Grey tea and semicolons. You can talk to her on Twitter: @Ali__L, see her on Facebook or visit her at www.alisonlittlewood.co.uk.