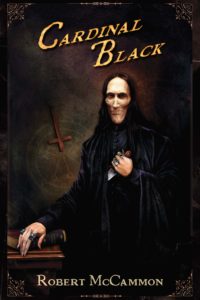 Robert McCammon’s Matthew Corbett series, involving the adventures of a professional problem-solver based in colonial New York around the early eighteenth century, requires the talents of a horror writer, but has never had both feet planted in the genre; it obviously owes as much to historical fiction, and some reviewers have unaccountably compared the protagonist to James Bond, a figure who is much more cynical, misanthropic and openly cruel than Corbett has ever been, even on his worst day. Corbett is something else, a wounded idealist, picking up battle scars in his various encounters with the person of his world’s version of Moriarty, a supervillain of sorts named Professor Fell.

So far, the series has given this reader one of his all-time favorite escapes from a deathtrap ever; two of the greatest novel-ending cliffhangers ever; and multiple terrific brushes with death in close quarters, but to date, horror has always been its spice, one ingredient in a rich stew.

The latest, Cardinal Black, brings the genre closer to the forefront. The titular madman is a rival to Professor Fell, whose fortunes have fallen of late, whose own interests run to demonology, and whose ultimate ambitions involve the summoning of infernal forces. This is a thread poised to continue past this novel (of the nine McCammon has planned for the series as a whole), and it is a measure of just how gaga the series has become that this reader remains absolutely uncertain whether he’s just a nutcase or a guy possessed of the ability to bring that ambition to fruition. It will mean the sudden introduction of outright fantasy elements to a historical world that has largely limited itself to applying the logic of pulp fiction to historical realities. Corbett is vocal on the guy being a nutcase. He might well be right. This may also turn out to be one of those literary cases where something supernatural seems to happen, but is arrested before enough evidence accrues to establish one way or another whether it has. But McCammon has invested the series with enough uncertainty that this reader, at least, will not be shocked by any outcome. Demons may show up. Or the threat might be entirely human. Who knows?

In the meantime, what we’re left with is the immediate crisis of this novel. The action has moved to England. Professor Fell has given the woman Matthew loves, Berry Grigsby, a drug that will gradually and permanently destroy her mind. She is already a shadow of herself, and will be reduced to permanent mindlessness within weeks. The antidote is in the possession of Cardinal Black, and because Fell wants Matthew’s services, he has given our hero leave to track down that villain, get the formula, and bring it back. The quest will involve disguises, fights to the death, and a room full of what can only be described as subsidiary supervillains that include a murderous woman who sometimes goes by the name of Rakehell Lizzie.

It needs to be said, though, that none of this would work if the characterization of even subsidiary characters were not splendid. Matthew’s traveling with a partner, Julian Devane, who kills as easily as he breathes, but he’s not quite as simple to explain as all that, and along the way we get a visit to his estranged father, and in particular to his disabled brother, that is as heartbreaking as it is lovely. Did McCammon have to make this interlude so memorable, when narratively it’s just a speed bump delaying the arrival of Matthew and Julian to their deadly rendezvouses in London? Answer: damn straight he had to. The best novels are not straight lines. They find equal wonder in the stops along the way. 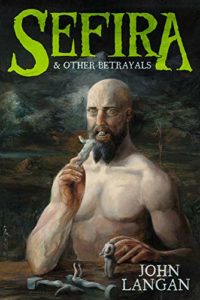 The title piece of John Langan’s collection Sefira and Other Betrayals, is an actual, no-kidding, full-length novel, some 57,000 words, that functions as a small masterpiece of beginning a story in the middle and filling in the backstory later. Our half-mad protagonist, Lisa, is engaged in a long and serpentine road trip through the Midwest that at first appears to have no purpose beyond mileage. Other, more terrible, things are happening, though, and so the very first sentence is, “Lisa looked in the rearview mirror and saw that her eyes had turned black.” There is a degenerative process going on here, and it involves the title character she’s chasing, Sefira, who has had an affair with Lisa’s husband. Further developments reveal what happened between them, what Sefira is, and just how Lisa knows where she’s going—all grounded in the particulars of the trip, the stops at various fast-food restaurants and roadside motels, and the worsening of Lisa’s condition. I am forced to report that the unrelenting buildup is more satisfying than the climax. But, oh, that buildup. Every actual revelation of the true awfulness that’s going on is another opening of the nested puzzle box that forms the whole.

At press time, your indulgent friend the reviewer has only penetrated a few stories into Echoes (Saga Press), the latest anthology from vital editor Ellen Datlow, this one centering on ghosts. And so this is not a review, merely a head’s-up. The book has just about 800 pages of primal supernatural from contributors that include the aforementioned Langan, Pat Cadigan, Joyce Carol Oates, Alice Hoffman, Paul Tremblay, Dale Bailey, and many others. It has become a cliché, to describe fat anthologies as “mammoth,” and the word is rendered even less useful by the existence of an existing line of anthologies that are billed as the Mammoth Books of this, that and the other thing; they’re all elephants. But the handful of tales I have read so far are terrific, and experience suggests that you will be well-served by investigation of the rest. As I have said, not a review, but a head’s up. But when Datlow’s keen eyes are involved, one can guarantee it’s at the very least an informed head’s-up.