What was the inspiration behind this story?

You chose not to name your characters—why?

From a plot and story point of view, at this point, the narrator can’t even remember his own name, let alone hers. She has no real need to tell him her name—in fact, it’s in her interest not to tell him, in the extremely unlikely event that he manages to escape.

From a deeper point of view, I’ve encountered several medical people who get my name wrong even as they are running medical tests on me or having problems drawing out my blood. I think that was probably playing a bit of a role as well.

And from a writing process point of view, getting the right name for a character is really not one of my strengths as a writer, so if I have a good reason to skip this part, I do.

The killer refuses to believe her victim’s answers regarding the nature of the afterlife. What makes her so skeptical/reluctant?

And I think it’s possible that he lied to her in the past—or that she thinks he did. And he just can’t remember it.

What made you decide to tell the story from his point of view instead of hers?

I don’t know what doctors are thinking when they order more tests. I do know what I’m thinking. “Why? Why? WHY?” Which led to this.

While you highlighted that they were never lovers, as far as the narrator believes, you don’t further define their relationship. Why not?

Two reasons: First, I was more interested in what was happening just then—after all, whatever did happen in their past is, I think, less interesting than what she is trying to do now.

Second, all of this has really done a number on the narrator’s mind. Many of these deaths are painful; all of them are disorientating. So even if he could remember their original relationship, I’m not sure we could trust his version of it. So she’s the only person who could define their relationship—and she’s not interested in their relationship. She’s interested—I’d say obsessed with—what happens afterward.

Which horror author(s) would you say inspired you the most? How have they influenced your work?

You know, I can’t really say I’ve ever been inspired by any particular horror author. I have been a bit more inspired by some horror movies, especially those that focus on psychological horror instead of blood and gore. I was mesmerized by Pan’s Labyrinth, for instance, and I thought both the Japanese and American versions of The Ring were brilliantly done even if it meant I had to side-eye videos and DVDs for a while.

But the inspiration from those films tends to show up in my other work—the dark fantasy, retold fairy tales, and science fiction. Horror is different. When I write horror, like this piece, and I don’t do this often, it is almost invariably in response to some mundane horror, some minor hell that I feel I can’t get out of. It’s the mundane horrors of real life that brings forth the monsters.

I have a few more new stories and poems coming out this year from Daily Science Fiction, the Upgraded anthology edited by Neil Clarke, Goblin Fruit, Papaveria Press, and a few other places I can’t talk about just yet. And one of my short stories, “Twittering the Stars,” is about to be reprinted by Upper Rubber Boot Press. I’m very pleased, since that story—one written entirely in tweets, that can be read either backwards or forwards—has been a bit difficult to track down in the last couple of years. There’s a more or less regularly upgraded list of my publications over at my blog, marikness.wordpress.com.

Regarding what I’m working on now—well, I’ve been using this interview to procrastinate on a story. Bad writer! Bad writer! I do have a few more stories to finish up beyond that one, and then it’s back to working on a couple of novels that keep stubbornly refusing to write themselves. Maybe I should write a story about that. 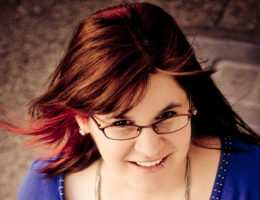