Was there forethought when you chose two children, boys in particular, to be the main characters of this story? Or did you choose the setting first? Explain.

Actually, the setting and characters came simultaneously to me for this story. As I was planning lessons for a creative writing class that I’m teaching, I wanted to create a writing prompt using an image as a starting point for writing sensory detail. I came across an image that spoke to me so much, I not only used it for the writing prompt, but also wrote this story based on the image. It shows two boys fishing, one of whom is pulling up an octopus on his line. I was immediately struck by the idea of two boys hooking what they think is a tentacled river beast. The image provided such a strong starting point that the story all but wrote itself from there! The writing prompt also got some excellent responses from my students.

Buck is an abused child, which makes him instantly sympathetic. The fact of his abuse is recognized, but in a way that is almost detached or offhand, until we learn about Buck’s “bad thing.” Then we are left with conflicting emotions regarding the wrongness of the “bad thing” vs the thought that perhaps this is justice? Talk about your thought process with this character related to the ultimate ending of this story and his previous history of abuse.

As soon as I started, I knew that we would have one boy who is a bit more sheltered and nervous, and one whose father is an abusive drunk. What I really wanted to see was their dynamic, how these two characters would interact with the looming threat of what might lie under the water, and how their reactions tell us more about them as people. When I realized what was really under the water, I knew at once that I didn’t want to actually show what Buck had done, because it leaves that moral question up to the reader’s interpretation. We’re also centered around Milo throughout, so the belief in the Backwater Beast and the more fantastical interpretation of what might be in the river reflects his perspective, as well as helping us (hopefully) feel the impact of his realization more strongly. For that reason, we really had to be at a bit of a remove from Buck himself. But I definitely feel that conflict as well, even if I sympathize more with Buck and the idea that it was justice.

During the summer, your book Dark Carnival was published. I’ve read the synopsis and whoa . . . it looks like a dark and dastardly tale. Tell us about the story and what’s next for you.

Thank you! I’m grateful to Independent Legions for publishing it and to the editor, Michael Bailey, for sharpening the prose. The story is about a college student who returns to his rural hometown after his father’s death, only to get drawn into his father’s obsessive search for the mysterious carnival that kidnapped his mother years ago. As he navigates the cosmic darkness at the heart of the mystery, he reunites with old friends, a ruthless sheriff, and a strange girl who might be the key to the carnival itself.

Next up for me will be the publication in Fall 2020 of my forthcoming novel, It Will Just Be Us (as Jo Kaplan), by Crooked Lane Books. I’m thrilled to be working with them on this one. It Will Just Be Us is a modern gothic tale about two sisters and a haunted house that never sleeps (perfect for fans of Shirley Jackson’s We Have Always Lived in the Castle).

I am an oncology nurse and I find that this leaks into my writing, even when I don’t necessarily want it to. A character will have cancer, or will be a nurse, or some other dynamic relating to disease and how it can change one’s life. According to your bio, you teach at a community college. Do aspects of your day job leak into your writing, too?

Funny that you mention this—because the answer is yes! The protagonist of It Will Just Be Us, Sam Wakefield, is a young female adjunct professor, and many of her anxieties and insecurities are ones that I felt when I first started teaching at twenty-five. I intentionally wanted to explore this character because it’s not what you see in the stereotypical professor so often used in film and fiction: the studiously handsome, silver-haired, well-paid male professor wearing a tweed jacket and spending all day in uninterrupted research in an old-fashioned and lushly appointed office. Hah! It’s such an outdated stereotype. Professors are real people, too! Some of us are older, some quite young; some are very serious, others quite goofy; some dress up, others dress down; we all have our own anxieties and insecurities. And most professors these days are adjuncts (i.e. underpaid contingent faculty with no offices, benefits, or job security). So I wanted to show a different sort of academic in Sam Wakefield, and I guess the bonus is not having to do any research to make it believable, since my entire day job serves as research for it!

Thanks so much for answering these questions. Please tell our readers where they can find you online and where they can catch up to your deliciously dark writing.

Thank you for the wonderful questions! Find me at joannaparypinski.com, follow me on Facebook, or find me on Twitter and Instagram, both at: @joannapary. Catch up with my writing here on Nightmare or in Black Static (issue #69 includes my story “Beach People,” which was listed on Tor.com’s “Must-Read Speculative Short Fiction” from June 2019). 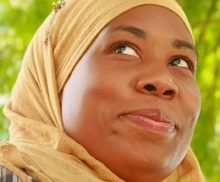 Khaalidah Muhammad-Ali is a writer, editor and narrator. Her publications include Apex Magazine, Strange Horizons, Fiyah Magazine and others. Her fiction has been featured in The Best Science Fiction and Fantasy of the Year: Volume 12 edited by Jonathan Strahan and The Best Science Fiction of the Year: Volume Three edited by Neil Clarke. Khaalidah is a proud World Fantasy Award nominee for her work at PodCastle.org, where she was co-editor from 2017-2019. You can hear her narrations at any of the four Escape Artists podcasts, Far Fetched Fables, and Strange Horizons. Of her alter ego, K from the planet Vega, it is rumored that she owns a time machine and knows the secret to immortality. She can be found online at khaalidah.com.