We have original fiction from Giovanni De Feo (“Kiss of the Mouthless Girl”) and Charles Payseur (“The Sound Of”), along with reprints by Priya Sharma (“Pearls”) and Helen Marshall (“The Vault of Heaven”). We also have David Bowles discussing dark Latino folklore in the latest installment of our column on horror, “The H Word.” As usual, you can expect some great author spotlights with our authors. But the big news this month is the exciting premier of our new book review column by Terence Taylor, called “Read This!” 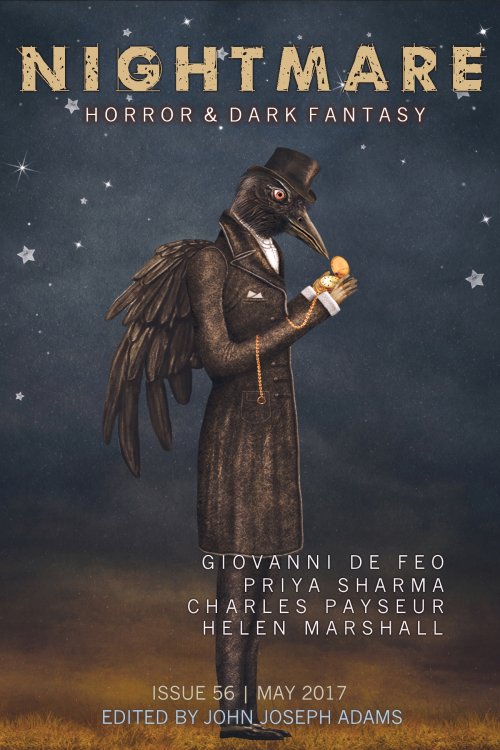 Be sure to check out the Editorial for all our news and announcements, as well as a run-down of this month’s content.

This story is an almost literal transcription from a nightmare I had while I was at Clarion, in San Diego. I was coping with a recent breakup, and probably that’s where the whole nightmarish female figure stems from. I find the habit of writing down dreams fascinating, as it forces me to create a narrative where there isn’t one. That’s where my screenwriting training probably kicked in, creating narrative threads and linking the different scenes. I’m not aware of any “cinematic quality” of my writing, but I’ve been told this before, so it must be true.

I sat in the park watching a couple who were, like all lovers, only intent on one another. The girl was a beauty ripe for harvest, her hair a golden sheaf. The boy’s desire was visible in the way he kissed her. I felt a pang. I, too, had been lovely once and loved. My hair made jealous noises in sympathy. A man walked by, and I could hear the furious beat that was piped straight into his ears. His curious gaze slid over my sunglasses and cap, then the sketches on my pad. I loved the park. It had appeared in my work many times.

I think (I hope) that the story is about increments. It’s about exhaustion. Here again the story leaps from this fear and shame and disillusionment I felt and still feel. It’s not a very hopeful story. It offers no alternatives or solutions. But it does explore this idea of resistance and acceptance. Diego has every reason to resist. The setting of the story is actively toxic for him, erasing his bisexuality, erasing his past, erasing so much about him. He has no job, and the system is designed to ensure that in order to live he has to lie constantly, which only feeds into his own doubts and insecurities, his own erasure.

The Vault of Heaven

It will be of little surprise to those who know me well that, as a boy, I was possessed by frequent night terrors. I do not like to speak of them now. It embarrasses me—even as it embarrassed my father once. I was a child: I saw as a child and I spoke as a child but my fears were not those of a child. There was a small window set into the north wall of my bedroom, and from this I would gaze out upon the constellations of lights that burst through the gloom: stories my father told me of heroes and monsters, there a dragon, there Hercules. To him these were figments, glimmering signs of a bygone age, but to me? I saw something more.

Terence Taylor brings Nightmare the first installment of his new review column: “Read This!” This month, he reviews Powers of Darkness: The Lost Version of Dracula, an unusual Icelandic translation of Bram Stoker’s classic, and Paul La Farge’s The Night Ocean.