We have original fiction from Łukasz Orbitowski (“Don’t Go”) and H.L. Nelson (“Dirtman”), along with reprints Michael Cisco (“Machines of Concrete Light and Dark ”) and the aforementioned Seanan McGuire story, “Spores.” We also have the latest installment of our column on horror, “The H Word,” plus author spotlights with our authors, a showcase on our cover artist, and a feature interview with Mark Morris. 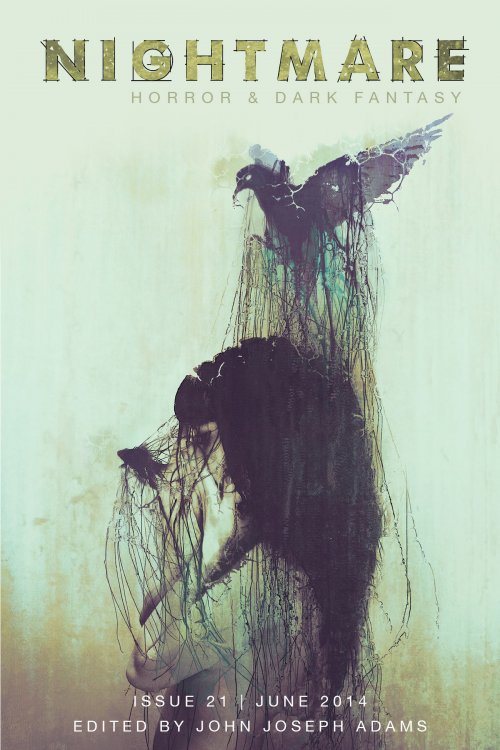 We have original fiction from Łukasz Orbitowski (“Don’t Go”) and H.L. Nelson (“Dirtman”), along with reprints Michael Cisco (“Machines of Concrete Light and Dark ”) and the aforementioned Seanan McGuire story, “Spores.” We also have the latest installment of our column on horror, “The H Word,” plus author spotlights with our authors, a showcase on our cover artist, and a feature interview with Mark Morris.

Something in the lab smelled like nectarine jam. I looked up from the industrial autoclave, frowning as I sniffed the air. Unusual smells aren’t a good thing when you work in a high-security bio lab. No matter how pleasant the odor may seem, it indicates a deviance from the norm, and deviance is what gets people killed.

Q: You’ve written about viruses, parasites, and fungi—what is it about these pathogens that fascinates you? A:
Everything! I figure I have two choices, with as much as I know: I can either be extremely fascinated and excited and enthralled, or I can be terrified and never leave my home again.

—Don’t go—she said. Leaning on the door frame as if she was about to fall down. I understood that she was worrying about me. She could’ve stopped me, but she didn’t. Only the words: “Don’t go.” A lump in her throat, no strength to say more than this.

In my early stories, I would try to shock my readers with ghosts and a lot of blood. Now I know that sometimes less means more. We have movies like the Saw series, and games like DEAD SPACE, and they will be more effective, much scarier in a traditional way, than books can be. So, I’m looking for something different.

There is safety in numbers, goes the popular adage. While that may be true when considering the likelihood of a car plowing into a group of cyclists, when it comes to life in the big city, living among the masses isn’t going to save you from the Bogeyman. In fact, the masses might have you running for your life.

Machines of Concrete Light and Dark

Things always seem closer together on a bad morning. I slept poorly last night, and now the relentless brilliance of the day makes my eyes smart and my face ache with squinting. Just within the station doors I stop to adjust my bag where it is cutting into my shoulder, and I notice at my feet a small piece of black plastic shaped like a capital L, and one end is frayed into a tuft of fibers.

My favorite Lovecraft stories change with time. I wouldn’t say any one feature attracts me significantly more than any other. This lurking idea was simply a propitious jumping off point for the story.

Leslie Ann O’Dell is a self-taught artist based in Colorado. Using photography and digital manipulation, she plays on themes of light and dark, nature, psyche, and self to create richly enigmatic and haunting portraits. Find her work at leslieannodell.com.

When I see the scorpion curled under a caliche rock I picked up, my first want is to smash it like Daddy would. Daddy’s always killing things—hairy tarantulas in the hall, fat diamondbacks in the field, and my hound pups when they get parvo. Our few patches of grass have the sick, but Daddy won’t treat it. He says it costs too much.

This was the toughest story I’ve ever written, hands down, and it’s because I do feel quite close to my main character. This story started off as an 800-word piece, because I couldn’t write more than that for months. There are specific scenes that come directly from my own childhood experiences, and perhaps a few cathartic tears were shed during the second draft filling-out process.

Mark Morris has been a major figure on the British horror scene since 1989, when Toady, the first of his sixteen novels, was published to critical acclaim and solid sales (the 1990 paperback release debuted at number seven on the bestseller list). When his fourth novel, The Secret of Anatomy, was published by HarperCollins in 1995, he was being called “the new Clive Barker,” but his next few novels were victims of a serious downturn in horror.