We have original fiction from Jessica Amanda Salmonson (“The Garbage Doll”) and Andrew Fox (“Youth Will be Served”), along with reprints by Jeffrey Ford (“Word Doll”) and Lynda E. Rucker (“The Dying Season”). We also have the latest installment of our column on horror, “The H Word,” plus author spotlights with our authors and a feature interview with J. Lincoln Fenn. 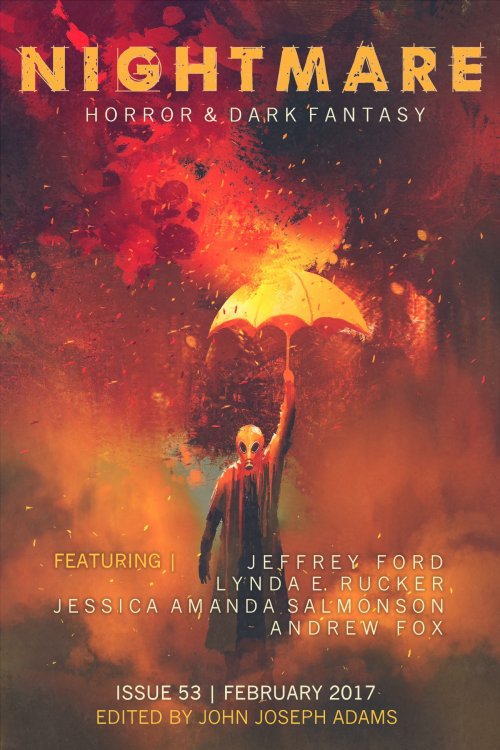 Be sure to check out the Editorial for a rundown of this month’s content and all our news.

At first it was a fireman. A fireman was leaning over me. “Do you know your name?” Yes of course I know my name, what kind of silly question is that? But I couldn’t speak. I was in a vehicle, lying on my back. Oh, it’s an ambulance. But then I’m not there at all; I’m in a hospital. “Didn’t you used to be a writer?” asks the nurse, leaning over me, or is she a party clown? She’s wearing bright lipstick and her face is too close to mine and she smells of cigarillos. “Weren’t you a writer?” and I replied, “I used to be a writer.” She said, “Then what are you now? What do you do now?”

Anything that resembles us in any way is going to be dangerous and frightening.

At dawn, the leisure resort was still and quiet, prefab cabins and trailers jumbled together and sleeping soundly, and along the harbour all was peaceful. The peace would not last; the unseasonably warm and sunny weather so late in the year as October, and particularly for an English seaside village, meant that soon it would be jammed with dog-walkers and families and couples strolling up and down the concrete seafront, taking in the last of the light and the warmth before winter closed in altogether. It was, on the face of it, an unbeautiful shoreline: massive concrete steps leading in low tide to piles of dead black seaweed washed up between large wooden groynes.

I am fascinated by human relationships, and by romantic and sexual relationships in particular, and the subtle psychological cruelties and manipulations that people can visit upon one another within that framework. In this story, there’s a real power imbalance between Sylvia and John, and that power imbalance is a critical part of having Sylvia start off in the story on the back foot and struggle throughout to assert herself. I think one of the hallmarks of an abusive relationship is that it causes a person to doubt themselves and their own version of reality.

The H Word: The Weird at the World’s End

Could the Weird, by teaching us how to live with a dysfunctional reality, shake us out of complacency and into action? Could the Weird provide lessons on how to live under the shadow of incessant dread? For over a decade, scientists, philosophers, and poets have told us we stand in the Anthropocene, a time when environmental damage has progressed so far that the chain-reaction to the end of the human race and the destruction of the planetary biosphere has passed the point of no return. In sum, we stand on the precipice of how to live after the end of the world.

Youth Will be Served

There’s nothing more awful than watching a child you love dying. Janey tosses a handful of sand onto my bare belly. She must’ve noticed me brooding. “Auntie, don’t be glum! It’s my birthday. I’m thirteen. So be happy, or else I’ll bury you up to your neck!” She smiles her big, toothless smile. Myra’s paid good money to have sets of dentures made for her, but Janey complains they hurt her gums. Getting her to wear them regularly is as hard as getting other teenagers to clean their rooms. Her eyes are still the same sparkling gray-blue color they were when she was born. But they’ve developed the beginnings of cataracts, and they’re surrounded by wrinkles now.

I grew up in North Miami Beach and spent a lot of time in South Beach, back when it was known as “G-d’s waiting room” and no one there was under the age of seventy. My father taught me to appreciate the architecture of the old Art Deco hotels, the places he stayed in when he’d first visited Miami Beach in the 1940s and 1950s, when he worked as a driver for a wealthy, older Cleveland, Ohio couple who used to winter there. As a kid, I used to bike the twenty or so miles from my house to South Beach and stare at the drained swimming pools of the mothballed old hotels.

Every morning I take the back way to town, a fifteen mile drive on narrow two lane roads that cut through oceans of corn. The cracked and patched asphalt is lined on either side by telephone poles shrinking into the distance. Sometimes I pass a hawk perched on a fence post. Every few miles there’s a farm house, mostly old, like ours. In the winter, the wind is fierce, whipping across the barren fields, and I have to work to keep the car in its lane, but in summer, after I get my cigarettes in town and stop at the diner for a cup of coffee and a glance at the newspaper, I drive home and go out back under the apple trees, sit at a little table, and write stories.

One of my conscious intentions, and there were few, was to concoct a legend. Quite a few people have asked me where I heard about the Word Dolls. Sometimes I tell them I made it all up, and sometimes I make something up, and tell them I got it from a local farmer or a town historian or something.

In 2013, a previously unknown writer named J. Lincoln Fenn won Amazon’s Breakthrough Novel contest in the Science Fiction/Fantasy/Horror novel with Poe, a hybrid of horror, mystery, and young adult that involves spiritualism, haunted houses, and the Russian mystic Rasputin. The novel garnered almost universal praise, and marked Fenn as one of the horror genre’s most promising new voices. In 2016, Fenn published her second novel, Dead Souls, with Simon & Schuster’s Gallery Books imprint; as with Poe, Dead Souls mixes genres in a story about a young woman, Fiona Dunn, who makes a deal with “Scratch”.