We have original fiction from Dale Bailey (“I Was a Teenage Werewolf”) and Livia Llewellyn (“The Low, Dark Edge of Life”), along with reprints by Brian Evenson (“The Blood Drip”) and Priya Sridhar (“The Opera Singer”). In our “The H Word” column, Alex Hofelich of Pseudopod talks about what makes the audio experience of horror so great. We’ve also got author spotlight mini-interviews with our authors, a showcase on our cover artist, and a panel discussion of the show Penny Dreadful. 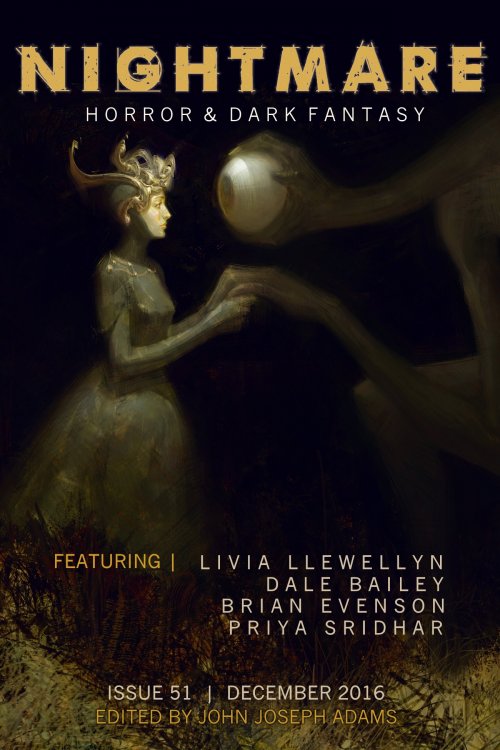 Be sure to check out the Editorial for a rundown of this month’s terrifying content and to get all our news and updates.

I Was a Teenage Werewolf

Before Miss Ferguson found Maude Lewis’ body in the school gym, none of us believed in the teenage werewolf. There had been rumors, of course. There always are. But many of us viewed Miss Ferguson’s discovery as confirmation of our worst fears. Not everyone shared our certainty. There had been only a fingernail paring of moon that late February night, and a small but vocal minority of us argued that this precluded the possibility that Maude’s killer had been a lycanthrope.

I set myself a challenge a few years ago to write a series of stories using the titles of cheesy SF/horror movies from the 1950s as a source of inspiration. The idea was to honor the pulpy nature of the material while treating it with subtlety and emotional nuance. So far, three of them have seen print—The Creature from the Black Lagoon (retitled “The Creature Recants”), “I Married a Monster from Outer Space,” and “Teenagers from Outer Space,” with another one forthcoming (“Invasion of the Saucer-Men”).

They had stumbled upon a town and tried to approach it, but had been driven off with stones. Or Karsten had. Nils had stayed there, at the base of the wall, pleading, and had been struck, and then struck again. When Karsten had shouted to him to come away, Nils had turned and then been struck yet again, in the head this time, and had fallen. There was blood leaking out of his head when he fell, and in the brief flash he caught of him on the way down, Karsten thought he had seen bone.

The horror that has the strongest impact on me has always been horror in which suspense is primary and gets coupled with a kind of dread, so that you feel sure that something is wrong, but that you’re only touching the tip of the iceberg. A friend of mine and I were talking about how disappointing most horror movies are when the monster you’ve been seeing bits and pieces of is finally revealed: it’s almost always a disappointment. It’s much more frightening when you only partly know what’s there.

Audio horror adds another layer. When watching or reading horror, we have the opportunity to look away or skim when things get a little too intense. Audio forces you take a much more active role in escaping. We’re not allowed to cover our eyes when Button Boy is fastening those smiley faces to his victims in “Best New Horror” by Joe Hill. When our hapless editor is crashing through the woods at the end, our hearts are pounding with the same mix of exhilaration and fear. Audio horror stalks you relentlessly.

The Low, Dark Edge of Life

Translator’s note: these are the only extant, unburned, and legible (for the most part) pages retrieved from what was apparently the diary of one Lilianett van Hamal, an American girl who apparently lodged at the Grand Béguinage shortly before the Great Summoning of 1878 that left much of the city of Leuven in ruins. No other items from before that event have been recovered from what is now the Leuven Exclusion Zone, which as of this date remains permanently off-limits to the outside world.

I have a fascination with insect hive populations and mega-colonies and their various forms of communication, and I’ve always wondered if at some point, insects will figure out a way to manipulate humans into becoming walking bone radios or wetware smart phones or whatever it is they need us to be. And I think of insects as wholly alien and therefore probably excellent at transmitting messages between dimensions, acting as voice carriers or even as video cameras for beings in other planes of existence.

James T. Robb is an illustrator based out of the Los Angeles. area. His work typically revolves around the illustration and gaming industries, but he is constantly seeking to expand into new, interesting endeavors. His father was a businessman in the import and export industry, and as a result James moved around a lot when he was young. A good portion of his childhood was spent in Latin America and all over the US. He grew up with access to a wide array of cultures and beautiful sights, but the constant change also carried an element of isolation.

The cold had blown in early on Sunday morning, too early for the fall. People shivered in their purple-and-black sweatshirts; so did Circe. She had taken to pushing her wheelchair, as a form of unofficial rehabilitation. She had managed to get it to the music school’s practice buildings this time. “You can’t practice here,” the security guard said, after Circe’s wheelchair had gotten stuck in the door. “You’re not a student.” Circe first stood up and got the chair out of the door jam. She then placed her fists on her hips.

I was in choir from elementary school up into my first year of college. I was a first soprano through and through. Music is one of my passions; I enjoy listening to orchestra, Broadway, video game and animation music. If you want to win me over, tell me what you think of Hamilton or Undertale. In addition, I trained in the basics of violin playing.