by Laur A. Freymiller

“The Mothers” came mostly from “hidden mother photography” that was popular in the Victorian era—these are essentially photos of children with their mothers “hidden” in the background. The result is utterly unsettling. I’ve been interested in the blurring of binaries for a while, and the binary of mother/not mother felt ripe for exploration.

There are mothers all around us. The mothers we see, of course: pushing strollers, wiping snotty faces with saliva-moistened tissues, eternally tethered by hands to their bawling offspring. Sad mothers and gay mothers. Sprightly mothers and slow. Some mothers who don’t realize they are mothers at all.

Theodora met the Mothers after she lost the baby. Stan was driving them home with Theodora curled up in the passenger seat, hugging knees to chest. A few blocks from the house, there was a flutter in the rearview mirror, but when Theodora shifted her eyes to catch it, it, like so many other things, was gone.

At home, Stan made her a bed on the family room couch. He poured blue Gatorade into a mug and added a crazy straw, as if Theodora was eight and home with a cold.

“Thanks,” Theodora said, and Stan kissed her on the forehead. He went upstairs to make dinner.

It was late afternoon falling toward evening, and through the slanting light everything looked hollow. The walls made of cardboard, the TV, the lamp, the end table all paper cut-outs. Theodora reached over and shoved the lamp off the table.

When many hands reached out and caught it before it hit the ground, Theodora saw that the Mothers were all around her.

Stan went back to work, leaving Theodora home but not alone. She watched the Mothers slithering, sliding underneath the floorboards and behind paintings on the wall. It made her laugh to watch them, and they delighted in her laughter.

They creeped into the baby’s room, and Theodora followed, laughing still. One of the Mothers wrapped herself in a yellow baby blanket and made whimpering, crying noises.

“How are you doing?” Stan asked on an evening.

“Better,” Theodora said. Her lips burst about the “b.” It was a mystery how she managed to form words. Her teeth clamped together and parted, and the flesh of her tongue flexed, folding against the roof of her mouth.

“Do you think,” Stan said. “Do you think you might go back to work soon?” Theodora, who was exploring the backs of her teeth with her tongue, said nothing. “It might be good for you,” he said. “You know, get you out of the house.”

“Maybe,” Theodora said, “but I’m having such a nice time here.”

A few days later, the Mothers taught Theodora how to crawl along with them. The trick was to let yourself go, to sink behind and beneath, to slip through the cracks to a place where space and time could not catch you.

And this, Theodora realized, must be how the baby had done it.

Theodora giggled from behind the banister, and Stan turned at the noise. By then she was gone, up, up, up to the second-floor bathroom, and down, down, down the claw-footed bathtub drain.

The Mothers whispered to her, cheering her on, cackling and rattling their claws. Stan walked down the hall to the bathroom, and now Theodora was behind him. She walked close, her breath moving the back of his shirt, her fingertips aching to touch. She saw the nubs of his spine, the flesh and the skin, and saw how easy it was for all of it to tumble over the edge.

Stan turned around and found her waiting.

The house was silent, and Theodora was resting in the ceiling. With her eyes closed she could see no one, and no one could see her. She stretched. She yawned. The Mothers hummed a sleepy tune.

Somewhere a baby was crying. 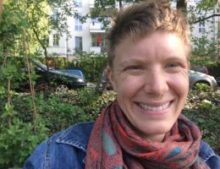 Laur A. Freymiller is a non-binary writer originally from small-town Indiana. Their work is informed by an adoration of the eerie, a fascination with folk and fairy tales, and a penchant for anything weird. Laur received their undergraduate degree in biology from Carleton College and has been published in the New Zealand Journal of Ecology under the name Laura A. Freymiller. Laur has worked as a barista, a house cleaner, a brewpub host, and a dog collar salesperson. They are currently pursuing their MFA in Fiction at the University of Idaho, and their previous short stories have been published by Hobart: Pulp and The Fabulist. Laur lives in Moscow, Idaho with their mustachioed cat Scout.