She is a girl, coming to a house. Not just any house: a large, sprawling mansion, built up from the remains of a ruined abbey, or a shattered castle. One that stands on the edge of a cliff, overlooking the seas, or lost in fog-swept moors, or deep within a rugged forest. A house of secrets, a house of ghosts and haunts.

She is alone, or nearly alone, or thinks she is alone. This is not quite as strange as it might sound. In her world, parents die young. Most of her remaining relatives are indifferent, or poor. She has spent some time in a girl’s school, or an orphanage, where for some reason, she has made very few friends—or at least, not the sort of friends that she can ask to help her against ghosts, or murderers. She knows that sometimes girls are locked away. Sometimes they are tossed out into the streets. The ones locked away are often fed.

She could be a governess of some sort. Or a companion. Perhaps a distant relative. Not one of the servants, of course—these sorts of stories, she knows, never seem to be about them. Which is odd, in itself. She knows full well that maids and cooks can also be haunted by ghosts, can find themselves in love with the troubled owner or the heir. And the maids are more likely to hear gossip, and to be able to explore the house more openly, as part of their cleaning duties. Especially in a house like this, where the rough tongue of the cook gives them plenty of reasons to avoid the kitchen. Yes, she could almost make this work, as a servant. But she needs a position on the boundaries, where she is not quite part of the household, and yet not quite part of the staff, where her position with the man will be as uncertain as those boundaries.

For of course, this house has a man, one of endless fascination and uncertain moods, with a past that no one will talk about—at least, not at first. Indeed, more than one man—at least two, perhaps three. You may well find yourself wishing that she will choose the happier, more stable man, or at least a man less associated with the house. Or a man who tells jokes, though men who tell jokes somehow find themselves avoiding the house, so it is harder to see much of them. Or, when they do not, the joking men visiting houses like these turn out to be murderers, their charm and seeming stability concealing their thirst for blood. It happens, in a house like this. Perhaps she is better off with the moody man trapped by ghosts. Or with one of the women.

Some do not want to meet her.

But she will meet them, one by one. She has secrets to uncover, ghosts to quiet, a house to transform. She cannot—will not—become one of the women locked in the attic, or locked in the crypt. Tempting though that idea is. After all, the hope of finding a room of her own—a room where she could lock the door behind her—was half the point of coming to this house. Again and again, she will find herself fumbling with the keys in her pocket, thinking of locking the door behind her, of breathing air that she can call her own, and never unlocking that door again.

She has a house to explore, people to save (that murderer again, not to mention the impatient ghosts), a decision about a man (or, the more she explores the house, and considers the people inside, a woman) to make. She needs to run her hands along its walls and feel its stones, learn which parts are the ruins, and which parts the new stones. She needs to coax out every secret, every ghost, every drop of blood.

None of the residents, alive or dead, will help her, of course. Or even can help her, beyond dropping mysterious hints over tea. A tea, she notices, with an odd taste—though no one will want to mention this to the cook, given the difficulty they all had getting any cook to come here at all. Some, certainly, will tell ghost stories, or gossip about others in the house, or mention the various women the brooding man has known. (He has known many. That, the maids will claim, is why he broods—though the opposite, that he has known many because he broods, is equally possible.) The children, adorable though they might be, are too troubled, too fond of weapons. The villagers will tell her of curses, and ask searching questions that she will have trouble answering. The women hidden in the crypts and the attics will not say anything at all. At least, nothing of importance. Nothing recognizable. Not while they remain inside their crypts and attics.

No, she will not take any of them on her expeditions. She does not want to be held back by their fears, their eccentricities—all caused, they assure her, by the house. Or by their blood. It happens, in old families, and in houses like this.

And she certainly cannot explore with any of the men. Not the cheerful ones, who might be murderers, and certainly not the brooding man, who needs to keep his secrets hidden, and will steer her away from where she must go. Besides, she is spending too much time with the brooding man as it is. The butler is not the sort willing to explore beyond the wine cellars. The other manservants have far too much work to do—the cook keeps increasing the demands on them.

Even more, now that she has arrived, apparently convincing the residents that they should, perhaps, consider overlooking the curse on the house and hold a party or two. Perhaps. If the ghosts don’t return. (A pointless if: you can’t return if you’ve never left, and the ghosts never left.) What are the chances, after all, that a dead body will be found at the party, or just afterwards? Surely that sort of thing only happens in books. Yes, a party might well be advisable, of the sort that the house used to have, back before . . . before . . . before the whenever happened, which is so long ago that even the women locked away in the crypts cannot remember it, or when.

She can feel the house trembling beneath her fingertips at the thought.

Soon, she whispers to the house. Soon.

She does not need, of course, to be told to be careful at this party. To be careful of the man of uncertain moods, of the laughing man who has garnered an invitation (is he carrying a dagger? Poison?) Of the nervous looks of the servants, who fear she will ask disconcerting questions about what, exactly, can or should be done about the howls of the ghosts at the party. The moody man suggests hiring more musicians to drown out the sound. Others take it as a sign that perhaps—perhaps—he is throwing off the long shadow of the house at last. Perhaps.

She cannot spend too much time pondering that—or even the increasing amount of time she is spending with the brooding man. (Necessary, she tells herself, as well as increasingly enjoyable.) The party is a distraction, she reminds herself. A distraction. Even if a few of the guests drop some tempting bits of gossip. Even if the dead body (they all should have known this was coming; indeed, the shock on most people’s faces is not entirely convincing) is topped with three small silver bells, just like the bells left in her room every Thursday, the bells that no one, and in particular the women locked in the crypts, wish to discuss. Perhaps especially because of the bells.

The house is anxious, after all. She can feel it. It has been waiting for someone like her for a long time, longer than most of the residents know. It wants its secrets released, its concealed bodies removed to other places.

It wants to live.

She needs to use the bells to uncover its secrets, to find its ghosts. To show that yes, one of the cheerful men is a murderer—though not of anyone in this house. To explain the whispers of the ghosts. To let the children know that monsters—true monsters—are not creatures only of their imaginations, or even of this house. To reveal that the women in the attics and the crypts are not mad, only women who have known too many monsters. To prove that just possibly, everyone—particularly that corpse still resting in the garden, covered in silver bells—should have been paying considerably more attention to the cook, to show that this is a story, after all, that did involve the servants.

When—not if, she will not think in ifs—this is done, she can let herself change. Let herself grow. Let her fingers sink directly into those stones, into those walls. Let her feet send tendrils down through the floors, down to the crypts below (quite startling the occupants, dead and living alike, giving them a chance to flee). Let parts of the house in turn sink deep into her skin.

And when she leaves, as she inevitably will—the city where she grew up still calls to her, after all, and always will—she will take the house and its residents with her. All of the residents, that is, who did not seize the earlier chance to flee: sane, mad, living, dead. All, by then, part of her heart, her bones, her skin, all ready for her to unleash on the world. She will be haunted, yes, and she will never look at silver bells in quite the same way again. But she will have a house set deep within her skin, a strong guard against loneliness—and monsters. And the wisdom to always pay attention to the cook. 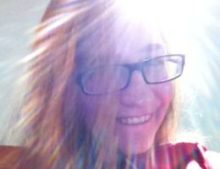