Yellowed bones tangle with jade necklaces and gold bracelets in the depths of the cenote, where blind fish and crayfish swim. She stands near the edge of the waterhole, observing its beautiful depths, her hands clutching her long skirt.

At her feet there is a burlap sack. A pig squirms and squeals inside. She ignores its protests.

She is a novice at a convent near a small town baked by the harsh sun, a town south of Mérida; a town where all buildings are painted yellow and white. The convent was built on top a pyramid, an attempt to vanquish the old traditions, but many Mayan ruins remain around the peninsula. And so do the cenotes.

She spends her days in song and prayer, a humdrum existence driven by habit and monotony. Sewing, baking, sweeping and scrubbing the floors. Simple meals accompanied by coarse bread, lessons and readings of saints and martyrs, a few phrases in Latin, these are all the things she knows. Before, when she lived in her parents’ house, it was much of the same, domesticity and a dreary alternation of pointless tasks. Mother taught her all her duties, but without joy. Seventh child, a daughter, a useless mouth to feed. The boys, at least, could work, and her sister was beautiful enough to wed off. But she, stunted thing, with the pockmarks and the bulging eyes. Who’d want her?

She never complained, not knowing a life which was any better. She accepted her lot not with stoicism, but with a soft indifference. Had her father willed it, managed it, she might have married, had children, died a grandmother. But would that have been any more or any less than her current life at the convent, than the quiet, cloistered life of the nun? She does not know and does not ask.

And yet something scratches inside her head, a tiny little scratch, a prickle of a question which drives her every other day to the cenote.

The convent is isolated, and the nuns reckon the surrounding jungle possesses dangerous animals and equally treacherous terrain. The convent has an interior patio, like all pleasant abodes in the peninsula. The patio’s floor is decorated with blue and white tiles, and upon those tiles sit potted plants, a fountain in the middle. In this docile environment the nuns are expected to spend their days, nature subdued and placed in glazed pots, and the women placed as stiff and still as the plants, sitting on stone benches.

She finds no joy in the patio nor its greenery. The tips of the stunted palm trees are going yellow, they rot in their pots. So she heads outside the heavy wooden doors of the convent, and although the women shake their heads, they do nothing to bar her from walking outside.

That is how she found it, found it during one of her walks, found it as if a path had been etched on a piece of paper to map her steps.

It seemed to her at first a waterhole just like any of the other ones in the vicinity of the convent, the jungle offering many such areas of respite.

She had spent longs days with her head bowed over the Bible, her lips mouthing prayers, fingers sliding across the cool rosary beads. These actions were mechanical, required of her, yet they brought no great joy or emotion. Covertly she wondered if God really looked down at her from heaven and saw everything she did, cataloguing her sins as the Mother Superior had warned her. Their books told of visions and angels and religious ecstasy which eluded her even when she fervently fasted and prayed.

The day she first peered into the cenote, this changed. She had read an account of Saint Teresa, her ecstasy. How she felt a spear of gold and fire go through her heart, filling her with the love of God. It was a similar experience. She felt pierced, rent, like a ship hit by a storm. There was pain and fire and gold and the taste of a dark sweetness in her mouth, which she later discovered was blood: she had bit her tongue. She stood by the cenote, her lips painted crimson like a common whore in the alleys of Mérida—fallen women, her mother made her cross the street when they encountered one, don’t look at her child—and knew herself in the presence of divinity.

Afterwards, she screamed, scaring off the birds which sang in the trees, making the monkeys nearby scream back, a cry which resembled the bark of dogs. Dogs and monkeys and birds and the crimson mark.

She ran away, of course. She fell and scraped her palms, the jungle snagged her skirt and her hair and she returned to the safety of the convent in an agitated, wide-eyed state. She bowed her head and prayed, baked bread and swept floors just as she’d done before.

Yet she could not forget the murmur of the wind through the trees, the greenish-blue waters of the cenote, the redness of the blood against her fingers as she tried to wipe them clean.

She found out from one of the wrinkled nuns who watched over the novices that the cenote she had visited had a name. The Spaniards had called it The Eye, a rough translation of its Mayan name. It had been, at some point, a sacred cenote where weapons, jewelry and people were hurled in honor of the gods.

Deep, deep beneath its still waters the cenote hid ancient bones and ancient treasure and even more ancient power.

She, who had lived her entire life in a drowsy vacuum, suddenly found herself awake. Like the listless plants in the courtyard, she had withered each day, and now it was as if an invisible hand had sprinkled water upon the soil and she revived.

No. It was as if she’d been dead and It had jolted her into life, a baptism of blood to mark her birth, for all births are bloody and etched with pain.

Had he not raised corpses, Christ? It was written there, between the pages of the Bible with gilded edges, which her mother had given her as a parting gift. That Bible and a kiss upon the brow, the only time she recalled her mother lavishing a caress upon her, the unwanted, youngest child. Mother had no interest in this weed, the inopportune daughter.

I am the resurrection, and the life.

But, this, It, was not Christ. She had not found It in the safety of the book. It came from the ground, the land. The pages and the nuns never offered answers.

She returned, and the greeting this time was gentler. She felt It there, in the bottom of the waterhole, but the pain which had accompanied their first meeting was absent. Instead, It merely tugged at her skirts, urging her closer to the edge, mumbling a word she did not know.

First she offered the golden ring on her right hand, the ring her father had given her upon her communion and which shone in the morning sun as she hurled it into the cenote. But It was not pleased, and it took her a few more tries to understand.

Now she understands, now she knows. Restless walks through the jungle and sleepless nights yield answers.

At the convent they keep animals and a small garden to provide for the nuns. They keep pigs and chickens and cows. Catching a piglet is no small feat, but she manages it, and tosses it into a burlap sack and now she brings the sack here.

She peers into the cenote and for a moment she is afraid, she is uncertain, the pig is squealing and complaining and her hands are trembling as she shoves it into the waters.

It falls with a loud plop and then there is silence, there is nothing, there is the pause of a mouth yawning before words are spoken.

She has never been loved. Not by her indifferent father or the chiding mother or the quiet nuns. Yet here is love. She feels this love lift from the water and enter her body, like that fabled arrow Saint Teresa spoke of, an arrow of jade and gold. This time she is not frightened. She accepts this love into her body. It rings a note, like the songs of the nuns as they bounce against the walls of the chapel, and it echoes through her limbs, her arteries, her nerves, settling in her stomach.

She stands near the edge of the waterhole, observing its beautiful depths, her hands clutching her long skirt. She screams her love to It and then shuts her mouth, teeth biting into her lips. The birds go quiet in the jungle, the monkeys are still as stone, the fish in the depths of the cenote stop their tireless swimming. And It laps her toes, kisses her hands, rises gold and jade, it speaks a word and she babbles it back, each syllable crimson with the blood spewing from her mouth. 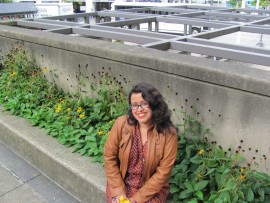 Silvia Moreno-Garcia is the critically-acclaimed author of Signal to Noise—winner of a Copper Cylinder Award, finalist of the British Fantasy, Locus, Sunburst and Aurora awards—and Certain Dark Things (Mexican vampire on the run meets street kid), selected as one of NPR’s best books of 2016. She won a World Fantasy Award for her work as an editor on the anthology She Walks in Shadows. Her next novel is The Beautiful Ones, out October 2017.