The horde is attracted to bright colours, so when you put together your bug-out bag, you pack the drab outfits you’d sworn never to wear again once you’d finally, breathlessly, emerged as your true, radiant self.

You pack a heavy hunting knife, because what you carry looks valuable. You’re glad that your arms are gym-strong and intimidating, because the idea of hurting someone, even in self-defense, makes you want to vomit.

You leave behind your old name. You try not to wonder if you’re the only one left who remembers it. You don’t know how you’d feel if that were true.

You take two photos of yourself, one of a gap-toothed girl on her first day of school, her shoes pink like the inside of a scalp, and a photo of a strong young man shirtless in the sun.

More scars, some of them deep.

You pack a map, but you already know all the good hiding places: the disused stairwells in the school that hid you for years, the storm drain near your apartment that you saw in a documentary about the Cave Clan, the hollow of the swooping gum tree that stands bold and tall in the front yard of your best friend’s house.

You know where to go where nobody will hear you, not Jason Miller from the cricket team, with his sharp laugh and rough knuckles, and not the horde with their clacking teeth and hungry hands.

You leave behind fear. Can’t afford the weight. You’ve had enough of it to last a lifetime, anyway, and you’re only twenty-seven. You’ve been frightened, though, of leaving your apartment, of being a body in a world where bodies are consumed. The horde thump on your walls sometimes, and you imagine them finding weak points, streaming in. They’re as smart as ravens, maybe pigs. You know you’ll feel nothing after a bad bite, but you’re scared of another transformation, this one unwilling.

There are four sets of car keys in the front pocket of your bag. They belonged to exes and old lovers, and in one case, your best friend, Kristy. Odds are, they’re all dead, but you hope that at least one of their cars is still there, free of fleshy detritus and containing enough petrol to make it out.

You hope that Kristy’s car is long gone.

Maybe you’ll find a car that runs, and you’ll be able to drive for a while. Maybe you’ll get as far out as the sun-blasted fields on the outskirts of Melbourne, maybe as far as your parents’ house in the country. Something tells you that they’re still there, still managing and still safe, with their rainwater and their solar cells and their little white dog.

You haven’t spoken to them since the phones went down, but even in the dark you know your way home the same way you somehow always know which way is north. It’s an uncanny, gut-deep pull. You feel it in your bones, as if they were heavy with metal, magnetic.

It has always surprised you that your earth-moving, beer-drinking, football-cheering stepdad loves you completely and utterly for who you are. Your mother, too, but she’s blood. She’ll have a hundred and one natural remedies stashed away. Some of them might work for minor troubles, but you’ve seen with your own eyes that nothing will calm the horde when they smell sweat and blood in the air.

You pack your hormones, of course. You have a couple of pre-loaded syringes, but you can’t remember how long the clinic said they’d last. When they’re gone you’ll have to figure something out. Hope that looters will overlook T when they break into abandoned chemists. Maybe you’ll get lucky on the road.

You don’t pack hope. You can’t quite imagine getting free of all this.

It smells like hot, broken death outside, and the horde never stops moving. They break like waves on park benches, on abandoned cars. They are soundless but for the tramp of their decaying feet. When you’re half asleep they sound like an inland sea, their dry skin whispering like canvas, their loose arms slapping like ropes.

You have protein bars to spare from that online sale, but they won’t last forever, and you need something green to balance them out. Still, they help. The chocolate kind still almost feels like a treat. Your fridge is full of spoiled vegetables. You opened it once to make sure there was nothing useful in there and nearly threw up at the smell. Still, there was half a bottle of vodka in the freezer. You did a couple of quick shots to settle your nerves and thought about the times you danced to the Spice Girls in Kristy’s lounge room.

You still don’t know where she is, but you looked as long as it was safe. Kristy grew up in the country, too. Maybe she made it out.

You can’t take all of your other people with you, your global community. They’re scattered, hopefully safe, hopefully not dead. Last you heard, the horde is confined to Australia, parts of Indonesia. Maybe quarantine caught the spread early enough, and everyone else is okay. You refuse to worry about anyone in particular, because you know that once you’ve started, you won’t stop, and tears won’t help.

You’re used to checking in with them throughout the day, and now that they’re gone, you feel truly alone. Your hand creeps spasmodically to your jeans pocket, muscle-memory yearning to flick open your phone screen, to navigate to a sanctuary. You carry your phone even though it’s a useless brick of plastic and glass.

You add fishhooks to your pack, although you always hated stabbing fish behind the eye when you’d pulled them gasping out of the water. It was years ago now that you’d fished with your dad. Your real dad, the dead one. At least now he won’t chase you around with a severed fish-head, laughing, thumb poked through the teeth. It’d always made you scream, but these days it would take much more than that.

Matches. They wouldn’t let you into the Scouts, so you need them to get a fire started. Maybe your brother still has the flint and steel he always kept in his car for barbecues and hunting trips. Something tells you that he’s with your parents. Your nieces and your sister-in-law have to be safe, they just fucking have to be, because if they’re not okay, your brother won’t be either.

He’d let something happen to them over his dead body.

That’s what you’re afraid of.

You don’t pack your music. You hope that what’s left on your dead phone is enough to keep you going if the power comes back on. Part of you wishes that you could play something to steady yourself, to amp you up for the dash outside to find a car, but you have to convince yourself in silence. It’s hard.

It’s useless to take your heavy laptop or the hard drives. You hide them all in the garden of your tiny flat, buried after wrapping them in garbage bags to keep the dirt and moisture out. Music has saved your life more times than you can count. You hope one day that you’ll be back to dig up your lifelines, the songs that held you safe.

Cash. Just in case it still works. You don’t have much left after your surgery, but thank God that happened before the horde came. It might help to bribe someone, to convince them to let you go. You might be able to trade it for something useful, if someone is that stupid.

A first aid kit. If you’re seriously bitten and your blood mixes with theirs, it’ll all be over, but you might need the supplies for minor scrapes, accidents. You know how to strap a broken arm, how to cool down a black eye. Useful survival skills for anyone, really.

You leave behind your compass. Someone else who doesn’t have your sense of direction might find it, might need it. You hope that it keeps somebody safe.

You hope that there’s somebody else out there to keep safe.

Someone had left a sleeping bag in your room after a music festival, so you strap that to your pack. Maybe you should take your yoga mat, to sleep on, but you figure that it’s too flashy to carry safely (that’ll teach you for picking out a lime-green mat), and it’s so thin that you might as well just sleep on the dirt if you can snatch some rest. Your stepdad is the one with all of the decent camping gear, anyway, and by the time you see him, you probably won’t need it.

The sun is setting, and that slows the horde down, not that you know why. You could bargain with yourself for another night here, maybe three, but the guilt at staying safe when your family might need you is pushing you out the door. With luck, you’ll be home in a few days. You just need to take those first few steps.

You hear the thump and sway of the horde outside, and you make sure your knife is loose in its sheath. You know to drive it up under their chin, because the blade is long enough to reach the brain from there, and there’s less of a chance it’ll stick in bone.

Just a few more things, to give you luck, to keep you safe.

You sort through your nail polish and pick out your favourite. Bright red. You felt a little weird about wearing it after you came out. But you get to decide how you present, what makes you feel like you, and what you love.

The last thing you pack before you venture out into slow-moving danger is the tear-stained letter that you wrote to your grown-up self when you were thirteen, begging yourself to keep going, to make it, to survive. You always knew it would be hard, but you couldn’t have guessed what you’d face. You nearly laugh then, because the horde is almost the least of it.

You tuck a couple of blank sheets of paper and a pen in with the letter, because when you’re home, when you’re safe with your family, you’re going to write another letter right back to yourself.

You’re going to say thank you, and tell the thirteen-year-old version of you that you love them, that you stayed brave, and that you made it. 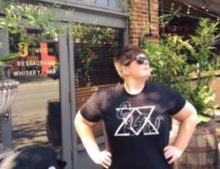 A proud member of Team Arsenic, Emma is a graduate of the 2016 Clarion West Writers Workshop. Emma is a former first reader at Clarkesworld Magazine, where zombies are absolutely, definitely taboo.

Emma currently lives in Melbourne, drinking all of the coffee and eating all of the food, but has a giant crush on Seattle and turns up under the shadow of the mountain at every opportunity. You can find Emma on Twitter at @redscribe.