When the middle section of your story’s a meat grinder, as it always is in horror, chewing up characters and hope and anything good—blood on the wall, teeth on the floor—then staging an ending that saves those characters or suggests the possibility of hope, or just anything even good-adjacent, it’s a real trick, isn’t it? Really though, gore and transgression and mortal stakes aside, happy endings are a trick in whatever genre or mode you’re writing in, just because that’s the job of the second act: to make the third seem impossible. In a romantic comedy, say, there’s a series of low points around the second third of things, where the obstacles have mounted so high that no way can true love win the day. Yet, every romantic comedy, it somehow happens, doesn’t it? It’s called romantic comedy, after all, not romantic tragedy.

Why does that not happen every time with horror as well, then? Why does horror end “down” so much more often than even halfway “happy?”

The easy answer is that the writer is, as the genre contract dictates, satisfying audience expectations: we didn’t pick this novel up or buy this movie ticket or read this story to have a sappy sunrise staged at the end of this long night, we engaged this story because it will confirm what we already know to be true—there’s only night. I don’t buy this, though, not least because it characterizes the horror audience as grim and dour, cynical and full of doom. Actually, I think the horror audience is just as ready for hope as the romantic comedy audience. We’re just as willing to let a happy ending move us, so long as that happy ending is earned.

The other obvious stab at why horror might not have as many happy endings is that, since horror has those bloody, mortal stakes, any ending, even one that successfully overcomes the antagonist, will still be colored by the recent death and destruction and mayhem. Sure, the vampire is dead now, but is this really a happy ending if that vampire killed the survivor’s family, friends, and pet, and, in doing so, destabilized their understanding of how the world works? To say nothing of the trauma and guilt this survivor now has to deal with, and the debilitating fear this brush with the undead has instilled, not to mention this new burden of hatred directed at all vampires.

I submit that this answer is only a matter of degree. No, no one died violently in the romantic comedy on the way to that ending, but the protagonist, if the story’s any good, has been put through a very similar meat grinder: they’ve had to make hard decisions, have had to reveal truths they’d have rather kept hidden, they’ve had to endure the shame of their various charades being outed, they’ve had to face their own shallowness, and they’ve dipped down deep into despair. None of this easy—all of this leaves scars, just as horror does.

Granted, what you “win” in a romantic comedy is love and happiness, whereas what you win in horror is sanity and survival, but, taking into account the limited options horror leaves you with, sanity and survival feels an awful lot like happiness. What I suspect is going on here, actually—why we can’t map directly across from other genres to horror—it’s that horror endings operate on a completely different dynamic, which, if this needs its very own TV Trope definition, let’s call it “My Genre is Special.”

Except, I submit, horror kind of is.

The way you can see this is by comparing horror to that ideal romantic comedy. With romantic comedy, there’s a single indicator of whether it’s still a romantic comedy or not: is there some version of a wedding at the end? A kiss, a run through an airport, a look across a crowded room. Even creating a new profile for a dating service can count. It shows that, in spite of many indications to the contrary, this protagonist still believes in love. In spite of everything, their hope hasn’t been crushed.

With horror, though, horror is still horror whether the protagonist defeats the monster or is pulled into the darkness. This isn’t to say that romantic comedy only has “happy” endings, while horror contains both “happy” and “not so happy” endings. What I’m getting at is a touch more unintuitive: horror, just like romantic comedy, only has happy endings. Just, we’ve been conditioned to label stories where the antagonist wins—where the protagonist loses, or is lost, or dies—as not-happy, as “down.”

Let me paint a scene up right quick, maybe that’ll let this make more sense: ten-year high school reunion, a locked building, some long-forgotten prank victim punishing the it-crowd of yesteryear, and a final girl who runs and runs until she can run no more, has to turn, fight, and, against all odds, find it in herself to put this slasher down. Same story with zombies or vampires or werewolves, with ghosts and haunted houses, with whatever horror baddie’s your go-to: the monster wins and wins and wins . . . until it doesn’t.

The closing image, now, right before the credits roll, it’s this survivor, chest still heaving, dropping that killing implement, be it machete or spellbook or asthma inhaler, and stepping over all the dead to get out to the sunrise, the music swelling, the zoom lengthening.

But—and you’ve seen this, you’ve read this, you’ve written this—what about when the story lets us sit back and relax, this happy ending such a sure thing, and then, bam, some version of an Acme safe falls from the sky, crushes that survivor? What about when there aren’t any survivors, when the halls of this high school are running red and those front doors never quite open?

I submit that, in horror, that’s still a happy ending.

What’s winning there, what we’ve been rooting for, it’s “horror.”

Whether we’re in our reading chair or seated in a theatre, we cheer when the darkness enfolds the protagonist at the very end, don’t we? It’s not because we harbor ill intentions for the protagonist—since we’ve identified with them, we do actually want them to survive, to, against all odds, win—it’s because, if the horror baddie overcomes this would-be hero’s best efforts, then that means that the horror pushes on, the horror survives, the horror will rise again on another page, another screen, or even just in our nightmares.

Being a tried-and-true horror fan, what could be a happier ending than seeing the thing you love persist, and bleed out into the world?

So, the way I read it, the way I write it, every ending you earn in horror, whether the protagonist succeeds or fails, is what we call “happy.” And no other genre or mode is like that, I don’t think. Agents in spy stories have to save the world, detectives in mysteries have to figure out who did it, kids in coming of age stories have to grow up, but horror protagonists, they don’t necessarily have to kill the monster. Sometimes, for the real happy ending, they have to get killed by that monster. It’s the only way the horror can keep on keeping on. 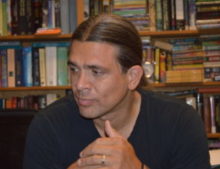