My earliest memory of fear comes from an old Nollywood film whose name I no longer remember. In one scene, two old women greet each other by “shaking hands” with their feet after running into one another on an evening stroll. Any half-decent Nigerian would immediately interpret this, as I did back then, to mean that these two women were witches interacting with a secret code. And as a child of said society, the idea of witchcraft and all I understood it to stand for—unrepentant harm, loss of control, dispossession, possession, death—terrified me to no end. So, regardless of the fact that the women on screen had simply executed a strange foot-shake, my child’s mind “recognised” the promise of harm. I felt a creeping, foreboding dread rise in my chest. I remember shutting my eyes and turning away.

I will point out that, by this time, I had already sat through The Evil Dead (1981) (bit.ly/30xCAYf) twice, and not once turned away.

Two “witches” greeting with their feet shouldn’t be more frightening than awakened demons attacking vacationing folks in an isolated cabin in the woods, right? And yet, there I was, stricken. Yes, The Evil Dead was quite frightful and jump-scary, but I left that movie without any deep-seated fear of those demons. Over time, I’ve come to realise the reasons for that were three simple things: I had never been to/seen a “cabin in the woods” (I grew up in a small but modern-ish city), I had never seen/read/been told tales of any “book of the dead,” and most of all, every single character in that film (White and American, demons included) was nothing like me (Black and Nigerian).

But guess what I’d heard tons of stories about—stories of demise so regular and close to home that they’d already happened to relatives and neighbours and friends? That’s right: witchcraft.

How collective fears birth the personal

While witchcraft, the occult and the supernatural arouse fear everywhere, they held a particular weight in 1990s Nigeria, in which I was raised. Nigeria in the ’90s had just bounced back from a bloody civil war, and was attempting to transition from a turbulent period of military rule into a democratic government. This period of huge economic uncertainty, freewheeling oppression and ethnic distrust made it effortless to suspect one’s neighbour—or “village people” in Nigerian parlance—of having an occult hand in one’s degeneration, rather than unpack the complex sociopolitical and socioeconomic forces affecting most people’s life opportunities. It didn’t help that the good/evil dichotomy of colonial Christianity and the rise of prosperity-gospel churches at the time banded together to pile on the blame. Anxiety reigned, and pointing fingers became a coping mechanism. Filmmakers knew this, and thus began Nollywood’s ’90s horror era, which consisted largely of films featuring the occult.

Richard Spurling, in an article for Fiction Factor (bit.ly/2OJHdsv) about why horror scares us, describes true horror as emotional disturbance. “The disturbance is inside you, in your own emotions,” he says. “The writer must gain access to your own secret centre.” That disturbance in the secret centre, though, comes from the fears of the society one is raised within. Alex Ago, a director at the USC School of Cinematic Arts points out (bit.ly/3fQqkZ4), “Horror as a genre is an expression of the collective anxieties of a society at the time . . . they allow us to collectively get a sense of catharsis by the vanquishing of these fears.”

I haven’t immersed myself into enough of horror culture elsewhere, especially Hollywood’s ubiquitous offerings, to understand its social aspects. But “Dreadful Delights,” a DirectTV study that sampled American horror movie watchers, managed to put together some statistics (soc.att.com/3jWw4mz) about what kinds of horror films have left the biggest impressions. It was revealing that the Paranormal (Ghosts and Spirits, Demonic, Possessions, Witches and Occult) still stood at the top of all data lists. Right below Paranormal on the scare-enjoyability scale, we get subgenres like Slasher, Phobias/Isolation, Zombies, Madness/Paranoia and Home Invasion (others fall far below these).

What struck me about these results is that, save for the recent pandemic that brought many across the globe to terms with the reality of enforced isolation, I could bet that many Nigerians like me would be little moved by films in the above-named subgenres. The fears prevalent in them are simply lower in the pecking order than those prevalent in the daily reality of a Nigerian existence. Slashers? No one can cut you down harder than the Nigerian police. Home Invasion? Well, they have to be worse than the armed robbery, kidnapping and terrorist gangs that have plagued Nigerians for decades. Unless the fears a horror story taps into somehow upend the equilibrium of an individual’s daily existence in a significant way, even evoking a few scares is hopeful.

This is all to say that until a horror story, in whatever form it comes, engages with the specific psychological horrors one harbours within the self—a self cultivated by the collective consciousness of existing as a part of a community—it’d be challenging to tap into deep-seated fear, no matter how universal the scare tactics employed may be.

Nigerian literature has not produced much horror authorship compared to its global counterparts. Literary scholar Zahrah Nesbitt-Ahmed traces the history of Nigerian horror literature to about fifty-five years ago (bit.ly/3fOfjHX), starting with D.O. Fagunwa’s Forest of a Thousand Daemons (1939) and Amos Tutuola’s My Life in the Bush of Ghosts (1954) to today’s Ben Okri (bit.ly/2ZOBxDT), Helen Oyeyemi (bit.ly/39ev34s) and Nuzo Onoh (bbc.in/3jrRwQ7). Recently, we’ve had authors like Lelsey Nneka Arimah (bit.ly/3eP9w3l) and ’Pemi Aguda (bit.ly/3eIxIo8) coming out of the works too, as well as platforms like The Naked Convos, who curated yearly Lights Out anthologies (bit.ly/2ZOn3Ef) featuring dark stories from newer Nigerian writers.

One thing is clear, though: you will be hard-pressed to horrify the average Nigerian with a book. Put it into film, though, and your chances increase exponentially.

The reason here is one of distance influencing belief. An understanding of the cultural nitty-gritties that underpin a story and its manner of delivery to a certain people are both critical to belief in that story, and belief is the soil from which fear grows.

Take this case in point: a significant portion of the Nigerian populace possesses low literacy. Horror literature has therefore gained little hold within these communities, finding more purchase elsewhere. Film is therefore a more impactful medium for telling horror stories to these communities, since it presents a lower barrier to entry. Literacy levels become a culturally distancing factor without even trying. Throw in the fact that Nigerian horror literature has also tended to shift away from directly propagating the occult into broader interpretations of the supernatural, and this distance increases. These seemingly progressive stories are perceived as more fictional by said communities than those that unashamedly emphasize the occult. Suspension of disbelief, which is required for horror to be effective, is suddenly significantly lower for literature than it is for film. Even when the exact same story moves between media, the results usually remain consistent (as seen with Nnedi Okorafor’s short story, “Hello, Moto,” [bit.ly/2ZMEHYL] adapted for film as Hello Rain by C.J. Obasi [bit.ly/2CV7zoZ]).

This is just one way cultural distance plays a big role in telling effective horror stories. Tapping into a society’s perceived threats requires a deep understanding of the machinations of said society. It means understanding how close or removed the community feels to those threats and how confident they feel about curtailing them. One must first access the collective and bridge whatever cultural distances exist in order to sow belief from which fear can be grown.

I often think about those old Nollywood women when I write. Effective horror stories, I’ve come to realise, are not always those that employ well-worn scare tactics, like characters struggling to survive a midnight attack at a cabin in the woods. Horror is truly about the loss of control and the vulnerability that follows. It’s about apprehension over the undetected and emotional disturbance over the unfathomable. To tell an effective horror story is to gently allude to intimate fears harboured by a certain people and threats deemed inescapable by them. Sometimes, all it takes to do that is a little foot-shake on an evening stroll. 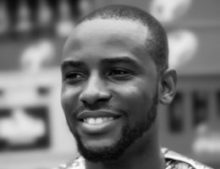 Suyi Davies Okungbowa is the Nigerian speculative fiction author of the godpunk novel, David Mogo, Godhunter (Abaddon, 2019). His internationally published fiction and nonfiction have appeared at Tor.com, Strange Horizons, Lightspeed, Fireside, Apex, Podcastle, The Dark, and other periodicals and anthologies. He lives between Lagos, Nigeria and Tucson, Arizona, where he teaches writing to undergrads and is completing his MFA in Creative Writing. He tweets at @IAmSuyiDavies and is @suyidavies everywhere else. Learn more at suyidavies.com.