The H Word: The Dirty South

“Later he saw Jesus move from tree to tree in the back of his mind, a wild ragged figure motioning him to turn around and come off into the dark where he might be walking on the water and not know it and then suddenly know it and drown.”
— Flannery O’Connor, Wise Blood

“. . . while the South is hardly Christ-centered, it is most certainly Christ-haunted.”
— Flannery O’Connor, “Some Aspects of the Grotesque in Southern Fiction”

The South is haunted. Haunted by Christ; haunted by ghosts; haunted by its sins, real and imagined ones. My own Southern childhood was profoundly haunted. I dreamed of witches and devils in the woods surrounding my house and imagined ghosts lurking on the ceiling outside my bedroom where the wood fire roared in the living room of the cabin I grew up in. Summers, when school was out, I spent most nights up reading until two or three in the morning, only partly because it was too hot to sleep and because I had a hard time putting down my books. The other reason was that I was often too frightened by what I was reading to turn out the light and give in to darkness and the troubled landscape of dreams.

For a long time, though, there was little connection between the genre horror I read and the landscape and culture in which I was growing up. The horror in my books all happened in other places — in New England, or the British Isles, or anywhere but where I was. The Southern gothic, the decadence, the grotesqueries that the likes of Flannery O’Connor and William Faulkner and Harry Crews and many other regional writers chronicled so effectively were such a part of the warp and weft of my existence that I didn’t recognize them as such until years later. Not every writer has to leave home in order to truly understand where they came from, but I did.

But certainly there was a sense of horror and wonder all about me, all the time. The sprawling rural Georgia county where I grew up was home to a vast network of dirt roads leading to broken-down houses, abandoned one-room schoolhouses, and cemeteries, and I explored them all. In rambles through my beloved woods, I sensed something both harrowing and holy: later, the work of writers like Arthur Machen and Algernon Blackwood would speak to that sense of numinous horror that nature can inspire. There were local tales of ghosts, like the long-dead preacher and ferryman who, it was said, would take you with him if you turned up on the shore near his gravesite at midnight (but I did, once, at New Year’s, and he failed to keep the appointment). The South also has a particularly cruel recent history — I also devoured slave narratives and tales of the Underground Railroad — and speaking both statistically and anecdotally, it’s by far the most violent region of the country.

There’s one more thing that the South has in abundance, and that is its devotion to God. O’Connor had more to say about the Christ-haunted South:

“The Southerner . . . is very much afraid that he may have been formed in the image and likeness of God. Ghosts can be very fierce and instructive. They cast strange shadows, particularly in our literature.”

The Christianity of the region is suffused with the supernatural. The Bible may or may not be the literal truth, the Word of God Himself, but there is little doubt among many believers that each day of our lives here on Earth is a battle waged between God and Satan with Jesus as your companion to help you through. With these stakes, the most mundane of existences become larger-than-life stories.

Even if you are not yourself a believer, in the rural South you will encounter this at every turn. It is not unusual for people to talk about these figures as part of casual conversation, and as frequent interlocutors in human affairs. People are always, always praying for you, because life is a treacherous journey rife with sickness and death and sin and temptation. For many Southerners, there is nothing figurative or metaphorical about religion — as with O’Connor, who once famously responded to Mary McCarthy’s comment that the Eucharist was a “pretty good” symbol with, “Well, if it’s a symbol, to hell with it!” Spiritual terrors are visceral and immediate; demons are real and might possess your soul, and hell is an actual place of eternal physical torment, the details of which would give pause to the most hardcore gorehounds. At least on the earthly plane, you are guaranteed an eventual end to your suffering.

After reading scores of stories set in other places, the first Southern genre writer to come to my attention was Michael McDowell, by way of his Blackwater series. They arrived in our house via book club editions — my mother belonged to every book club under the sun, I think — and I devoured them multiple times, overjoyed to find in McDowell’s Perdido, Alabama people who talked and acted like the ones in my own small town. I was utterly in love with the monstrous family saga of Elinor Dammert and her descendants. A Southerner himself, McDowell intimately understood the small-town South. The dysfunctional family ties. The sense of landscape, and the unpredictable and catastrophic nature of the weather. The sudden and ever-present violence.

The highly-educated McDowell — he had degrees in literature from Harvard and Brandeis — insisted in interviews that he wrote for the reader of the moment, not for posterity, but his pulpy gothics had something about them that elevated them above so much of the novel-length horror churned out in the 1980s, a texture and sensibility rooted in the land and culture in which he was raised — one that can’t have been entirely kind to him. It could not have been easy being a smart, gay teenager in the Anniston, Alabama of the 1960s. McDowell chose to live the adult portion of his all-too-short life (he died in 1999 at the appallingly young age of forty-nine) in the Northeast and Hollywood, yet something compelled him to repeatedly exploit his roots in fiction. When you come from the South, how can you not? What does a place like that do to a writer? What does a place like that do to a person?

The canon of Southern literature has no shortage of horrors that would be perfectly at home in any genre novel, from Faulkner’s Emily, sleeping for decades with the corpse of her dead lover, to O’Connor’s savage serial killer The Misfit to Zora Neale Hurston’s chronicling of Haitian and Jamaican voodoo practices in Tell My Horse.

But alongside that canon, the South has produced a whole slew of writers who dabble in or fully embrace genre horror: Karl Edward Wagner, Manly Wade Wellman, Lisa Tuttle, Caitlín R. Kiernan, Poppy Z. Brite, Joe R. Lansdale, F. Brett Cox, Steve Rasnic Tem, Anne Rice, Tananarive Due, Dale Bailey, S.P. Miskowski, and Nathan Ballingrud, to name a few. Not all of them wear their regional influences as openly on their sleeve as others, and we might quibble about those from places that have their own unique subculture — is New Orleans part of the South? Is Texas? Is Florida? All the same, to have grown up in these places means being steeped in a region that is hot, and violent, and Christ-haunted, and for better or worse, profoundly out of step with the rest of the country and maybe the world.

There is a danger, though, in writing about the South, that we start to believe our own press, to over-romanticize or fetishize poverty and violence and ignorance. Furthermore, parts of the South are modern, and diverse, and cosmopolitan, and the region is far more complex than it looks from the outside. Then there is the African-American experience, not the same as that of the white Southerner; much of what we think of when we say “Southern literature” is actually “white Southern literature,” although so many aspects of Southern culture are African-American in origin or influence. And increasingly, there is more to the South now than black and white; there are second and third generation Asian families and a rapidly growing Hispanic population. Maybe the notion of regional writing is vanishing altogether, or maybe the region is changing into something so unrecognizable that the term “Southern writer” is becoming obsolete.

And like many Southerners, I want to dismantle the stereotypes, but those stereotypes have a basis in truth. In the end, I can only speak from my own experience, which is that the South I know is all these things I have said, and a unique place that indisputably shaped me into the writer that I am.

Not necessarily into a horror writer — some of us are just born with a love of dark places and an inability to look away from the abyss. But for me, what living elsewhere throughout my adulthood has taught me about my own Southern upbringing is that sorrow and death did seem to be closer at hand there than in other places, and there is a morbidity, a memento mori quality to life in which I felt I was always reminded of my eventual inevitable demise and that of everyone I loved. I do not think this is a bad ethos for a writer to be grounded in, and most particularly a writer of horror, a genre that is far too often cheapened by a shallow or flippant approach to suffering. Christ-haunted; death-haunted; dark and beautiful and probably doomed; a place of snakes and cicadas and heat and thunder and ever-present divine revelation; this is the South of my childhood, and my imagination, and the underpinnings of all the stories that I grew up to tell. 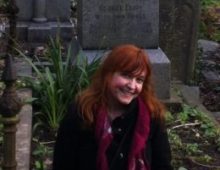 Lynda E. Rucker grew up in a house in the woods in Georgia full of books, cats and typewriters, so naturally, she had little choice but to become a writer. She has sold more than 30 short stories to various magazines and anthologies including F&SF, Nightmare Magazine, The Year’s Best Horror, The Mammoth Book of Best New Horror, The Year’s Best Horror and Dark Fantasy, Supernatural Tales, and Postscripts among others and has had a short play produced as part of an anthology of horror plays on London’s West End. She won the 2015 Shirley Jackson Award for Best Short Story and is a regular columnist for UK horror magazine Black Static. Her first collection, The Moon Will Look Strange, was released in 2013 from Karōshi Books, and her second, You’ll Know When You Get There, was published by Ireland’s Swan River Press in 2016.