The H Word: Resuscitating the Heart of Horror

In 1996 Wes Craven saved horror. That’s the abiding narrative anyway: that Scream revived a genre otherwise coding on the table. It’s hard to disagree, and I’m no depreciator of Craven’s vision. Scream was, indeed, an adrenaline shot for a horror corpus bloated by excess and exhausted by endless pacing in the same, diminishing circles.1 In less than a decade, cinematic horror had fallen from the heights of 1984’s A Nightmare on Elm Street (arguably the film in which raw, violent imagery fuses most effectively with the fantastic) to the gutter-lows of Freddy’s Dead: The Final Nightmare, a movie that functions more as a crude merchandising strategy than a horror story.

Horror fiction followed a parallel trajectory. The ’80s successes of Stephen King, Clive Barker, Peter Straub, Anne Rice et. al. created a heady atmosphere in which no idea seemed too grand, no cosmic scale too vast, and no page count too large. It led to an unhealthy engorgement that Michael A. Morrison termed “bestselleritis.” Meanwhile the major practitioners, perhaps wise to this growing malignancy, moved on to smaller, terser fictions, leaving their imitators to drag their swollen novels into the ’90s.

Irony it seemed, was the cure. Only by taking apart the body of horror could it be saved.

And thus, Scream. And rejuvenation.

Other classic examples followed Craven’s lead. Cabin in the Woods turned the meta up to eleven; The Blair Witch Project (1999) revolutionised the relationship between narrative and truth to seismic effect, only matched, in literary terms, by Mark Z. Danielewski’s House of Leaves (2000). Bret Easton Ellis’ Lunar Park (2005), Stephen Graham Jones’ Demon Theory (2006), Marisa Pessl’s Night Film (2013), Gemma Files’ Experimental Film (2015), and Paul Tremblay’s A Head Full of Ghosts (2015) are just a few more landmark texts in this inward-looking, genre-savvy, self-diagnosis. Each one is a brilliant piece of horror writing that I wholeheartedly recommend.

However, after two decades the impulse towards metafiction, parody and introspection threatens to damage the genre just as severely as the bloat it had aimed to correct. An excess of deconstruction has stripped the flesh, leaving only bones to be picked clean. Horror cannot be only about itself. There has to be some meaning above and beyond solipsism. And to take this elaborately over-extended metaphor to its conclusion, it could be argued that in the process of shocking horror back into life, Scream began the process of removing its heart.

Now, this could just be a reflection of my personal tastes. Despite spending years writing a thesis on metafiction in contemporary horror, I’ve always loved books that function on an emotional level more than those that prioritise an intellectual response. My favourite paragraphs in all of horror fiction are found in the conclusion to Stephen King’s IT, prose which can be generously described as “somewhat overwrought” or “a touch lilac”:

So drive away quick, drive away while the last of the light slips away, drive away from Derry, from memory, but not from desire. That stays, the bright cameo of all we were and all we believed as children, all that shone in our eyes even when we were lost and the wind blew in the night.

Drive away and try to keep smiling. Get a little rock and roll on the radio and go toward all the life there is with all the courage you can and all the belief you can muster. Be true, be brave, stand. All the rest is darkness.

Granted, King is not a representative figure, and IT is by no means a representative book. But since the mid ’90s, few other authors have injected their horror with such unabashed feeling. It’s something I crave; this prosaic romanticism that elevates fearful stories into the epic just as powerfully as any cosmic entity or multiverse. I have missed that lyrical heartbeat.

Cut to 2021 and something is stirring (I do promise to move on from the body-imagery now). This is the year that horror has turned back towards the earnest in . . . well, earnest. Some of the biggest names in contemporary horror have released novels that put the onus firmly back on the emotional register. In some cases this comes with a decidedly retro feel. Ronald Malfi’s Come With Me and Chuck Wendig’s The Book of Accidents would both be at home in horror’s ’80s paperback boom. The Book of Accidents, in particular, reads like a melding of Barker’s baroque fantasyscapes and King’s domestic, suburban uncanny. Both Malfi and Wendig’s novels are about relationships, family-ties, and loss, and they are unafraid of sentiment. Come With Me offers an extended exploration of grief unrivalled in most recent horror fiction. Rather than merely inciting the plot, the protagonist’s loss is an abiding influence from beginning to end, and Malfi writes about it with such poignancy:

No one thinks when they first meet a person that there is some cosmic clock counting down the years, months, weeks, days, hours, minutes, seconds, until you will stop knowing each other. It doesn’t occur to most people when you meet the person with whom you wish to spend the rest of your life that, at some point, one of you will leave.

The true horror, in this novel of mass-murder and maybe-monsters, is found in the intimate mundanity of a loved one’s passing. And it’s only so affecting because it is untarnished by irony or insincerity. It feels written from the heart.

More interesting still, though, are the novels attempting to marry the post-Scream, meta-fixation with something more heartfelt. Richard Chizmar’s Chasing the Boogeyman aims to hoodwink the reader, Blair Witch-style, with the pretense of autobiographical vérité, whilst inserting both a fictional serial killer and a sweetly-sentimental coming-of-age tale into the mix. The result is a piece of ‘golden-hued horror’ in which the playful postmodern architecture surrounds and supports the weight of narrative sincerity. Again, as in Malfi’s Come With Me, there may be killers in the shadows, but the more profound fear is of everyday loss:

I realized how vast the world around me really was and one day soon I’d be leaving this place I’d always called home, to venture out on my own. My friends would be scattered to the four winds and some I would never see or talk to again. Our parents and brothers and sisters would grow old and eventually we’d have to say goodbye to them. Nothing would ever be the same.

Of course, leave it to Stephen Graham Jones to most successfully reconcile irony and authenticity. Jones has always played with horror tropes. Demon Theory (2006) does the full meta-job, bursting with pop-culture references, footnotes and cinematic nods, whilst Mongrels (2016) and The Last Final Girl (2012) are head-on confrontations with the werewolf and slasher traditions respectively. The latter is of particular interest to Jones. He even describes his much-lauded 2020 novel, The Only Good Indians, as an attempt to take Jason Voorhees to the Reservation. All of this playfulness makes sense when Jones explains how much his horror sensibilities were shaped by Scream. When I interviewed him, he told me how watching Craven’s movie “changed his brain” and how “all the homework I’ve been doing all my life was suddenly worth it.” However, he also made it clear when speaking to Nightmare (bit.ly/3G1DH5M) that though his “heart is forever in 1996 with Scream” his own work strives for more than just cleverness. “If the postmodern stance is going to be coming from a place of irony, though—at least a distrust in the ability of a story to be in any way honest—then, no, [Jones’ work] is not going for that.” To me, he said it even plainer: “when I’m planning a novel, what I’m looking for first is sincerity.”

All of that—both the love of meta-horror and the urge to transcend it—is crystallised in My Heart is a Chainsaw. It is the apotheosis of Jones’ work to ensure that genre-commentary is something more than an intellectual exercise, or sneery pastiche. The story of Jade, a slasher-obsessed teenager in a dwindling Idaho town, escorts the reader through 200 pages of references, easter-eggs and inside-jokes, before blossoming into a profound story of trauma and rage and survival. The very climax of the story is Jade’s realisation that pop-culture savviness is not enough, that real feelings—her own suppressed feelings—matter. “This is no time to lose the line between movies and the real world,” she realises at a crucial moment. For Jade, this is her becoming, and it closes the circle on what Scream began.

As such, the book showcases not only Jones’ own search for sincerity in an ironic landscape, but its shift from one register to another stands for the genre as a whole. The nervy introspective preoccupation is quieting for a while, whilst somewhere within, a heartbeat can be heard. It’s slow, but insistent, and I’m delighted to hear it.

1. This article is happy to make unashamedly broad generalisations. I know there is always good horror being made. 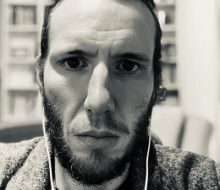 Neil McRobert is a writer, researcher and the host of Talking Scared podcast. After completing a PhD on Gothic and horror he fled the halls of academia to live in an old, haunted village in the north of England. There, he interviews luminaries from the world of horror and writes about things the polite folk don’t mention.