(Warning: Spoilers for The Witch and Get Out.)

If you haven’t seen The Witch (2015) and Get Out (2017), you must have been living under a rock. The former was a breakout title for A24 Films, becoming the fifth highest grossing movie they’ve put out to date (with over $25 million dollars in earnings). And the latter was nominated for several Golden Globe and Academy Awards, winning the Oscar for Best Original Screenplay. Two very different films, they both took chances at the box office—with their stories, images, themes, settings, and overall experiences. By garnering financial and critical success, they opened the door for a slew of experimental, edgy, divisive horror films.

While A24 had put out other controversial, innovative, and unsettling films before The Witch (such as Ex Machina, Enemy, and Under the Skin), this was one of their first horror movies, and audiences definitely responded to it. It takes a lot for a line in a movie to become “meme-worthy,” but Black Philip invoked some powerful emotions when he asked young Thomasin (Anya Taylor-Joy), “Wouldst thou like to live deliciously?” The answer, of course, was yes.

The backdrop of religiosity that hung over this film created an atmosphere ripe for tension. What might lurk in the woods, once they left the settlement? Who was to blame when the baby disappeared, the eldest son died in a feverish state as he quoted the bible, the twins went crazy, as the mother crumpled under loss and speculation, the father gored by the goat? Thomasin, of course.

But audiences had to be able to relate, to understand, to make sense of this period piece. It was essential to tap into some elements that were familiar—the concept of the “witch in the woods,” and her youth retained though the flesh and blood of children. I mean, we’ve all heard of Hansel and Gretel, right? But where this film took us to new heights was in the cinematography, the imagery and emotion, the balance between horrific and hopeful, as well as the way the movie ends.

The scene where Black Philip speaks, a conduit for Satan, is a tense, unnerving, and oddly inspiring moment. Blamed for all that has gone wrong, Thomasin has lost everything—and none of it was her fault. If she’s going to pay the time, she might as well commit the crime. The sadness in the simple offerings is deep: “Wouldst thou like the taste of butter? A pretty dress?” Is that all it takes? When you’re starving at the edge of a town where you are no longer welcome, and everyone around you has perished or betrayed you—the darkness has a certain appeal. “Wouldst thou like to see the world?” Of course she would.

Disrobing, Thomasin signs her soul away, and wanders into the woods to join the other naked, genuflecting witches, eventually rising into the sky, closer to the swelling moon, laughing, as she floats up into the air. The loss of innocence here, the power of the warnings and signs throughout, the musical score running over it all is intense. A smart movie, this wasn’t the slasher that some fans wanted or expected. No, it was much more.

In old school horror, The Witch would have focused more on the . . . you guessed it, witch. Or on Satan. They would have been more present, had more screen time, and there would have been much more gore. (There is some gore in The Witch, but not much, mostly in the shadows.) Hereditary, the only horror film at A24 that has done better than The Witch, currently standing as the second-highest grossing film in studio history, also takes this approach. At the end of Hereditary, we get the revelations about the demonic king, Paimon—and his role in the death and fate of the main characters. If this were classic horror, we would have known more sooner, seen the entity, and lingered on the gore more often. (Something I think failed the new Suspiria at the end.) As it is, showing restraint (for the most part) helped Hereditary to maintain tension, and keep the terror psychological, avoiding the old school jump scares to focus on emotion.

Not to mention the financial success of The Witch certainly gave A24 the confidence to take on additional innovative horror in Hereditary.

A film with a much different feel than the restrained, stoic, and visceral The Witch, Get Out is a movie built on the success of Key and Peele and Black Mirror, tapping into the political and sociological intellect of Jordan Peele, all while maintaining a sense of humor. But don’t let that distract from the weight of this film.

Throughout the movie there is a push and pull of the lightness, laughter, and desire between the two main characters, Chris (Daniel Kaluuya) and Rose (Allison Williams). We trust that they know what they are doing, that Rose won’t get Chris in trouble, and that the family will welcome him in with open arms. But bit by bit we get a sense that something is horribly wrong. From the staff, to the weird vibe the parents give off, to the gathering at the house—there is that voice in our heads as well, uttering that old horror mantra, “get out!”

As more and more is revealed, and things get stranger and more intense, the truth behind the event comes out—the auctioning of Chris, the transferring of mind and soul into young black bodies, the secret society, and even Rose’s role in it all. When Rose’s mother, Missy, hypnotizes Chris, and tells him to “Sink into the floor,” it’s a hallucinogenic moment, reminiscent of the Twilight Zone, banishing him to the “sunken place.”

It was a perfect movie for our current zeitgeist, tapping into racism, paranoia, and the ugly truth that lurks in the hearts of the rich, entitled, and primarily white patriarchy. Having the courage to put out a film like this is what helped to set the stage for other movies commenting on issues such as mental health, relationships, sexism, religion, and more. Get Out taps into familiar horror films that blend the sense of other, as well as paranoia, such as Invasion of the Body Snatchers. Not to mention a hint of The Stepford Wives. But Peele takes this beyond a story of body swapping and possession.

When we finally do get to the end of the movie, as Chris escapes, a police car pulls up, and it’s every racist, futile climax—he’ll be arrested, and tried for the murders, his wild conspiracy story falling on deaf ears. I mean, of course the cop would be in on it, right? But instead of the police, it’s his friend, Rod, who works for the “T-S-motherfucking-A.” We get the nod and wink to the camera. We know how this was supposed to end. And that’s part of the way that Peele and cast subvert the expectations here.

(Side note: there was in fact an alternative ending, the “first” ending where this darker fate played out, Chris in jail, unjustly. But it was deemed too dark, with Peele feeling that post-Obama we needed a hero, a more positive spin on it all.)

Blumhouse, like A24, knew a winner when they saw it, no matter who they made uncomfortable. I mean, that’s the point, right? We all squirmed in our seats for different reasons.

Take a look at The Killing of a Sacred Deer, directed by Yorgos Lanthimos. Now, while this film is definitely more serious than Get Out, it also taps into the conventions of the genre while innovating. The fates of the family members in more traditional horror movies would have been dealt out in standard slasher fare—simplistic violence and vengeance. The way the horror extends and fulfills in Sacred Deer is a very creative way to show the relationship between the boy, Martin, and Steven, as well as Steven’s family.

I think of the trust that was extended in Get Out between Chris and Rose, and how that faith was betrayed. We all put trust in our doctors (especially surgeons), to honor their oaths, and to follow a code of conduct. In The Killing of the Sacred Deer, Steven’s entitlement, the irresponsibility of going to a surgery drunk, and the consequences that play out—it ripples and expands to blanket Martin, as he loses his father on the operating table.

The unsettling way in which Martin dispenses his justice is hard to watch. Much as the bidding on people as property in Get Out is hard to watch—the old, rich white patrons striving to inhabit the young, black, virile flesh. While Peele and Lanthimos are stylistically different, one utilizing satire and bigotry, the other leaning into the surreal and abstract, both created original, emotional and lasting films that subverted the expectations of the genre, taking us to new, disturbing places.

When we look at the cinematography and content of The Witch and Get Out, the chances they took on the big screen, I think it’s easy to see how they might have helped influence other films that came after. If they didn’t have financial and critical success, I don’t know if we could we have had the following movies: It Comes at Night, A Ghost Story, The Killing of a Sacred Deer, A Neon Demon, A Dark Song, Mother!, The Ritual, A Quiet Place, Annihilation, Hereditary, and Suspiria (2018) .

I don’t know what’s next, but what I’m thrilled to see are smart movies, complex films, stories that aren’t one link in a dying franchise chain, or regurgitations of similar work. While not every film I’ve listed today is going to be a classic—some blowing the ending, some staying too much into the past, some leaving too much off the screen—at least they are creating original, compelling, emotional work. To me, when work is polarizing, when audiences are divided—some hateful and upset, others inspired and enlightened—the filmmakers are onto something. If you water it down, and push it too much to the middle, try to market the film for mass consumption, you will never do anything great. You have to swing for the fences, even if you strike out now and then. It’s the only way to hit the ball out of the park—to do something truly special.

It’s not enough to write an original screenplay, or adapt an unknown novel. In horror, you have to show enough of the familiar in order for us to relate, understand, and recognize what’s going on—we have to be grounded in something concrete. And then, take us to new places—teasing out the balance between terror (tension) and horror (the revelation); tapping into both the epic in scale and the intimately dysfunctional; creating a perspective, experience, and setting that isn’t cliché and obvious. It’s not easy. But the best filmmakers are forging their own paths through the haunted houses, abandoned asylums, and rotting forests—shining a light into the farthest corners of the horror universe to give us wonder, fright, and enlightenment. 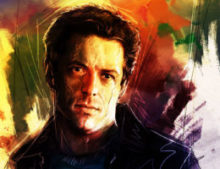