“You have to give it back to me tomorrow because I have to drive an hour south again to return it, and I don’t want to pay a late fee.”

He handed me the VHS tape, secure in its clunky plastic rental case. My nerves tingled as I read the title on the spine: Dawn of the Dead.

The year was 2001. I was a freshman in high school when a junior on the track team learned that I loved horror movies but had never seen Romero’s magnum opus. Night of the Living Dead was a masterpiece readily available in the public domain, but the legendary sequel hadn’t yet been transferred to DVD, and VHS copies were hard to come by. These were the days before Netflix, so if your local Blockbuster didn’t carry a film, you might just have to hunt it down at a mom-and-pop video shop in South Jersey.

That night, I dimmed the basement lights and fed the black cassette into my VCR, summoning a horde of undead shoppers to my screen in all their gory glory. There was no turning back for me now. I was infected, a horror fan for life.

Even though this wasn’t my first exposure to the genre (thanks to an older brother who dabbled in the dark side of pop culture), I had never experienced a true cult film before. The internet was still in its infancy, so certain celluloid nightmares were only learned about through word of mouth. It meant something to be personally invited into the fold of forbidden horrors through a proper blood christening.

While attending my first StokerCon this year, I met so many horror fans who’d undergone a similar watershed moment at some point in their youth. They were handed a ratty paperback or burned-out VHS tape by some family member or friend who said with a knowing smile: “Check this out.” In Campbellian mythic journey terms, it’s the Meeting with the Mentor stage, when a wise elder imparts some magical tool or wisdom to the young novice, empowering them to take their first step toward transformation.

Ironically, my rite of passage happened at a Catholic prep school. Every week, we ate the flesh and drank the blood of a man who rose from the dead; and yet, the priests balked at my attempt to quote The Zombie Survival Guide in my yearbook page. Still, that religious upbringing served as an apt training ground for horror fandom as I learned the lure of scripture and ritual. I rejected Catholicism but embraced horror films and books as my sacred scriptures; and sharing the gospel in unholy communion was a ritual that I’d come to see as my true calling.

I quickly built up a ghoulish reputation among my high school friends. Going over to McAuley’s house meant bearing witness to some violent Italian giallo or creepy Japanese kaidan that was sure to shred your nerves. These gatherings persisted into college, when I hosted a raucous drinking game for my dormmates set to Friday the 13th Part VI: Jason Lives. To this day, I still get the odd text message or DM from people I haven’t spoken to in years, asking me to recommend a scary movie or creepy read.

But the joy of sharing tales of terror was imprinted on me long before all that by a formative children’s TV show. Every episode started the same way: a group of kids gathered around a campfire in the forest, taking turns telling each other scary stories. For children of the 90s, Are You Afraid of the Dark? was an iconic representation of our most ancient shared tradition: oral storytelling.

In Yuval Noah Harari’s enlightening book Sapiens: A Brief History of Humankind, the historian investigates the roots of civilization through the development of human language. According to Harari, the first words ever spoken by our species—out of sheer necessity—was gossip. Being inherently social animals, we developed the need to communicate potential dangers and identify untrustworthy individuals within our group.

In other words, the first stories ever told were urgent warnings rooted in survival, pre-urban legends. Horror stories. These macabre tales endure through the ages not only because they prepare us for death. They also teach us how to live, together; and being a member of a civilization means considering the legacy we leave in our wake.

It’s one of the things that inspired Curse of the Reaper, my novel about an aging horror film actor whose only proof of life lies in the fading glory of his 80s slasher franchise. Flesh-and-blood serial killers like Freddy, Jason, and Michael always transcend mortality, morphing into spectral stalkers, relentless zombies, and possessed cult pawns. You can ban his name on Elm Street, paint “Forest Green” over the Crystal Lake sign, or leave that old Myers house to rot; but the inherited lore of these deathless monsters lives on in the whispers of a new generation. The ghosts of our past will always find resurrection and seek new blood, because that’s the nature of a true horror legend.

Of course, word of mouth can only extend so far, and our collective parables found more permanent preservation in the printed word. If you’re seeking a hallowed temple for stories freely shared, the library awaits. Or you can hunt through a used bookstore for hand-me-down treasures. When I lived closer to downtown Los Angeles, I would carry my recent reads to The Last Bookstore and resell them for store credit. Then I’d trek straight upstairs to the Horror Vault (a literal bank vault where the deadliest texts are locked away), inevitably leaving with a heavier bag than I came with.

Reading a used horror book often feels like moving into a haunted house. I know that someone inhabited these passages before me, trembling as they turned the same sharp corners. Every new visitor breathes fresh life into this contained world of darkness by reading the printed spell and begging to be possessed.

Lately, I’ve been more inclined to support fellow authors with a new purchase from an indie bookstore before dropping my finished reads in one of my neighborhood’s Little Free Libraries. These bookish birdhouses serve as a quaint throwback in our modern era, when tangible tomes and tapes are being rapidly replaced by digital data. But amidst the endless waves of nostalgia, the hand-me-down ritual continues to find technological evolution.

Social media has given rise to the Bookstagrammers/YouTubers/TikTokers who mentor thousands of followers toward their next chilling read. Podcasters have pulled back the veil on previously mysterious storytellers through intimate fireside chats. Entire streaming services like Screambox and Shudder are now dedicated to cult horror cinema; the latter even resurrecting the drive-in experience with Joe Bob Briggs and his thriving #MutantFamily on Twitter.

While online communities certainly have their perks in growing numbers and global reach, nothing quite beats the vintage touch of a human handoff. Recently, a friend with no particular affinity for horror was over for dinner when the conversation turned toward the ongoing nightmares of our modern world. Knowing that horror fiction offers a cathartic platform to process real-life terrors, I went to my bookshelf.

“I’ve got a book for you,” I said, plucking a pink paperback. His eyes went wide at the striking cover for Malcolm Devlin’s And Then I Woke Up.

“Okay, I’m sold,” he said, flipping it open and pausing inside the cover. “Wait, this is signed by the author.”

“Are you sure you want to give this to me?”

“Absolutely,” I affirmed. “Just make sure you give it to someone else when you’re done.”

Anyone who’s read Devlin’s book knows that passing it from one person to the next, like that cursed video tape in The Ring, is an especially appropriate rite for that allegorical tale. Sure enough, I received a text message the next day: “Dude! This book is so good! I have no idea how it’s going to end and that’s the best.”

I smiled at my new convert’s wise words. Welcome to horror: mirror of life. None of us know when our time will end, but that’s what makes the journey so frightfully fun; and the stories we share will live long beyond our graves. 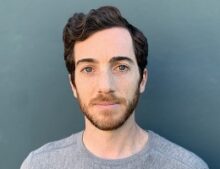 Brian McAuley is an HWA author whose debut novel Curse of the Reaper will be published by Talos Press on October 4th, 2022. His short story “H.I.D.E.” can be found in Dark Matter Magazine’s Issue 010. Brian’s produced credits as a WGA screenwriter range from family sitcoms to horror films. He received his MFA in Screenwriting from Columbia University, and he currently lives and teaches writing in Los Angeles. Connect with him on social media @BrianMcWriter.