Even though it may be uncomfortable to admit, there’s an intimate connection between horror and humor, where complete silliness can be the spoonful of sugar to make the violent, bloody medicine of horror go down.

There’s a long tradition of horror that overtly mingles chills with comedy. Think of The Addams Family or The Munsters, Buffy the Vampire Slayer, Army of Darkness. As a kid, I was a big fan of the goofy animated movie Mad Monster Party, which I tried to emulate when I wrote the comic series Grumpy Old Monsters for IDW, about a toothless Dracula, a werewolf with male-pattern baldness, a decrepit mummy, and an unraveling Frankenstein monster who all break out of the Rest In Peace retirement home in order to rescue Castle Frankenstein from evil real-estate developers. It was so silly, my wife and I had a blast writing it.

When the president of the Horror Writers Association asked me to develop an original HWA anthology, I chose humor and horror as my theme. No constraints other than that the stories had to be horror, and funny. The submissions poured in. Blood Lite was extremely successful, followed by Blood Lite II: Overbite and Blood Lite III: Aftertaste.

While watching a succession of grim and gut-wrenching zombie apocalypse stories—The Walking Dead, World War Z, 28 Days Later, Call Me Legend—I got a little tired of the bloody and jarringly violent fare. Exhausted, I wondered if it wasn’t time for a Spaceballs equivalent in the genre. I wanted a refreshing take on zombies, even if I had to write it myself. 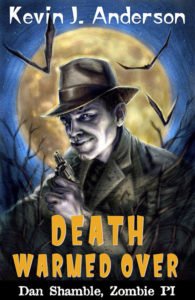 I imagined a world where all the legendary monsters returned (due to an unusual alignment of planets, with a virgin’s blood spilled on the pages of the Necronomicon, no matter that the blood came from a paper cut, and the virgin was a forty-year-old mousy librarian). In a world like that, with all the monsters just trying to get through every day, I imagined they would eventually have mundane problems like the rest of us—divorces, lawsuits, missing persons, etc . . . and that would provide plenty of job security for a private eye willing to work in the Unnatural Quarter. Dan Chambeaux hangs his shingle and takes on bizarre clients, until he is murdered during an investigation. But he comes back from the dead and goes back on the case, serving as the Quarter’s best-known zombie P.I.

The situations and characters in the Dan Shamble series have intrinsic humor. I teamed him up with a bleeding-heart human lawyer who wants justice for monsters, and a beautiful, if ectoplasmic, ghost girlfriend. Then I added an abrasive human cop, Officer Toby McGoohan (McGoo), who got in trouble for telling politically incorrect jokes and was transferred to the Unnatural Quarter, where it’s okay to make fun of monsters. Together, they encounter the best and worst that unnaturals (and humans) have to offer: a mummy suing to be emancipated from the museum because he is a person, dammit!, not property; or a woman seeking a divorce from a newly turned werewolf because her husband is “not the man she married”; a skittish vampire in fear for his life because he sees pointy wooden stakes everywhere.

After pages of stupid puns (“So, Shamble, you’re dead and you’re a private detective. Does that mean we should call you a ‘stiff dick’?”) and terrible jokes (“What goes Ha, Ha, Ha . . . thump? A zombie laughing his head off.”), when the reader gets to the truly horrific parts of werewolves being scalped in the streets, victims torn apart by demon-possessed feral chickens, hell demons decorating their apartments with freshly extracted human entrails, the impact is even more intense, but palatable, because the other parts are deceptively silly. The shock of the real horror is balanced out by the humor.

I’ve written straight, intense horror, been nominated for the Bram Stoker Award, and I’m also well known for sprawling space operas and epic fantasies. Sometimes, though, I just like to be funny . . . even stupid. The Dan Shamble adventures are downright slapstick. He prides himself in being “well preserved” and hates those disappointing examples of rotting, lurching zombies with a craving for brains.

The series gives me an opportunity for dark humor, ridiculous humor, puns and pratfalls. But when dealing with murders, prejudice, racial inequality, abuse, corporate corruption, and gross intolerance, sometimes the best delivery system is through spoofs and snickers. I’ve done five novels and two story collections so far, and I plan on many more. 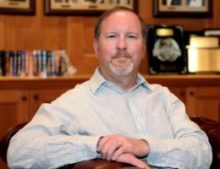 Kevin J. Anderson has published more than 160 books, 56 of which have been national or international bestsellers. He has written numerous novels in the Star Wars, X-Files, and Dune universes, as well as unique steampunk fantasy novels Clockwork Angels and Clockwork Lives, written with legendary rock drummer Neil Peart, based on the concept album by the band Rush. His original works include the Saga of Seven Suns series, the Terra Incognita fantasy trilogy, the Saga of Shadows trilogy, and his humorous horror series featuring Dan Shamble, Zombie PI. He has edited numerous anthologies, written comics and games, and the lyrics to two rock CDs. Anderson and his wife Rebecca Moesta are the publishers of WordFire Press.