It would be easy to blame Indiana Jones. I saw Raiders of the Lost Ark in the movie theater five times upon its initial release, and I’ve viewed it dozens of times since then, introducing my children to the dangers and joys of action-archaeology. But to suggest that my interest in digging up the past—or more accurately, digging into the past and uncovering ancient terrors best left buried—didn’t start with Harrison Ford. The motif is broader than that, and goes back much earlier.

Was it the dreadful 1956 film The Mole People, in which scientists find a lost, underground city of mutant creatures? Almost certainly not, though sequences from that film do linger in the back of my consciousness. (As an aside, there’s a direct connection from my love of all of this subterranean lore to my adoration for Jennifer Toth’s remarkable non-fiction book The Mole People, about people living beneath the streets of New York City). At a certain age, I sought out all sorts of stories in various mediums that had to do with archaeology, underground mysteries, terrifying discoveries. In those days, local television channels packaged their old horror and science-fiction films under the umbrella titles Creature Feature and Creature Double Feature. You never knew what you were going to get, whether the film would be awful or wonderful, or some blissful combination of the two.

What is it about such stories that speaks not only to me, but to so many of us? Horror and adventure stories are the two sides of the double helix in my DNA, and I’m not alone, but why do these tales resonate so deeply? To answer that question, I turn to one of my favorite films and one of the greatest feats of cinema, the original version of King Kong. In 1933, when the film was first released, the suspension of disbelief required of the audience would have been only a tiny fraction of what’s required today. The idea that explorers going off the routine shipping lanes might encounter a mist-enshrouded secret island previously unknown to “civilized man,” and that this island might be home to otherwise extinct dinosaurs, giant insects, and towering ape-gods, would have seemed fantastical, but perhaps not so far-fetched.

Traveling further backward along our pop culture timeline, we find one of the clear inspirations for Kong’s Skull Island in Sir Arthur Conan Doyle’s 1912 publication of The Lost World, and a host of other tales about explorers venturing into dark jungles and deep caves to discover dangers and wonders they had never before imagined. Tales of Egyptian tombs, legends of lost cities, long-buried evils unleashed anew . . . they speak to our need for mystery, for wonder and awe. More than that, at their core these tales resonate with our innate yearning to explore the unknown, to shine light into the shadows. John W. Campbell’s seminal tale “Who Goes There?” was the source for both Howard Hawks’ The Thing from Another World and John Carpenter’s The Thing, and each iteration must be deemed science fiction. But these are also adventure stories, and horror stories, tales of mysteries being dug up from the ice in parts of the world ordinary people perceive as near-mythical and certainly unknown. H.P. Lovecraft’s At the Mountain of Madness does the same.

An entire volume could be written tracing the history of such stories, but what intrigues me the most is the shrinking of the unknown world. As time has passed, little of our planet remains unexplored or uninhabited, requiring authors and other storytellers to work a bit harder to achieve the suspension of disbelief that came much easier eighty years ago. Often, authors resort to period settings for that reason, partly as a way to trick the sensibilities of the reader—to lull their modern skepticism—but also to put us in a world without cell phones, without the internet, a world with a much greater sense of isolation and danger. (Or, perhaps I should say, a different sort of isolation and a different kind of danger.)

Fortunately, there are still mysteries in this world and beyond it, still things that are unknown, still caves to be explored. Just within the past few years, the world’s longest cave system was discovered. Within the past few months, archaeologists in Egypt have made new discoveries of tombs and the remains of pharaohs. Regardless of what popular thought would have us believe, there are still remote, uninhabited islands.

Beyond that, there are other mysteries, other unknowns that inspire us to adventure and terror. The universe awaits exploration, and endless suspense, thrills, and scares may be found in fiction or in reality beyond our planet. The ocean depths still hold many secrets. There are ancient histories that archaeologists have yet to discover, just waiting for us to discover—or invent—them.

A sobering thought, however: much of the unknown that simmers around us springs from the changes our planet is enduring. Whatever we think we understand about Earth, its caves, and its oceans, all of it is changing. Geography will change. Retreating ice pack will reveal secrets and dangers. Uninhabitable lands may become habitable, while, terrifyingly, the opposite is also true. As frightening as this reality may be, it also provides extraordinary fodder for fiction.

So many great horror and adventure stories begin with someone digging up something they should have left buried. I think we need these stories to remind ourselves that we don’t know everything, that it is dangerous folly to assume otherwise. Also, though . . . the kid in me says “they’re just cool,” and they really are. The magic of The Mummy and Journey to the Center of the Earth still resonates with me. The Lost World and King Kong and Raiders of the Lost Ark are inextricably imprinted on my imagination, and are major ingredients in my own creative stew, into which I dip the ladle every time I come up with a new story idea.

Of the modern novelists who’ve inspired me with tales of digging too deeply and uncovering the unknown, the ones who spring most readily to mind include Preston & Child, James Rollins, Scott Smith (with his terrifying The Ruins), and Anne Rice, in her novel The Mummy, or, Ramses the Damned).

In my new novel, The Pandora Room, I get to delve into some of history’s greatest mysteries, mix them up with archaeology, strange-but-true geology, ancient civilizations, twisted rituals, ghosts, and a modern socio-political powder keg . . . all wonderful ingredients from the author’s brain-stew. As I write this, I’m in the midst of writing the TV bible and the pilot episode for Ben Walker, a television series based on several of my novels, including Ararat, The Pandora Room, The Ocean Dark, and next year’s brand new novel in the series, Red Hands. The little boy who loved digging up the past, the kid who embraced Doc Savage, Indiana Jones, and The Thing from another World, has grown up now.

And he’s loving every minute of this adventure. 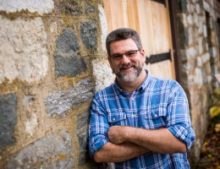 Christopher Golden is the New York Times bestselling, Bram Stoker Award-winning author of such novels as Ararat, Snowblind, Wildwood Road, and The Pandora Room. With Mike Mignola, he is the co-creator of two cult favorite comic book series, Baltimore and Joe Golem: Occult Detective. As an editor, he has worked on the short story anthologies Seize the Night, Dark Cities, and The New Dead, among others, and he has also written and co-written comic books, video games, and screenplays. Golden co-hosts the podcasts Three Guys with Beards and Defenders Dialogue. In 2015 he founded the popular Merrimack Valley Halloween Book Festival. His work has been nominated for the British Fantasy Award, the Eisner Award, and multiple Shirley Jackson Awards. For the Bram Stoker Awards, Golden has been nominated eight times in eight different categories. His original novels have been published in more than fifteen languages in countries around the world. Please visit him at www.christophergolden.com.