I get so stressed watching horror—especially in theaters, especially in the dark, where I have nowhere to hide—that I hold a bag of popcorn over my eyes, sweat pooling in my palms, while my friends teasingly jab me in the ribs. It’s not the idea of a ghost jumping off the top of a dresser that gets me. It’s the anticipation. It’s the tightrope between knowing and not-knowing: knowing that your safety will be breached, but not knowing when.

The first time I remember running away from something scary, I was ten years old. My father had been in an intensive care unit for two months after having had two massive, sudden strokes. My mother spent a lot of time at the hospital, but I had only visited once, one terrible time that’s burned into my memory: my completely incapacitated father, weeping as he looked at me. I was afraid to tell my mother that I never wanted to visit again, but luckily I didn’t have to, because she decided she didn’t want me to “remember him like that.” That’s how I knew he was going to die; I just didn’t know when. So when one night my mother urgently shook me awake, I knew. I just knew. I pulled the blanket over my head and whined, “No!” trying to drown out what my mother was saying, which was: “We have to take Daddy home.”

(Indonesia is a Muslim country, so burial must take place before sundown on the day of the death. My father had to be buried in his home village about eight hours away, assuming minimal traffic, so we had to get on the road early. I hadn’t been to that village since I was an infant, and at one point his relatives—strangers, all—tried to encourage me to view his body. My mother threw herself in front of me like a human shield. She’d do the same a couple years later, when her own father died in Kansas and there was a final “viewing.” You don’t have to look.)

I have a heightened startle response. When I’m startled, I scream bloody murder for whole minutes, well past the point that the shock should have worn off, well past the point of propriety, almost like I’ve been holding in a scream that just needed an excuse. Some babies are born with it, as part of a neurological disorder that also causes infants to seize up immediately upon birth. Other people develop it later, as a side effect of PTSD, or of being what my therapist calls a Highly Sensitive Person. It boils down to having your nervous system caught in survival mode. “Frayed nerves,” in layman’s terms. My father had them too. My best guess is that my DNA already had me hardwired toward hyper-vigilance before his death confirmed to me that the world was unsafe, and now I’m just stuck on that setting, like a frozen deer. Not that I didn’t always tend toward calamity: when asked to draw mountains, I drew exploding volcanoes.

Being stuck in survival mode hurts. You ache. Your joints, your jaw, your guts. When I was in college I developed a stomach pain that would fold in on itself like a rag being wrung. The only thing that worked was—surprise!—anti-anxiety pills. It also exhausts your soul, thinking everything is a threat, but it’s better than ever being caught off-guard again. I tried to find safety through other means, sure: aggressive promises, over-planning, divination. But none of these methods are fool-proof, because the future’s not ours to see, as my mother used to sing to me. As you wander through the haunted house that is the world, armed only with the narrow beam of your flashlight, there is no way to know when the ghost will appear. You only know, because you were born knowing, that it’s waiting for you, somewhere, in the dark.

Or you can burn the house down. You get overwhelmed easily when you live at boiling point, and eventually you short-circuit so often that it seems more rational to force a shutdown. To “opt out” of life. That’s one way to get off the tightrope between knowing and not-knowing:

The funny thing about suicidal escapism is that when you refuse to look—when you crumple to your knees and simply refuse to go on—you’re actually trying to keep all possible realities alive. You’re trying to circumvent the jump scare. That’s what I’m doing when I turn off a tennis match and run out of the house in a dazed panic when it looks like my favorite player is about to lose. I’m stopping time. I’m pulling the blankets over my head. I’m pulling us back into Schrödinger’s box. We’re dead. We’re alive. We’re safe, spinning, suspended in time.

Tennis, by the way, is death by a thousand jump scares, which is why I watch it on a five-second delay: to give me a tiny buffer against reality. Soccer and basketball are fluid, groups of humans moving en masse like a blurry insect swarm. Football and baseball are ritualistic and comfortably predictable. Figure skating is smooth sailing punctuated with a few big actual jump scares, every time a skater tightens up into a taut missile and launches into the air, holding their breath. Tennis, though, is an endless heart attack. Every single staccato shot back and forth over the net is a jump scare, because the ball whips across the court—between knowing and not-knowing—like a bullet. Bang bang bang. You want to crawl inside your skin so you won’t have to watch because you know that when a ball traveling over 100 mph suddenly hits the net, the shock is like a car crashing into a brick wall. The crowd screams in agony. Your heart clenches like a fist. This isn’t what you wanted. This isn’t what any of us wanted.

If you’re scared of something, you’re supposed to slowly expose yourself to it. Desensitize yourself to the source of the fear, regain control over the panic, find your footing in the flood.

(And what a treasured thing control is. I’d rather die than live without it.)

I’ve always had a love-fear relationship with horror: on the one hand, it was the only universe that acknowledged the unsafety of the world, that admitted that yes, planes crash, trains derail, people die. On the other hand, it had always terrified me, the anxious child. But it was a safe way to learn to be tense, to experiment with discomfort. I see the ones that really scare me repeatedly, opening the door just a little wider each time. It’s taken me nine years, but I’ve finally seen about seventy percent of Ju-on: The Grudge. I could only watch about ten percent the first time.

The only surefire way to guarantee control is to control the jump scare. To build your own haunted house, one where you know all the trap doors and trip wires. So it was that I ended up a horror writer, building crash test dummies that I send ricocheting into walls at unsafe speeds. My ghosts appear out of nowhere, interrupting the beam of my characters’ flashlights. Except here, there is no tightrope between knowing and not-knowing. It’s a barren plain, and I can see all the way to the horizon. I decide who wins and loses. It’s all up to me.

(I always err on the side of agony. Seems more accurate that way.)

Illness—big, serious, body-eating illness—is the greatest of all jump scares. That’s the ghost we carry, lurking under our organs, tucked behind our bones, waiting for the moment when we are softest to suddenly—bang—hit us in the face as we swing the mirror of the medicine cabinet closed. Some of us can’t tell it’s there; others can feel in our hearts that we’ve been slouching toward some shadow something that just keeps ducking out of diagnostic tests. Once it pounces, it locks you into an escalating loop of successive jump scares: waiting for the doctor to call with test results; waiting for a procedure; waiting for the meds to kick in; waiting for the end. I knew that there was something wrong with my mother before the CAT scans were run; I could tell in her repetitive mannerisms, her bouts of hysteria, her susceptibility to schemes that never would have gotten past her before. I could feel the ghost crouched inside her. I suppose she could too. But it’s amazing, how much you lie to yourself when you don’t want to see what’s coming; it’s amazing how long you can cover your eyes. Don’t Look. You Don’t Have to Look.

Except this time, I do have to look. I’m an only child; there’s no one else left. After a year of flying home every few months, willing the disease to stay under control, I moved her to an assisted living facility near me and became “her person.” Which means I have to pick up the phone when her doctors call. I have to open the letters from insurance companies. I have to check her bank account. Even though I know there’s probably a wolf waiting on the other side, I have to go to the door. Sometimes before I move the flashlight over the dark room I’ll mutter a little prayer to myself: “please don’t be bad news.” But I have to walk the tightrope anyway. And I suppose that’s what it’s like, for those characters in horror movies that go back into the house that they know by now is haunted—because there’s someone at stake who matters more than the downpour of fear.

Every time I visit my mother, I hold my breath. A series of drops, that was how one of her neurologists described the disease’s progression to me. Not a gentle slope or even a steep one—just sudden, harsh declines. Every time I ask a doctor for a prediction, like, “tell me, please, where is the jump scare?” they throw up their hands. “Impossible to predict,” they say. “With these types of diseases, you just have to go through it. You just have to . . .” 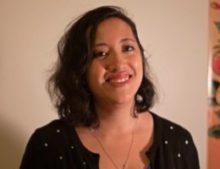 Nadia Bulkin writes scary stories about the scary world we live in, three of which have been nominated for a Shirley Jackson Award. Her stories have been included in volumes of The Year’s Best Weird Fiction and The Year’s Best Dark Fantasy and Horror, and in venues such as ChiZine, Fantasy, and The Dark. She has two political science degrees and lives in Washington, D.C. She can be found online at nadiabulkin.wordpress.com.