When John Carpenter and Debra Hill began to sketch out their ideas for Halloween, they dreamed up a list of scares. The creepiest images, the most unsettling scenes they could imagine. A clown with a knife. A gravestone in a bedroom. A pale face emerging slowly from the shadows. A person pinned to a wall by a blade.

Or—how about this one?—a woman gets into a car and finds the windshield fogged up. The wipers kick on with no effect. She reaches forward and traces her fingers along the glass and the condensation smears away. Meaning the source is inside the car. Someone is inside the car. As her eyes widen with understanding, a figure rises from the backseat.

Carpenter and Hill then arranged a narrative around these scares, spreading them out strategically, knowing that an audience needs a chance to breathe before they scream.

I’ve heard similar stories about Raiders of the Lost Ark. Steven Spielberg and George Lucas and Philip Kaufman built the story around spectacle. They sat in a room and came up with a series of adrenaline-fueled sequences, like the booby-trapped cave, the snake-infested tomb, the desert car chase. Lawrence Kasdan then had to figure out the connective tissue between all of these set pieces. Some of these spectacles—like a chase scene involving mine carts—got bumped to the sequel, Temple of Doom.

My office is papered with charts and blueprints and lists concerning projects at all stages of development—from the first germ of an idea to the final breakdown of chapters. And I have two posters in particular I study and add to often. One is called Scares. The other is called Set Pieces.

Occasionally they feed off each other. Especially when I’m writing horror. I’ll take the carefully orchestrated domino-crash of an action set piece and bind it together with a crippling moment of terror.

I’m more and more aware of their arrangement when reading horror novels and watching horror films. Let’s say there’s a general standard of seven crescendos—those spectacle-driven moments that excite and horrify more than any other—almost like spikes laid out for the audience to impale themselves upon.

Think of any favorite horror story and a few will come rushing to the fore of your mind. The spider walk in The Exorcist. The transformation scene in An American Werewolf in London. Pennywise luring Georgie toward the sewer grate in It. The hallway-stomping, door-pounding assault of Eleanor’s room in The Haunting of Hill House. No matter how brilliant the characterization, no matter how rich the themes, no matter how clever the premise, these moments are what ultimately haunt us. And often they were conceived before the story was fully realized.

I’ve come to think of them as black stars—and their arrangement as a dark constellation. As a reader or viewer, I’m constantly trying to figure out the how and why and where of them, so as to better consider their composition in my own work.

Sometimes I scratch down an idea that comes from the ether. I’ve daydreamed it while staring out the window or walking the dog. Like a body lashed to a cell tower and cooked by the radiation coming off it. Or a hollowed-out tree leading to an earthen staircase that curls downward into a series of roughly carved tunnels. Or a person with an oxygen tank willingly climbing into a coffin that will be lowered and buried in a cemetery for the night.

And sometimes I scratch down a moment that comes from my own past. Years ago, when I lived in Ames, Iowa, a college student went missing. This was February, and the police suspected he had left a bar drunk and passed out on his way home and froze to death. So there were search teams tromping through the woods and ditches. And on Iowa State University’s campus, there was a lake that divers were exploring. They had cut four or five holes through the ice, and from my vantage on a nearby hill, the white lake with the black holes looked more than a little like a skull. I couldn’t help but imagine the sunlight reaching through the holes and pillaring the black water and spotlighting a frozen body.

That same winter, I was struck by the number of crows wintering in Iowa. They would cloud the sky and make bare trees appear blackly leafed. I remember walking out of a Christmas Eve service with my family, and pausing in the frozen parking lot, because there was a strange muttering in the air, a kak-kak-kak, and when we looked up, we saw that the church was roofed in crows like something out of Hitchcock’s The Birds.

Both of these images stuck with me—and formed part of the dark constellation that became “The Cold Boy,” a short story that appears in my new collection, Suicide Woods.

And sometimes I’m so haunted by something I’ve seen or read that I’m inspired to make it my own. Like every horror nerd, I’m indebted to Frankenstein, but there’s always been one sequence in particular that fascinates me. Chapters eleven to sixteen. This is when the creature huddles up next to the cabin, peers through a chink in the logs, and observes the family that lives there. Over the course of the winter, he learns from them language and customs and love. When spring comes, he rises from his hiding place, knocks at the front door, and tries to insert himself into the family, to tell them how much they mean to him. They of course reject him in disgust and horror, recognizing him only as a monster. So that’s how he treats them in his anguish. I turned this sequence over and over in my head, and ultimately used it as a springboard for a short story called “Heart of a Bear.”

I do worry about this sort of intertextuality happening too often. Because sometimes horror can come across as too much of an echo chamber or recycling project. Maybe we can all agree that you’re no longer allowed to have the tines of a pitchfork dragged across the floor or a face appear suddenly in the mirror of a closed medicine cabinet or a creature cling to a ceiling corner over someone’s shoulder or a girl with black hair messily curtaining her face?

One of the reasons I love Stranger Things is that it punches all of my ’80s nostalgia buttons, but now that we’re in the third season, I’ve found myself growing a little tired of it, maybe because I’m constantly aware of the allusions (to E.T., Gremlins, Goonies, Stand by Me, The Thing, Aliens, whatever), which destroys the fantasy, making me cognizant instead that I’m watching a show that’s referencing other media.

It’s always more exciting—as a writer, as a reader or viewer—to come across something that feels new. Some raw ore scraped from a mine shaft we’ve never traveled down before.

But whether I’m dreaming up an image whole cloth or drawing from my own history or paying homage to another text, the biggest question is this: where does it belong in the dark constellation of whatever project I’m working on?

Usually the three highest spikes—the most electrifying crescendos—are arranged at the beginning, middle and end of a story: the inciting incident, the mid-point reversal, and the climactic summit. The others are spaced almost evenly among them to spice up and complicate the narrative (when a character dies or a totemic object is stolen or a secret is discovered).

I’m particularly fond of the term constellations as it relates to story mapping. Because a constellation is not certain or whole. There are stretches of nothing interrupting the stars you know. If you planned out your entire story before you ever sat down at the desk, it wouldn’t be much fun to write, would it? But if you instead know the general shape of the thing, you’re assured by your course while also feeling free to improvise and discover along the way.

Scaring the hell out of people for a living is good fun, but it’s also a strategic and manipulative enterprise. I’d encourage you, my fellow horror fiends, to look to the darkness and design your own fearful constellations. 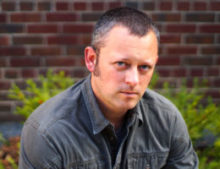 Benjamin Percy is the author of four novels—most recently, The Dark Net—three story collections—including Suicide Woods—and a book of essays titled Thrill Me that is widely taught in creative writing classrooms. His sci-fi trilogy—The Comet Cycle—will be published in 2021 by Houghton Mifflin Harcourt and has been optioned by the Russo brothers (Avengers: Endgame). He is part of the new Dawn of X-Men at Marvel and writes both Wolverine and X-Force. He has also written for DC Comics and Dynamite Entertainment and is known for his celebrated runs on Green Arrow, Teen Titans, Nightwing, and James Bond. His fiction and nonfiction have been published in Esquire (where he was a contributing editor), GQ, Time, Men’s Journal, Outside, the Wall Street Journal, the New York Times, Ellery Queen’s Mystery Magazine, Ploughshares, Tin House, McSweeney’s, and the Paris Review. He wrote two seasons of the audio drama—Wolverine—produced by Marvel and Stitcher. The first season, “Wolverine: The Long Night,” was listed as one of the top 15 podcasts of the year by Apple and won the iHeartRadio Award for Best Scripted Podcast. His other honors include the Whiting Award, an NEA fellowship, the Whiting Award, the Plimpton Prize, two Pushcart Prizes, and inclusion in Best American Short Stories, 100 Years of the Best American Short Stories, and Best American Comics.