The H Word: Body Horror—What’s Really Under Your Skin?

Years ago, while studying Buddhism in college, I came across the Tibetan practice of sky burial, where the corpse is chopped into pieces and left out in the open for the vultures. Monks gather around the remains to meditate upon death, aided by the grisly reality of a human body reduced to it essential components.

I found this fascinating. Still do. Bravo to those stalwart monks watching the vultures dip their red beaks into the human goulash. Whether it’s a spectacle I’d want to witness myself, though, is another matter.

Like sky burials, body horror in film and literature brings into the open what many of us would prefer remain unseen. Or at least not too closely scrutinized. Featuring graphic violations of the human body, this is a subgenre that’s up close and personal, arguably the most viscerally disturbing type of horror. Few feel indifferent on the subject. Most are either fascinated or repelled.

I’ve talked to a few people who find body horror gross and disgusting. What’s seen onscreen or described in print triggers a primal fear. The images may lodge in the brain like a tick, unforgettable in the worst possible way.

We like to think our corporeal selves are under our control, but body horror reminds us we’re in deep denial here. The body breathes on its own, blinks its eyes, digests food, and beats its heart without our consent or cooperation. Eventually, it ceases these activities altogether despite our frantic efforts to keep things running. Our minds, generally reliable and useful tools, can be turned to porridge by dementia, Alzheimer’s, or traumatic injury.

Body horror puts the nightmare where we fear it most—inside our own or someone else’s skin, where irrational or not, humans do have ingrained expectations. The expectation of symmetry and logical proportions, for example, the expectation that a face will have eyes and a stomach will not, that teeth will never be found inside the ears or armpits, that a tongue will not suddenly protrude from some other orifice.

And yet . . . in the world of body horror, we have to consider these possibilities.

My introduction to body horror came from Clive Barker’s Books of Blood, in particular “The Body Politic” in volume four, where a pair of hands grows tired of obeying commands and organizes a rebellion, and from Steven King’s unforgettable “Survivor Type,” which remains as vivid in my memory as if I’d been on that island with the wretched Dr. Richard Pine myself. I didn’t know body horror was an actual subgenre at the time, only that stories that focused on three bizarre and often grotesque alterations to the human body appealed to me on some dark level.

Later, of course, I discovered a host of other authors who devised inventive and ungodly changes to inflict upon the body, among them, Nancy Collins (“Freak Tent”), Brian Lumley (“Fruiting Bodies”), Edward Lee (“The Bighead”), Ramsey Campbell (“Holes for Faces”), Katherine Dunn (Geek Love), Brian Evenson (The Warren), Bentley Little (The Circle), to name just a few.

Among filmmakers, the work of legendary David Cronenberg introduced me to the visceral punch of body horror on the screen; films designed to make the viewer cringe on multiple levels, the gross-out with layers of sub-context. The Fly plays on the human fear of deformation, Shivers deals with a plague of parasites that causes its victims to become sex-mad fiends, and Rabid centers on a horde of zombies unleashed by a bloodthirsty victim of a botched cosmetic surgery.

Some onscreen body horror is so outrageous that it verges on dark humor, as when a severed head grows legs and scampers away in John Carpenter’s The Thing or when in Neil LaBute’s The Wicker Man we’re confronted with a woman lugging around a fifty pound beard of bees.

And then there’s manga artist Junji Ito’s horror manga series Uzumaki (“Spiral”), which manages to be both mesmerizing and stomach-turning as human bodies corkscrew into something resembling a cross section of a chambered Nautilus.

As hard as it may be to look, it’s even harder not to.

Like carnage on the interstate, body horror catches us in that intersection where fascination and curiosity meet revulsion. Keep reading or take a break? Close your eyes or take in every lurid detail of the desecration?

Whether on the page or on film, body horror literally exposes the body’s dreadful secrets. As we read about or watch mutilation, mutation, deformity, infestation, zombification, and the like, we’re forced to confront the reality that what we inhabit is essentially a fragile, vulnerable meat sack sheathed in skin and then gussied up in clothes.

It’s that yawning gap between our species’ aspirations to grandeur and what we really are that provides a fertile field for writers and filmmakers. The feminine, for example, provides a wealth of possibilities for body horror: menstruation, lactation, the terrors of childbirth, even suppressed female fury against a misogynistic culture as in Oliver Reed’s The Brood, where mutant rage children produced by a woman’s internalized fury carry out her bloody bidding.

Female self-mutilation gets its turn in Marina de Van’s film In My Skin, when protagonist Esther becomes intrigued by her body’s contents after accidentally gashing her leg. As her obsession with what underlies the outer packaging devolves into psychosis, Esther finds more dangerous and inventive ways to harm herself, pursuing an addictive combination of pleasure and shame. She goes past “ordinary” denial into the biological reality of her body and offers the viewer the chance to turn away or regard unflinchingly what she sees.

Body horror also toys with its more socially acceptable cousin, desire, which can lead to grotesque attempts to close the gap between one body and another via cannibalism (You’re so cute I want to eat you up) and appropriation of someone else’s body, as when Buffalo Bill crafts clothing from human skin in The Silence of the Lambs.

If the benighted Buffalo Bill soothes his inner angst by dressing up in stolen skin, most “normal” humans, in order to stay sane, dissociate the underlying terrors from our experience in day to day life, trying to ignore (until we no longer can) the reality that inhabiting a body is akin to being trapped inside a house infested with parasites, rebellious limbs, demon spawn, and all manner of spookery. It may at times look fetching on the outside, but woe to she or he who dwells within.

Love it or hate it, body horror offers the sudden, terrible eruption of the real into our lives. Whether it’s a corpse being devoured by vultures or the self-mutilating Esther in de Van’s film, it forces us to confront our own fragility and impending deaths, to be simultaneously shocked and entertained while still being reassured that the very worst hasn’t happened to us—yet. 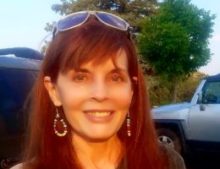 Lucy Taylor is the award-winning author of seven novels, including the Stoker Award-winning The Safety of Unknown Cities, six collections, and over a hundred short stories. Her work has been translated into French, Spanish, Italian, Russian, German, and Chinese.

Her short story “Wingless Beasts” is included in Ellen Datlow’s The Best of the Best Horror of the Year, to be published in late 2018.

Lost Eye Films, a UK-based, independent production company, has purchased the rights for a film version of “In the Cave of the Delicate Singers” (Tor.com).