The H Word: Arnold Is a Survivor Girl

Why Predator Is a Slasher Movie

The standard formula for a slasher movie is to find something the culture takes for granted, and then have a killer rampage through it. The iconic slashers find something we rely on and take it away from us. John Carpenter’s Halloween (1978) is about the idyllic suburbs and holiday festivities becoming a playground for a masked killer. Friday the 13th (1980) effectively ruined camping for a generation by putting a dangerous stranger in the woods. A Nightmare on Elm Street (1984) claws its way into the safety of our dreams.

Predator (1987) doesn’t feel like most slashers. That’s because the safe thing it targets is different. Rather than a suburb or a vacation resort, Predator targets the American male power fantasy.

Audiences watched ’80s action movies to see indestructible men win. The narrative of muscular men with the biggest weapons and the most experience with bloodshed was just as entrenched in cinema in the 80s as wholesome babysitters and days at the beach. You were guaranteed not just their survival, but their dominance and their triumph. That’s why they were the perfect prey for a slasher.

Predator’s cast looks like the most unlikely prey. Arnold Schwarzenegger (as “Dutch”) blows up enemy buildings and stops a car with his bare hands. When Dutch reunites with his old best friend, they flex into the most preposterously masculine handshake of all time. Gradually you realize action movies and slashers share a fondness for stereotypes. Dutch’s team is full of jocks and ex-soldiers with superficial personalities: the quiet one, the clean-cut one, and even the obvious jerk that the audience hopes dies first (although this mean girl is played by Jesse Ventura).

I remember as a kid in the ’80s feeling so weird when all the boys who’d rooted for Jason, Freddy, and Myers suddenly rooted against the Predator. I thought rooting for the killer is what you were supposed to do. But in Predator, my fellow boys saw their role models endangered in the slasher context.

Predator isn’t the only slasher movie featuring male protagonists. Child’s Play (1988) is about a boy and his beloved toy, and multiple Friday the 13th movies followed Tommy Lee Jarvis. What differed was that Predator looked directly at what young men were supposed to want to be. As a boy, I definitely internalized the harmful message that I had to become proficient at insult and harm, and that if I did, I could never be harmed. It was a lie of an invincible masculinity. My friends and I hadn’t expected Horror to attack that cultural value. But it does, and it rips its damned head off for a trophy.

The monster hunts supermen through that jungle, unimpressed with their bowie knives and machine guns. It brings better toys, and from kill to kill, we learn how it operates. That invisibility power. A blade disc that zipped back to it like a boomerang. A shoulder cannon. It is the classic slasher discovery arc, teaching us the killer’s M.O. and personality at the expense of disposable lives. The Predator is like Jason Voorhees with a more expensive mask.

As the bodies pile up, it’s clear that toxic masculinity can’t save anybody. It doesn’t work.

You know what works?

Three years before Predator came out, A Nightmare on Elm Street ended with our heroine Nancy knowing she was in over her head. She read up on home defense and turned her ideal suburban home into a death trap. It was already a death trap for her—Freddy Kruger could invade whenever he wanted—but now it could also hurt the killer.

In Predator, Dutch ends up the last action hero alive. This space is home turf for Dutch, who has illegally invaded plenty of places for America before. Now the sanctity of his violence has been violated. He covers himself in mud to camouflage from the killer’s spectral vision. He fills the jungle with traps so that it will be as dangerous for the Predator as it already is for himself. Just like Nancy, Dutch’s only chance of survival is to invite the monster in.

Some guy is yelling right now that Arnold isn’t a Survivor Girl because he beats up the Predator.

All of Dutch’s tricks barely slow the Predator down. Dutch has to fistfight the monster, and the monster literally slaps him around. Their battle is a joke. Dutch ends the movie panting, lying on the ground, terrified that his traps won’t stop this thing.

Then the Predator interrupts him with some all-time great maniacal laughter.

Oh, why is it laughing?

It just armed a bomb.

The explosion is so enormous that Dutch spends what should be his triumph running for his life. For the entire movie, the Predator took trophies from the bodies of Dutch’s friends. Dutch doesn’t slay the monster, and he doesn’t get a trophy. All he gets is to be flown away on a chopper, to some place where others can take care of his trauma.

Calling this emasculation is too reductive. Dutch is dehumanized and exhausted until he is a husk. This fate isn’t intrinsically gendered—but it’s how most Survivor Girls end their stories. If it feels gendered, it’s because this fate is usually reserved for women.

What makes the ending seem emasculating is that Dutch’s male power fantasy is torn away from him. It doesn’t protect anyone. It isn’t useful. No matter how many steroids he takes, he winds up the thing America tells boys they can’t grow up to become: a victim.

That’s why Predator’s anticlimax works so well. Usually, Jason Voorhees jumping out of the water is a final scare, violating the old school safety of the epilogue. Here, the killer doesn’t have to come back. It’s more haunting that it died of its own volition after it took everything away from the men it toyed with.

Most slashers revel in the emptiness and meaninglessness of their violence. The killers seldom have reasonable motivations. Laurie Strode and her friends in John Carpenter’s Halloween are babysitters who haven’t harmed anyone. The woman who goes skinnydipping at the beginning of Jaws (1975) is just having fun partying until the shark attacks. In order to fill the void of meaninglessness in slashers, critics project Puritanical intent onto filmmakers.

What struck me as a boy among boys is that the Predator’s victims were different. They quipped and cashed checks to ruin lives. They ran around foreign countries doing harm, sometimes not even knowing the goals of their missions. This slasher killer did to the heroes what the heroes did to everyone else. 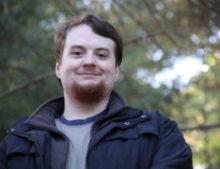 John (@Wiswell) is a disabled writer who lives where New York keeps all its trees. His fiction has appeared in Uncanny Magazine, Fireside Magazine, and Pseudopod. Horror has scared the will to live into him on many nights, so he writes to pay back the debt.