The “Gotcha” and the “Sorry, I Don’t Gotcha”

In the Tall Grass
Written and directed by Vincenzo Natali
Produced by Copperheart Entertainment and Netflix
October 4, 2019

The minimal requirement that every story must have or die is the “gotcha,” a reason to keep reading beyond the current sentence, to the next one, and the one beyond that. It doesn’t necessarily have to be high-concept, honestly. For your friend the reviewer, the “gotcha” of Larry McMurty’s Lonesome Dove was Gus coming out onto the porch and saying a few words to the pigs.

The gotcha must be present throughout and renewed throughout. But the opposite of the story powered by the “gotcha” is the story that begins with us squarely in its corner that gradually jettisons any reason we might have to care.

Alas, that is what happens in a recent movie based on work by two guys who, as storytellers, usually demonstrate the “gotcha” gene as a dominant trait.

Stephen King and Joe Hill collaborated on the novella “In the Tall Grass,” which, in the first submission of this column, your humble correspondent trumpeted right away that he had not read. The story became an October Netflix movie also called In the Tall Grass, with a level of faithfulness to the source unknown and therefore not taken into account by yours truly. It was written and directed by Vincenzo Natali and starred, among others, Patrick Wilson, Laysla de Olivera, and Avery Whitted.

Becky deMuth (Olivera) is a young pregnant woman being driven cross-country by her protective, and we will eventually learn, possibly overprotective brother Cal (Whitted). They stop on a rural highway so that the queasy Becky can throw up, as is the traditional prerogative of the expecting.

While they are there, they hear a young boy crying for help from a field of tall grass, saying that he cannot find his way out. It is likely true that, were this not a horror movie, but a real-life situation we were personally involved in, we would see no immediate problem with doing what this pair does, head into the tall grass themselves, both of them, to find the boy. It is, however, fully expected within the genre that they both get lost in that environment themselves, victims of a malevolent force inside that grass that makes their senses of direction, and their ability to determine the proximity of other voices audible in the field, completely unreliable. There was a great moment, the film’s best, when Becky leaps up to clear the top of the grass and find the nearby church steeple that is the most visible local landmark; but she leaps twice in rapid succession, the second jump establishes a location much farther away than the first, and confirms that whatever rules this place has no intention of allowing her and her brother to escape. It wants them stuck where they are, and so they are tormented by an ordeal that includes thirst, despair, hallucinations, distortions of time and space, and the possessed madness of those also imprisoned in the grass with them.

(It is here that I make the unrelated observation that Joe Hill has complained on Twitter that the movie was almost ready to come out when he was struck by the brainstorm that he and his father-collaborator should have called their original story “Lawn of the Dead.” I make no further comment based on this, but I could not escape this column without mentioning it. I, too, have experienced the title-selection wisdom of the stairwell, and by Jove, it hurts.)

The intensity of the situation and the terrors of the physical space are extremely well realized in the film’s early stretches, and throughout. But they become less effective as the story marches on, largely because this ocean of tall grass is a place where a person can be found dead and later, discovered alive; where, due to time anomalies, people who arrived later can be the source of the voices that lured in those who arrived before them. Several eminently final things, including deaths, happen that turn out to be not so final, and while some of this is creepy in the extreme, it’s a bell that keeps ringing, and the dark miracles in question fall prey to the law of diminished expectations.

I note that this is a common flaw in haunted house stories that go too far over the top (including, earlier, the King-based haunted-hotel film 1408 (2007), the awful remake of The Haunting (1999), and for that matter in many special effects-driven films where the internal physics have been allowed to default to the random): to wit, the more a narrative keeps ringing the bell that anything can happen, the less and less it matters that anything at all happens. The profoundly chilly first hour becomes the sound of air escaping a punctured tire. You begin to notice things like the dog making it out okay, a development that is spotted from a distance, and conclude, “Okay, that only happened because somebody said it might as well.” And from there it’s just a small leap to the awareness that the fates of these people, in a couple of cases honestly likeable people in whose fates we were previously invested, will be equally arbitrary, whether the result turns out to be escape or further damnation. The logic is entirely subject to whatever physics keep the story going for another five minutes. Hell, one frisson depends entirely on a dark epiphany about Cal, but that development is subsequently erased, and is afterward forgotten, so the question becomes: So why did you bring it up, then?

I note I say this at a historical moment when both King and Hill have new books out, as happens to be likely at any random date you happen to pick. Your humble correspondent, devoted to the work of both, is eager to devour them, a reason he was also profoundly in the film’s corner from minute one. But if you sacrifice my motivation to care, you cannot get it back. And that is what happened here. 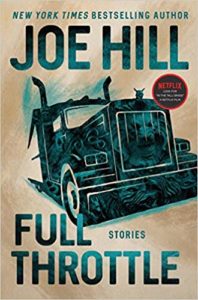 Following the submission of the above commentary, the honchos at Nightmare sent me Hill’s new collection, Full Throttle (Harper Collins, $27.99), specifically because the original story is reprinted there, and could provide your humble servant an opportunity to compare. The story works better, in large part because of the standard advantage of prose over film, the ability to get within a character’s point of view—but also because it happens to possess one clear set of rules for its supernatural deathtrap, that do not shift and are not violated at any point. Characters do not die and come back, and there is no de facto time looping. The epiphany regarding Cal is alluded to, but is largely the unfair implication of someone who hates him. There is less repetition and therefore less to strain the patience. The story ends without a break in the horror, and the movie contrives a means to erase it for at least some of the characters, but though all other things being equal your humble servant generally prefers the hopeful ending to the futile one, the prose story is better. Honestly, the story is better.

It is not the best story in the book, which I have not yet completed and will not be reviewing in toto here, but I can point out one better, already known to me: “Throttle,” another collaboration between King and Hill, that pits a motorcycle club against the demonic trucker from Richard Matheson’s classic story “Duel.” (It appeared in a Matheson tribute anthology.)

I need to add the personal note that Hill’s introduction includes a few heartfelt paragraphs about fathers, and in specific, the difference between fathers who are best run from, and thereafter treated as object lessons as how not to behave; and fathers who remain welcome presences in the lives of their children, and role models. We clearly know where Joe Hill stands. He wears it on his sleeve. But I want it publicly known that these few heartfelt paragraphs struck the solar plexus of this reviewer who lost his own Dad one year ago. Gulp, and dang. Ditto, guy.