The H Word: The Things that Walk Behind the Rows

Two years ago I moved to a rural town of 8,000 people, twenty miles from the border between Kansas and Missouri. It’s the kind of place most people only pass by on the way to someplace else. Unless you live here, the most you’ll ever see of it is the truck stop by the freeway, where you might stop to fill up your gas tank and take a leak. It’s the last outpost of civilization you’ll see for a while.

Twenty minutes or so outside of town, there’s a long stretch of highway where cell phones don’t work. We drive it often, and I still haven’t quite accepted the concept of this dead zone, a place the powerful and sometimes overpowering connectedness of modern life can’t reach.

Of course, it didn’t take me long to imagine the obvious nightmare. We break down on the side of the road, just here. We can’t call for help. We’re left at the mercy of passing motorists, standing in the biting cold. (Of course it would be a frigid Midwestern winter at a time like this, subzero winds raging towards us across the fields, always from the west.) Until someone finally stops. He seems friendly. He offers a ride. What’s that, rustling and writhing under the pile of blankets in the back of his van? Nothing, he says, don’t you worry about that.

I think you know where this story goes.

It feels so contrived. An endless stretch of nothingness where communication stops. The twenty-first century horror story usually demands a more elaborate explanation; protagonists must be stranded on forested mountaintops, or demonstrate shocking negligence toward their phone batteries. But here on the prairies, in the empty space that seems like it’s only here to fill up the gaps between everything else, isolation is simply a fact of life.

Isolation that can kill.

Horror is often inextricably linked to a sense of place. Its hauntings are site-specific, its nightmares generated by the unique gestalt of historic trauma, atrocity and grief that collects in the architecture and the earth.

When I think of a horror native to the country’s Northeast I think of drafty, rambling Victorian mansions where ghosts have lingered for centuries, growing increasingly bitter and deranged; I think of very old graveyards and long-dry wells and the scabbed over hillocks where witches were burned. I think of a place founded on Puritan cruelty, built by colonists who imported their old world fears and superstitions and ghosts.

When I think of a horror that could only exist in the American South, I think of plantations, crumbling monuments to antebellum monsters, the immeasurable debt and permanent guilt of a society built through the trauma of a people who were kidnapped and enslaved. I think of swamp country, monsters that thrive in the gloom and dim, abusing their prey, evading daylight.

But the Midwest: It took me a while to imagine the horrors it holds. Perhaps it’s the façade of wholesome banality. Perhaps because I still feel like a fascinated stranger in this place. Perhaps because the atrocities that lurk in its history have not been so thoroughly documented.

But then, I thought, it’s this: Isolation that can kill.

When the first white settlers reached this part of the country, they suffered from a heretofore unknown malady they called Prairie Madness, a depression or malaise or insanity that could become debilitating. Was it caused by the incessant howling of the winds across the plains, the choking loneliness for family and friends back East, the flat formlessness of the landscape, the sudden irrelevance they felt beneath the boundless sky? Maybe the unfamiliar terror—after a life spent in cramped, tumultuous towns—of knowing they could call as loud as they could, and no one would come? This place was like space, like the void between the stars, and no one could hear you scream.

America made it that way on purpose. The Homestead Act of 1862 granted 160 acres to any settler that could hold the land. Their farmhouses were miniature fiefdoms, miles apart. Who knows what went on in those places; unseen, unreported? Who knows what husbands do to their wives and parents do to their children when they know the neighbors will never hear?

Midwesterners have perfected the art of minding their own business. Even now they like that space, they prefer to keep their opinions to themselves, their deepest feelings go unexpressed. They seem to find their own faults and failings more shameful than they really should. Are they all as hauntingly lonely as I am here? Does everyone else, surrounded by these friendly faces that never show what they actually think, feel as deeply isolated? I don’t know. No one tells me.

The cornfield is key to the best-known work of Midwestern horror: Stephen King’s “Children of the Corn.” Its enigmatic acres hide a monster (“He Who Walks Behind the Rows”). Its expanse allows the religious fervor and frenzied violence to continue unchecked, undetected. The next town over minds its own business. They sense there’s some weird shit going down in Gatlin, but that’s not their problem; just look at all the emptiness between here and there.

These same horrors unite in Jerome Bixby’s classic short story “It’s a Good Life,” about a child who can control the world with his mind and torture with his thoughts. There’s a town cut off; it’s either banished to permanent isolation in a pocket universe, or it’s the only place left. To its residents, it makes no difference either way. “Peaksville was just someplace. Someplace away from the world.” A place where communication is impossible, because to speak the wrong thing, to think the wrong thing, can result in a hideous punishment. A community where smiling to hide your pain and calling things “good” is the only way to survive. And of course, a cornfield, where this petulant child-god sends the unlucky creatures that displease him. He thinks them into deep, deep graves.

John Darnielle’s recent novel, Universal Harvester, is inextricable from its setting in the Midwest; a small town much like mine, the middle of nowhere, Illinois. The book isn’t horror, exactly; if it is, it’s the quietest, most slow-burning kind. It’s more like a weird novel that could be horror if it took a different turn somewhere in the middle. And of course, there are cornfields:

“There are other times when people go into the fields and yell different things: ‘Help!’ for example, often repeatedly with increasing volume, or ‘Where are you taking me?’ But nobody usually hears them. A few rows of corn will muffle the human voice so effectively that, even a few insignificant rows away, all is silence, what to speak of out at the highway’s shoulder: all the way back there, already fading into memory now.”

The cornfield casts its hush on us all. It’s a good place to hide, and an excellent place for an unmarked grave. Who knows how much blood has soaked these rows?

The cornfield is a wall, a moat, a maze. It doesn’t protect us from each other; it only protects us from witnessing the evils we’d rather not see. But those evils lurk here as powerfully as ever, nurtured in the silence, bred by an isolation that can kill. 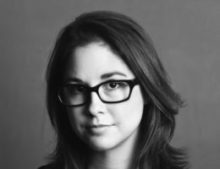 Desirina Boskovich’s short fiction has been published in Clarkesworld, Lightspeed, Nightmare, Kaleidotrope, Fantasy & Science Fiction, PodCastle, Drabblecast, and anthologies such as The Apocalypse Triptych, What the #@&% Is That? and 2084. Her debut novella, Never Now Always, was published in 2017 by Broken Eye Books. She is also the editor of It Came From the North: An Anthology of Finnish Speculative Fiction (Cheeky Frawg, 2013), and together with Jeff VanderMeer, co-author of The Steampunk User’s Manual (Abrams Image, 2014). Her next project is a collaboration with Jason Heller — Starships & Sorcerers: The Secret History of Science Fiction, forthcoming from Abrams Image. Find her online at www.desirinaboskovich.com.