The H Word: Horror and Halloween

Steve Schlozman, a psychiatry professor (known as “the zombie doc” for his Zombie Autopsies: Secret Notebooks from the Apocalypse), did an experiment to try to understand exactly why people enjoy horror, neurologically. He showed them a picture of a puppy. Then he showed them the image with cat’s eyes Photoshopped onto the puppy. It changed everything, he says. Two recognizable patterns that don’t belong in the same picture freaks people out. This is what horror, and Halloween to some extent, can do that’s so appealing—upend the world order and make us work to put it back together. Help us find where the edges are.

Halloween—old Halloween of folklore, I mean—was tied to the quickening dark, to seasonal change, to death, to the movement of mythical beings (fairies, witches, dead souls) through the night. These facets, too, are the playing fields of horror in film, art, and literature. You’d think Halloween and horror would have made perfect bedfellows from the beginning. But the Halloween we know now has been invented and reinvented many times over the past few hundred years. It’s always been spooky and otherworldly, but until fairly recently, it had little to do with horror.

It began slowly. 1930s and ’40s radio shows such as “Inner Sanctum” and “Lights Out” had Halloween offerings, and comics issued creepy tales at Halloween to satisfy young and hungry-for-scares kids like the young Steven Spielberg and Stephen King. In literature, there were only a few mentions of the holiday until well into the second half of the twentieth-century. One of the most collected pieces in early Halloween-themed books (say, 1919 on) was Poe’s “Black Cat,” a short story that doesn’t mention the holiday at all. Charles Williams’s All Hallow’s Eve (1945), the first fantasy/horror novel to use those words in a title, seems to be more about the church’s All Hallows (All Saint’s) than our Halloween. Poe and Lovecraft each gave Halloween enough thought for a poem: “Ulalume” (1847) for Poe; “Halloween in a Suburb” (1926) for Lovecraft.

Even in movies, Halloween and horror were on different tracks: Compare Two Thousand Maniacs (1964), one of a trilogy of splatter films by Herschell Gordon Lewis, or Polanski’s Rosemary’s Baby (1968), about satanic cults and madness, with the decade’s iconic Halloween movie: It’s the Great Pumpkin, Charlie Brown (1966). Halloween wasn’t mined for horror because, up until around forty years ago, it was still seen as a children’s holiday.

Then things began to shift. A glut of violent horror films unleashed by the end of the Hollywood production code in 1964, plus real-life horror—graphic images from the war in Vietnam for one—meant that America had to cope with a darker set of images, a more visually dangerous world. Halloween, which always responds to cultural movements, became riddled with rumors about poisoned treats, satanic rituals, kidnapped kids, and strangled black cats. Hoaxes or misunderstandings, most of them, but the celebration of Halloween was transformed by the notion that kids were in danger.

It wasn’t all bad news. For those who love horror—and it turns out there are quite a few of us—the uptick in bloody visuals in popular culture helped create a new market for Halloween terrortainment.

I asked my friends this: if you draw a circle around horror, and one around Halloween, where do they overlap? My most literal friend mentioned the letter “O.” But the majority said haunted houses, October-only dark entertainments that thirty-one million Americans sought out last year.

Charity haunts grew popular in the 1970s, along with the first October horror-themed theme park attractions. These dark entertainments and horror films use the same characters and scenarios (hillbilly cannibals, chainsaws, clowns, butcher shops). They’re also both narrative, which gives us a way to hook into what’s happened and find a place for it in our heads, savor it. And why not? If adults who grew up in the ’50s and ’60s have preserved trick or treating so their children can enjoy Halloween, those who grew up in the ’70s with heavy metal, slasher movies, and the fear of razor blades in their apples might feel a bit of nostalgia for a more terrifying Halloween. We want an experience that rises above the visual chatter that surrounds us.

Both horror film and dark entertainment create tribes. In movies we watch people drawn together to fight for or against something. In haunts, there’s group terror—people come together as bands of warriors for the experience. As my haunt-owner friends say, no one goes to a haunted house alone.

It was a fluke, though, that nailed horror to Halloween forever. John Carpenter’s Halloween (1978) was supposed to be released as The Babysitter Murders, but producer Irwin Yablans changed the title, and, with one stroke, Halloween (the movie) tied Halloween (the holiday) to violent death and unimaginable evil because it used the holiday as a title, theme, and setting.

The original trailer went like this: medium shot of a smiling jack-o’-lantern next to bold letters spelling “Halloween.” Midway through is a shot of the same jack-o’-lantern, grinning on a nightstand next to a bed where a splayed body lies murdered. The final image is the jack-o’-lantern, the boldface “Halloween,” and that creepy, 5/4-time theme music that gets under your skin.

Halloween took the most innocuous of symbols, the most childlike and innocent—a pumpkin—and subverted it. Was anything safe anymore? Halloween played on the same fear that the myth of the razor-blades-in-apples did—something evil is lurking under the ordinary.

The enormous box office success of Halloween let loose a flood of 1980s slasher films, many with references to Halloween, the dead returning, Satan, and even Samhain, Halloween’s Old World predecessor. To complicate things further, practitioners of modern day witchcraft—an earth-based spirituality—spoke out about their own celebration of October 31st, and fundamentalist churches began to rail against its “Satanist” origins. The American public was confused: Where did all this evil come from? When did Halloween become so bloody?

It’s not the celebration of Halloween that’s violent, menacing, morally ambiguous, or evil. We are. We’ve always been fascinated by gore: Marie Antoinette’s head rolling into a basket, the Zapruder film of Kennedy’s assassination, photos of Nicole Simpson’s bloody neck. We rarely look away. Halloween, dark fiction, horror film, they all sift through our terrors and taboos and hand them back to us as entertainment or art.

Horror films infused the celebration of Halloween with a more extreme visual palette, which bolstered the haunt industry (which has really caught fire in recent years; haunt owners say there are somewhere between 3,000 and 5,000 attractions in America today). Horror also brought teenagers and young adults back to the celebration of Halloween. (And we’re not just talking boys here—the majority of horror movie audiences are women, and haunts report that their patrons are split fifty-fifty.) Halloween, in turn, legitimized horror, nudging the genre from subculture to mainstream. It’s okay to stock your local Walgreens with corpses and bloody axes in October (or September, or even August) because Halloween is a fun American holiday. And Halloween also appears more in contemporary horror literature. Now that we’ve unearthed Halloween’s darker side, horror writers, visual artists, and filmmakers have plumbed its imagery—ancient and modern—for theme, plot, or atmosphere. (I’m thinking about the groundbreaking 2000 publication of October Dreams with its collection of Halloween-centric horror by Peter Straub, Poppy Z. Brite, Dean Koontz, and so many others.)

There’s more horror in Halloween now, and more Halloween in horror. They overlap, intersect, and feed off each other, not just because they come from the same root, but because they respond to the same human curiosities. The boundary between the world we live in and the underground realm of rot and madness is thin and brittle; what makes Halloween and horror so enthralling is that they let us travel back and forth to the land of the dead, the unknown, and the mind-bendingly awful, without consequence. We make it out alive. 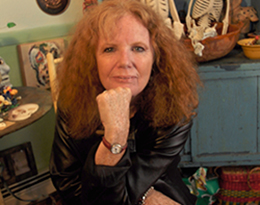 Lesley Bannatyne is an author with five books on Halloween (covering its history, an anthology of Halloween literature, a children’s story, a how-to, and her most recent, Halloween Nation. Behind the Scenes of America’s Fright Night). She is also a freelance journalist, covering stories ranging from local druids to relief aid in Bolivia. Bannatyne has shared her knowledge on television specials for Nickelodeon and the History Channel (“The Haunted History of Halloween,” “The Real Story of Halloween”), with Time Magazine, Slate, National Geographic, and contributed the Halloween article to World Book Encyclopedia.