It’s likely you already know the scenarios by heart. Anyone who’s even remotely familiar with James M. Cain, Dashiell Hammett, or Raymond Chandler would. A cynical, world-weary private eye is visited by a mysterious client (female, more often than not) and winds up taking a case that finally shakes up his life enough to make him feel something—only to inevitably remind him why he always felt safer not feeling anything at all.

A down on his luck boxer is paid to throw a fight. An insurance salesman is lured into a murder plot. A two-bit criminal gets in over his head. An innocent man is framed for a crime he didn’t commit. These are the states of affairs of noir fiction, stripped down, admittedly, to their best-known and most recognizable shapes. However, noir is actually far more capacious than our memories of Sam Spade or Walter Huff. It holds more than detectives, criminals, and conmen. It holds monsters, too, and terrors both supernatural and psychological. Its bleak cosmic outlook makes noir and horror go together like Nick and Nora Charles, the married sleuths from Hammett’s The Thin Man. For this reason, the horror-noir hybrid has been with us for a long, long time.

At its essence, noir is no more a true genre than horror is. Both rely on tone, rather than trappings or plot developments, to earn their labels. And yet, like horror, noir is recognized as a genre of sorts thanks to colloquial usage, a buzzword meant to provide a shorthand definition. Unfortunately, as with horror, it’s very hard to define noir in concrete terms. The closest one might come is to say that the signposts are a pervasive cynical outlook (either authorial or belonging to the protagonist) coupled with a gritty, squalid, usually urban setting. The feel of it is relentlessly dark—hence the name, the French word for black—and rarely does the narrative step out of the metaphorical shadows of society’s underbelly. Noir is the domain of lowlifes, the dregs of humanity, the bottom of society’s food chain. It’s also the territory of characters who don’t—or who choose not to—fit in. Characters who can see through society’s civilized mask to the festering heart of greed, selfishness, and corruption beneath. Clive Barker once wrote, “Any story worth telling is a maze of hidden meanings,” and noir proves itself especially adept at revealing what lies hidden. It shows us the human condition from the point of view of the outsider, and it doesn’t like what it sees.

Some of the best horror does the same thing. Consider the works of Poe, who saw nothing but the inevitability of death and decay in all human relationships. Or Lovecraft, who watched the frantic hubbub of our daily lives with the icy gaze of a disinterested spectator and told us nothing we did mattered. (“Life is a hideous thing,” Lovecraft wrote as the very first line of “Facts Concerning the Late Arthur Jermyn and His Family,” and if that’s not a noir sentiment, I don’t know what is.) In Shelley’s Frankenstein, the creature is the ultimate outsider. Everywhere he goes he is greeted with only hatred and fear, until finally he accepts this as the true dark, seething heart beneath society’s friendly façade. Once he embraces it by murdering Victor Frankenstein’s brother William, friend Henry Clerval, and wife Elizabeth, the creature becomes the very monster everyone thought him to be, and thus becomes an equal at last.

This shared tone of darkness and pessimism makes the horror-noir hybrid inevitable. And why shouldn’t it be? The two fit together like perfect puzzle pieces. But I believe the overlap between them goes beyond tone. Most noir stories involve crime in one form or another, with the protagonist frequently being a hardboiled detective, either professional or amateur, trying to solve the central mystery. I would argue that at the heart of most horror stories, too, is a mystery waiting to be solved. Why is Belasco House regarded as the most haunted house in the world in Richard Matheson’s Hell House? What drives Daniel Upton to put six bullets through the head of his best friend Edward Derby in Lovecraft’s “The Thing on the Doorstep”? Who—or what—is targeting the members of the Chowder Society by making their worst fears come to life in Peter Straub’s Ghost Story?

Some of the best authors of horror and dark fantasy have been utilizing noir for decades now. William Hjortsberg’s famous novel Falling Angel dates back to 1978 (and was adapted into the movie Angel Heart in 1987). It features a hardboiled private investigator, Harry Angel, who takes on a missing person case that turns into a phantasmagoria of ritual murders, voodoo, and Satanism. Peter Straub’s novels Koko and The Throat take a number of noir tropes—murder, amateur detectives, and a colossal distrust of the supposed rules of a civilized society—and mix them with a strong dose of psychological horror. Tanya Huff’s Blood Books series follows Canadian cop turned P.I. Vicki Nelson, who stands against supernatural threats with the help of her vampire partner, Henry Fitzroy. Clive Barker’s private detective, Harry D’Amour, appears in several of his horror and dark fantasy works, including the story “The Last Illusion” and the novels The Great and Secret Show and Everville. Jim Butcher’s bestselling dark fantasy series The Dresden Files focuses on a Chicago P.I. named Harry Dresden who also happens to be able to work magic. (By the way, you could write a thesis on all the P.I.s who are named Harry.)

More recently, noir sensibility can be found in the oeuvre of Laird Barron, whose horror stories often feature cynical bruisers undone by a bleak and unforgiving cosmos. Ian Rogers’s Felix Renn stories follow a tough-talking but emotionally fragile P.I. through an alternate Toronto where the supernatural makes regular incursions. Although the Renn stories have a more humorous than pervasively dark tone, Rogers plays admirably with noir tropes to his own ends. Tom Piccirilli is another fine author who’s been mixing noir and horror his entire career, in novels like Headstone City and The Dead Letters.

Some readers are reluctant to read fiction that mixes genres—a stance I’ll readily admit to never understanding—but horror and noir are so similar they could be sisters. The horror-noir hybrid, therefore, is less a mix of genres than a natural expansion of tone. Because Lovecraft isn’t the only author who posited an indifferent, hostile cosmos where the concerns of humanity mean nothing. Mickey Spillane did, too. If part of you is wondering right now what a collaboration between them might have been like and lamenting the lost opportunity to find out, fear not. Try any of the authors or works I mentioned. Peel back the false façade of what we believe to be civilized society and witness the dark horrors that await you there. 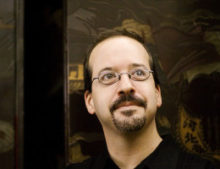 Nicholas Kaufmann is the Bram Stoker Award-nominated, Thriller Award-nominated, and Shirley Jackson Award-nominated author of General Slocum’s Gold, Chasing the Dragon, Dying is My Business, and Die and Stay Dead. In addition to his own original work, he has also written for such properties as Zombies Vs. Robots and The Rocketeer. He wrote the monthly horror and dark fantasy columns for Fear Zone and The Internet Review of Science Fiction before both websites went the way of the dodo. He and his wife live in Brooklyn, NY, but you can visit him online at www.nicholaskaufmann.com.