The H Word: The Empty Bed

One of the most disturbing moments in any horror film I can think of is in David Lynch’s Twin Peaks: Fire Walk With Me, a movie everyone hates but me (the Cannes audience booed it at its premiere, but what do they know about anything). Taken by itself, it’s not just an overlooked gem about the final tragic days of a young woman, but one of the most terrifying films of the 1990s. Stripped of the series’ quirky fun, it’s a straight shot down nightmare alley, where every facet of Smalltown America wholesomeness is rotten and festering with darkness. At one point, the mysterious Mrs. Tremond gives Laura Palmer a framed photograph of an open doorway (“This would look nice on your wall,” she tells Laura). The night Laura receives the photograph, she has a strange dream in which she enters the door in the photo. At one point during this sequence, Laura appears to wake up; lying in bed, she turns to her left and sees, lying beside her in bed, a bloodied girl named Annie (played by Heather Graham, Annie appeared late in the series and didn’t know Laura Palmer in life). Annie gives Laura some fairly nonsensical information, and Laura smiles serenely, nodding. There is a battered girl in my bed I’ve never seen before, and this is all fine, this is fine, no problem here. Laura turns away, and then looks back, and Annie is gone. And that is when Laura truly freaks out.

Up until this moment, Laura has seen and endured far, far worse, but it’s this moment, when she gasps at the empty bed, that remains, for my money, one of the film’s most unnerving moments. And that’s in large part because a moment earlier she took in stride the aberrant presence of a bloodied woman lying next to her. It’s this juxtaposition of reactions—bloodied strange woman suddenly lying beside you is totally normal, but her disappearance is terrifying—that captures so well for me the dream logic of nightmares. Rarely do my nightmares involve some visible threat or danger; rather, my mind seems to occasionally mix up the terrifying with the banal, and it’s in encountering them out of order that is most unsettling.

A particularly memorable nightmare I had a few years ago involved coming home to a dark house and realizing—in that way of dreams, I just knew—that someone was in the house: not with a knife or a gun, but in the bathroom taking a shower. The presence of someone inside the house was scary, but somehow the innocuousness of the showering made it even more unsettling. But I’ve had other dreams where objectively far more disturbing things have happened—loved ones’ faces distorting and melting like the bad guy at the end of Raiders of the Lost Ark—and my subconscious has responded with a more or less indifferent shrug.

Lynchian horror is predicated on the idea that lurking beneath our cute, suburban exteriors is some strange malevolence. It runs through all his great works, but it’s more complicated than it first appears. His best moments are predicated on the idea that both the normal is terrifying, and the horrific is comforting. A diner on Sunset Boulevard may be a scene of a deadly nightmare, but a baby that looks like a shrink-wrapped deer fetus is accepted as a more or less normal kinda situation.

Few writers or filmmakers tap into this as successfully as David Lynch, maybe because of the way he upends the usual horror script. The standard horror formula is to start out with the banal, ordinary life: a nice suburban home, a happy family, maybe some teenagers having a fun weekend at the lake. Then the monster arrives, and we realize that everything we thought was safe and normal was just an illusion, that the nightmare was always lurking underneath. The heroes do battle and/or get eaten by the monster, but sooner or later it’s defeated, and at the story’s end, we’ve returned back to the normal, everyday world.

But such narratives, even when they’re done well, often leave me unsatisfied. Once the veil has been pulled back, you can’t really ever go back to the way things were, no matter how hard you try. The terrible knowledge that’s brought you to this place can’t fail to change you, and even if you defeat the monster, you’re still left with your memories.

With Lynch’s work—along with a few other of my favorites, including Franz Kafka and David Cronenberg—there’s no going back, even after everything is over. And so the greatest moments of terror often come from the most banal of places: places that might otherwise seem to offer safe harbor from the nightmare. It’s often the openly terrifying things, by contrast, that are accepted with equanimity. Perhaps this is because once that exterior is peeled back, the scary things are at least no longer unknown. What the doomed protagonists of David Lynch’s films gradually understand is that you can never turn your back on something that presents itself as safe, reassuring, and unthreatening. With a nightmare, at least you know where you stand. 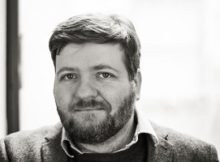 Colin Dickey grew up in San Jose, California, a few miles from the Winchester Mystery House, the most haunted house in America. As a writer, speaker, and academic, he has made a career out of collecting unusual objects and hidden histories all over the country. He’s a regular contributor to the LA Review of Books and Lapham’s Quarterly, and is the co-editor (with Joanna Ebenstein) of The Morbid Anatomy Anthology. He is also a member of the Order of the Good Death, a collective of artists, writers, and death industry professionals interested in improving the Western world’s relationship with mortality. With a PhD in comparative literature from the University of Southern California, he is an associate professor of creative writing at National University.