Being from Calgary myself, it didn’t surprise me to learn that you’re also Canadian, as your description of cold and mountains rang so true (not to say that other places don’t have cold and mountains). Were you in the mountains when you wrote this story?

How wonderful being interviewed by someone who’s experienced a Calgary winter! Interestingly, I’d just talked to my mother about the difference between Manitoba and Alberta snow. I haven’t spent a winter in Manitoba since I was seven, but I remember the snow as being bluer and with a more crystalline and sparkly quality. My mum agreed that it was, and wondered that I would still have a memory of it. Ice and cold are like the permafrost of the Canadian identity. Winters are never far from our souls, no matter where or how far we might travel.

I wrote “Down Here in the Garden” shortly after I moved to California. It was during the midsummer heat, and Donner Pass was populated with vacationing families. It was a gorgeous, idyllic camping spot. Touchingly, a child had left a mason jar of dried beans at the Donner Party memorial, and a drawing of a covered wagon and pioneer stick figure girl. Beneath it in crayon: “To Patty Reid, aged 8.” At once, I felt transported back one hundred and fifty years to this same lake in the dead of winter. I was struck by the contrast, and by the convergence between then and now: what has changed and what hasn’t. That’s how the story was generated.

In “Down Here in the Garden” you use landscape very effectively, both to set a bleak tone and to reflect Darren’s own tortured, inner landscape. Does setting often feature prominently in your work?

It’s never been a conscious decision to use setting in this way, but it does seem to be a natural outcome of my own creative process. Setting has always strongly influenced my plotting and characterization. It’s almost another character in and of itself, with a unique voice and motives. Setting is a remarkably effective writing tool; one which I think is often underutilized in fiction.

Your language is quite poetic. Do you read or write poetry as well as fiction?

I’ve certainly read a lot of poetry and love the imagery and structure, but I’ve always been more attracted to longer fiction. For years, I wrote lyrics for the band I played in up north, probably because no one else wanted to! My bandmates were my first editors. I don’t believe our singer was thrilled about memorizing the reams of material I foisted upon him, and our guitarist chided me (rightly so) for trying to fit too many words between the notes. Somehow we made it work. Honestly, those guys were great! I learned so much about writing through music.

The horror in this piece is quiet and mostly psychological, with a sense of dread building as the story progresses. Is this the sort of horror that appeals to you most, or are you also a fan of more graphic or overt types of horror?

Unlike my husband (author Norman Partridge), I’ve never particularly enjoyed graphic horror. (I think I can hear him splitting his sides with laughter as I type, though he loves—and writes—quiet horror as well!) I do appreciate some of the techniques of a more graphic style. I’m happy to learn from any author, however different the approach might be. In general, I read more mainstream, historical, and mystery novels. My favourite horror authors are the Victorian and Edwardian writers of ghostly tales: M.R. James, Henry James, Oliver Onions, E.F. Benson, Edith Wharton, William Hope Hodgson. And Charles Dickens! I love nothing better on a cold night than reading a dusty old anthology of old-fashioned ghost stories. I also greatly admire many suspense authors of more “recent” vintage, such as Rebecca Du Maurier and Mary Stewart (both of whom are masters in the use of setting).

I’m working through the final drafts of a historical novel set during the Civil War, just before the Battle of Fredericksburg. It’s about four soldiers in General Thomas Meagher’s Irish Brigade and has a dark, supernatural edge to it. 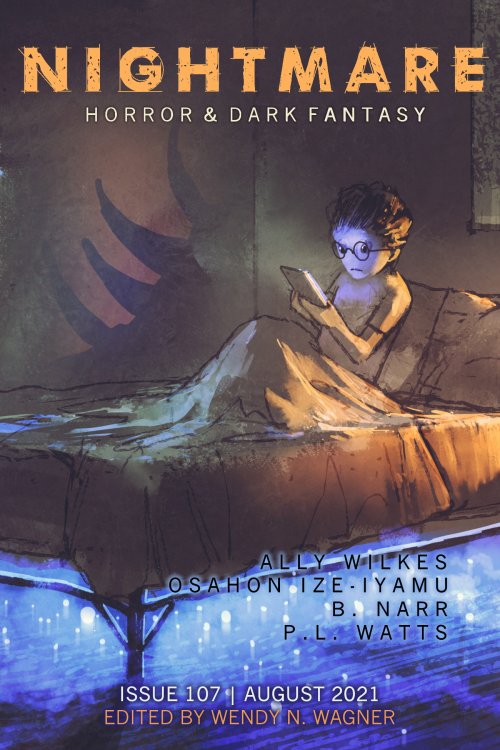