There’s a bending of time at work in “The Show” as we see glimpses of Martha’s past interwoven with what’s happening in the present of the story. What were the reasons you chose those moments from her past to highlight?

The past haunts Martha. It’s shaped who she is, and everything has led her to filming in that cellar and all that follows. For both myself and the readers, I needed those moments of sibling envy and rivalry, desperation, and grief for us to understand the woman Martha has become, and the importance of what’s happening to her now. Take those elements out, and the whole thing falls flat.

The aspects of gore in “The Show” are restrained rather than garish, though the content lends itself easily to going either way. Was that a conscious choice you made when writing this story?

I wanted there to be a detached, voyeuristic feeling to the violence. It suited the strangeness of Martha seeing past events, as well as the theme of this being a TV show. I felt what I’d written was explicit enough to let the readers fill in any gaps. Much of what I write falls into the horror category, but I’m not a big fan of huge amounts of gore. I like my horror to be much quieter, but hopefully no less brutal.

Martha is an interesting character, the charlatan who becomes the genuine article. Is that a type of character you’ve used before, or was there a particular inspiration for her in this story?

What are you working on now, that we can look forward to reading from you in the future?

I’ve just had a story out in Black Static issue 53 (ttapress.com/blackstatic) called “Inheritance” (my own take on Gothic themes) and a story reprinted on Mithila Review (mithilareview.com) called “Egg” (a fairy tale). The latter is part of the Mithila Review’s Asian SF special, and the whole issue is free to read online, including a roundtable discussion.

Next year, I’ve a story called “The Crow Palace” in Ellen Datlow’s “Black Feathers” anthology (original avian horror). There’s some other stuff I can’t talk about, and other than that, I’m working on pieces for my own anthology. Many thanks for including “The Show” and for interviewing me here. 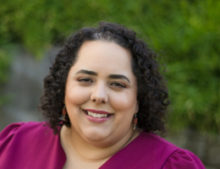 Coral Moore has always been the kind of girl who makes up stories. Fortunately, she never grew out of that. She writes character driven fiction, and enjoys conversations about genetics and microbiology as much as those about vampires and werewolves.

She has an MFA in Writing from Albertus Magnus College and is an alum of Viable Paradise XVII. She has been published by Vitality Magazine, Diabolical Plots, and Zombies Need Brains. She loves aquariums, rides a motorcycle, and thinks there is little better than a good cup of coffee.