While Dimas undergoes a tour guide’s ultimate nightmare of losing his tourist group, he tells a series of ghost stories nestled in the frame of a larger ghost story. Tell us about how you came up with this idea and Dimas’s character.

I should start off by saying that I wrote “Wish You Were Here” as a response to “Safe Haven,” the short movie set in Indonesia that was part of the V/H/S 2 anthology. I include it in a long, sad history of horror movies that thoroughly other-ify a real place, much like the Hostel series and Turistas—stories about innocent tourists ruthlessly attacked by a savage and borderline inhuman local culture. Not only are the real power dynamics of the tourism industry fairly savage, but I’ve always found the most effectively terrifying travelogues to be ones where geographic dislocation only unpacks some darkness hidden inside the traveler, like The Sheltering Sky or A Passage to India.

So I focused on a non-local tour guide, besieged by personal demons, who discovers that his tour group has brought along their own demons. Of course, the tour group believes that they’re the ones getting the crash course in exotic mysticism; hence their repeated insistence that their guide essentially exoticize himself and “tell [us] a ghost story.”

Some of the stories Dimas tells are actually terrifying because they reference violent historical events. How challenging was it to balance the horrors of the past with the supernatural menace in this story?

I’m all about the interplay between the “natural” horror of current events and the “supernatural” horror of ghosts and demons. I think the combination makes for a richer, truer story. I also think that, frankly, it’s important to remember that large swaths of the human population have been subjected to real horrors—genocide, ecological disaster, systemic discrimination—and their horror stories are going to look a little bit different from, you know, Poltergeist. Dimas’s ghost stories are reflective of the sorts of stories that I was told as a kid in Indonesia, many of which were imbued with the kind of tint, or taint, that comes from a long history of political violence: from colonialism, to authoritarianism, and beyond. This is all part of how I approach horror, but political science is also my day job. I think everything’s political. I think being apolitical is political.

The narrative is as much about storytelling as it is about the scars of history, grief, and ghosts. There’s the meta-referential nod halfway through about the denouements expected of ghost stories. Is this meta-reference also a means of commenting on the legacies of colonialism?

I hadn’t intended it that way, but I think it absolutely applies to the legacy of colonialism. In my view, a huge part of the postcolonial experience is the need to create a triumphant, simple Hero’s Journey about your nation’s past. It’s usually a quixotic project, to be sure. But as I wrote it, I was thinking about the hopeless quest for neat endings and predictable arcs and explanations in our ghost stories, which is so ripe for disorientation and confusion and discomfort.

I had conflicted feelings about Rose. I sympathized with her grief, but couldn’t help seeing how selfish she was for taking advantage of Dimas’s hospitality and his culture to overcome her loss. Like the other tourists, she didn’t truly engage his country or its history. What does she mean to you in terms of the West and its relations with Southeast Asia?

All of the tourists represent different slices of the way the West has interacted with Southeast Asia—from Melissa’s desire for entertainment and amusement to Josh’s desire to prove his intellectual superiority, from Ben’s clueless bumbling to Rose’s cold, calculated pragmatism. For sure, Rose has no interest in engaging with the local culture. Of all the tourists, she’s probably the least interested in engaging, because she’s on a singular mission to heal her own inner wound. Her approach is utilitarian, extractive, and exploitative—absolutely! But you know, at least Rose has no pretense. She’s the only one who calls the tour what it really is: a chance for the tourists to demand anything from their host country.

On your website, you wrote that your work could be summed up in these three songs: Sisters of Mercy’s “Lucretia My Reflection”; Fever Ray’s “If I Had a Heart”; and Massive Attack’s “Voodoo in My Blood.” Were there any specific songs that inspired this story or powered you through writing it?

Glad you asked. There certainly were. Mainly, it was “Manifest Destiny” by Zola Jesus for the combination of both a lamentation and a militant drumbeat (the anthem of postcolonial nationalism, if there ever was one), and for the desperate demand that anchors the song for everything, essentially, to be all right again. For me, this story is all about that plea. Like a lot of my stories, it’s about grief and trauma, and the way it makes you rethink what you thought was possible—it’s impossible I can be expected to go on this way—and—it’s impossible that this is the way the world looks now. And yet here you are: living in the impossible. Making bargains you never thought you’d make. 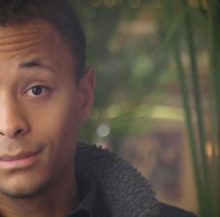