What have you been up to? How did this tale come to be?

This story is based on a nightmare I had a while back; one of those weirdly creepy dreams where the imagery was so distinct (including the Girl, the weird Vore sessions, and the ending lines) that when I woke up, after my pulse slowed a bit, I was like, “Damn, I need to write this down.”

I jotted the bulk of the draft into a notes app on my phone while on the bus to work, and then worked on fleshing it out and making it connect in creepypasta logic. I love strange, dream related horror stories—I entirely dig all the Nightmare on Elm Street movies, for example, even if Jason from F13 is my slasher boy fav—and I also love how virtual reality can be mined for potential horror.

I’ve always had a wide range of bizarre pattern dreams and nightmares (another dream that turned into a story is “Thread” (bit.ly/2Ltb6xU) and I dig them. (It is entirely my goal to eventually defeat all my nightmare nemeses. I’m close to beating the current one, the “Demon Cat” [bit.ly/2O4qYJf]. BRING IT ON, SUBCONSCIOUS.)

VR has that undeniable essence of dreamscapes or lucid dreaming: the mind thinks it’s real, and in the moment, you don’t know any other reality.

There were interesting moments around consent throughout the story. For example, either partner refusing during a session then cannot partner with that person in future games. The Girl requires consent to participate, but won’t leave if the answer is no. In a genre where subversion and transgression thrive, how do you choose which kind of suffering is allowable?

I’ve always had a fascination with the fictional rules of possession: what laws govern this? What are the loopholes? Why is there so much vomit? There is usually (if a victim) no consent for the entity to possess a host, which is part of the horror. More broadly, I’m fascinated by the rules that constrain the monsters or people in horror. So like, choosing to watch a video you have been warned is haunted suggests consent. Forcing someone to watch that same video so they will be cursed entails no consent, and is violence. So where are the lines drawn for accidental glimpses of this haunted thing? For being exposed to it by malicious intent? For curiosity or scientific experimentation? I love this stuff.

I wanted to keep the horror and suffering free of violence that requires the victim to meet a criteria such as gender, morality, religion, etc. So it really doesn’t matter who you are: if you play Vore, you meet the Girl and . . . welp. There is that initial element of choosing to play, which then gets entirely twisted, because the consequences are not made explicit to the participants at the onset. You can’t force someone to play Vore, though.

Are there other stories or films based on creepypasta that are close to your heart? What do you think makes or breaks an idea based on a meme?

What’s so awesome about this age of internets is all the delightful creepypasta you can find. Some of my favorites are the sleep experiment ones, anything with haunted or random staircases/doors where they don’t belong, and video game related horror (which can include VR). I enjoyed the Channel Zero (bit.ly/2Soej0T) adaptations of creepypasta mythos (I really liked “No-End House,” in particular).

I absolutely love anything with haunted films/movies: frex, Sinister (2012) impressed hard on my brain; also Shutter (2008), which is amazing; The Ring delights me; and many found-footage films like REC and REC2, The Blair Witch Project, Paranormal Activity, Unfriended, Creep, Afflicted, Night Shot, The Bay, etc. Stories like Gemma Files & Stephen J. Barringer’s “each thing i show you is a piece of my death” (Apex, bit.ly/2TcBPhH) or Michael Wehunt’s The Pine Arch Collection” (The Dark, bit.ly/2Lutx4Y), and Gemma Files’ novel Experimental Film.

(As of this interview, I’ve started playing Layers of Fear 2, which has the premise of a movie set aboard a cruise ship, and it’s wonderful. While I’m hopelessly bad at playing it, I’ve also enjoyed watching Outlast—which is definitely in the camp of horrifying found footage.)

As to what makes or breaks an idea, I honestly don’t know—some of the best ones, I think, tend to have underpinnings of fundamental human needs turned into fears: shelter (haunted houses/creepy nature), food (eat or be eaten), community (cults, mobs), sleep (dreams and imagination). When you take a thing humans are conditioned to accept as necessary and normal and then twist it somehow, it messes with us. I remember reading somewhere about why clowns are scary: the face paint is a distorted idea of human futures, and the brain is like OH HELL NO. Clearly, there are things brains are right about.

What are you working on now? What can we look forward to next?

Still working on the space opera novel, two different novellas, and short stories—all in various stages of completion! The first half of the year was a bit of a horror show in terms of work and health, but I’m optimistic. I keep plugging away. If all goes well, I will have a couple stories in anthologies out in 2020. Fingers crossed! (Your own, ideally.) 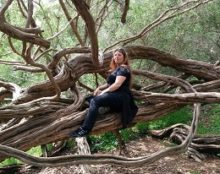