I loved how richly the DNA of gothic literature runs through this story. Were there any particular works you drew inspiration from?

Almost all of the clichés alluded to in “The Girl and the House” can be found in the work of the prolific Eleanor Hibbert (1906-1993), who wrote thirty-two gothic romances under the name Victoria Holt, in between churning out about 130 other novels in related genres. Hibbert’s first Holt novels attempted to stretch the genre somewhat, but afterwards, she fell into a rather comfortable, predictable pattern: girl grows up knowing that she doesn’t quite fit in with her family and society, and inevitably heads out to a mysterious house, with mysterious people (frequently including at least one older woman with the mind of a child), and a Compelling Yet Troubled Gothic Hero With a Past. Misunderstandings Abound. Mary Stewart (1916-2014) also played with these tropes in her own, generally much better Gothic work, as did Barbara Mertz (1927-2013), who wrote as Barbara Michaels and Elizabeth Peters, using the Gothic and its tropes to write New York Times bestsellers as Michaels, and poking fun of the entire genre as Peters. Her books vary in quality, especially the early books and the ones towards the end, but vintage Mertz is hilarious, and well worth checking out.

Other Gothic works probably lurked in the back of my mind—I’ve read a lot of them—but those are the standouts.

In turn, all of these works drew pretty heavily on Charlotte Bronte’s Jane Eyre. I like to think that twenty, thirty years after the ending of that novel, Jane woke up, realized that India would be a rather cool place to visit, especially if she wasn’t with someone as dull as St. John Rivers, conked Rochester hard over the head, and headed off to explore the world. But that’s me.

The ambiguity of the characters’ identities is obviously a very deliberate choice, as is the story’s emphasis on the many shades of possibility contained within it. What was the reasoning behind maintaining that ambiguity?

That ambiguity is an echo of many characters in Gothic novels, who are deliberately kept ambiguous to prevent the girl—and the reader—from knowing exactly what is happening until the final reveal—a reveal that in some cases is also left ambiguous. Mary Stewart’s Nine Couches Waiting, for instance, deliberately keeps us from seeing a full picture of one character until the second to last page, to prevent readers from knowing if he is the sort capable of murdering a young child. It also features heavily in the Gothic works where the girl must choose between two or more men—that ambiguity can heighten the suspense.

And of course, if she knew the answers—any of the answers—she wouldn’t be in a story. At least, not a Gothic story.

A theme that often seems to appear in your work is unpicking or subverting established storytelling forms, such as fairy tales, and now this. What draws you to these kinds of retellings?

I always like to explore what’s left out of fairy tales, and what happened afterwards. This story is basically just an extension of that.

What struck me about the ending was the way the unnamed narrator partially merges with the house, and carries some of it away with her. The house is a reoccurring metaphor in the Gothic, and is often aligned with femininity in its enveloping nature and possession of secrets. Can you tell us a little more about the relationship of the house with the narrator in this story, and what you were trying to evoke with that ending?

In either case, the house itself becomes part of the girl’s story: either it was the means of introducing her to her partner, or, it is her new home. And as such, it becomes part of her—a concept I wanted to explore.

But also, I wanted to explore the idea of how trauma can sometimes linger, and even become a part of us.

What’s next for Mari Ness? Is there anything we should be keeping an eye out for in 2019?

Nothing that I can really talk about yet, alas, but you can keep your eye on my twitter, @Mari_Ness, or my website (marikness.wordpress.com), for updates! 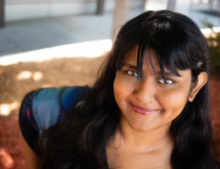