Does this story have an origin story? How did you come up with Kyle’s great name?

I started with the toenail scene with very little context, and then went back and tried to create a character who could take such an extreme action just to get someone else’s attention and remain sympathetic to the reader. I rely heavily on the social security administration’s baby name database when naming characters, and I mostly do that to keep myself in check—my natural inclination is to name everyone very fancifully, and that often doesn’t work with the tone of a given story.

You do a great job capturing the way teenagers talk—there’s no forced slang, just a comfortable, low-key informality. Does that come naturally to you, or do you have a special process to keep yourself sounding young and real?

Dialogue is the part of writing that comes most easily to me. I don’t know if actual teenagers would think I sound authentically “young” because I don’t spend much time with them. In a little over a decade my kid will be a teenager, and I’ll have the opportunity to both observe the speech patterns they use with friends and solemnly disapprove of their interest in whoever the XXXTentacion of 2029 is.

I like the way the rules pile on each other to create a more and more ominous picture of Kyle’s life. How did you come up with them?

Once I had Kyle’s voice down, they showed up pretty naturally. I think Kyle’s dad is just an extremely narcissistic version of a very common kind of classically toxic American male.

I love that when Ramage uses his powers, his shadow changes to become the same as the person he’s mind-reading. It reminded me of a lot of moments in film and literature where shadows have a mind of their own or are secretly revealing. How did you come up with this idea? What are your favorite shadows in movies/books/video games?

I’ve always liked shadow stuff. I’m the last person alive who doesn’t play video games, so I can’t draw any examples from that medium, but I’m generally into shadows, reflections, non-supernatural doppelgängers, changelings, people’s own skeletons as independent from themselves, that sort of thing. I feel like I ran into a lot of good shadow stuff in the books of my childhood, and that’s why I like it in the first place, but I’m too far removed from them to remember specific examples. Which is kind of terrible, isn’t it? The books I read as a kid helped to shape me as a writer, and now I can’t even properly cite them.

Do you have any projects we should be looking out for? (Perhaps a novel?)

I’ve tried writing a novel a couple of times, but by the 40,000 word mark I always hate my characters and my words and myself and drop it. I know that’s a normal part of writing, and that you just to have to power through, but telling myself to “just power through” is so much easier than actually doing it. Right now my partner and I are raising an eighteen-month-old, and between that and working full time, I’m lucky if I can crank out a couple short stories a year.

And last: Do you have a pair of aviator sunglasses?

I feel like saying yes would make me such a tool. Also, the answer is yes. 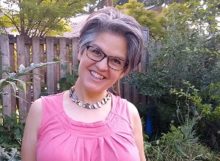 Wendy N. Wagner is the author of the SF thriller An Oath of Dogs. Her other work includes two novels for the Pathfinder Tales series and more than forty short stories. She serves as the managing/associate editor of Lightspeed and Nightmare magazines. She is also the non-fiction editor of Women Destroy Science Fiction!, which was named one of NPR’s Best Books of 2014, and the guest editor of Queers Destroy Horror! A gaming and gardening geek, she lives in Oregon with her very understanding family.