He cut off her arms and threw them on the side of the road. They wanted a boy. Her uncle taught her how to play the game. The last time anyone saw her she was dancing. She was drunk. She was flirting with everyone. She was wearing a short skirt. She had a lot of eyeliner on. She got into the car, which anyone knows is a stupid thing to do. She was stupid. Actually, she was very intelligent, but had no common sense. It wasn’t her fault. But what was she thinking? He pulled over to ask if she had seen his dog. She skipped down the sidewalk because she had just learned how to do so. The first time he hit her, he apologized and vowed never to do it again. He did it again. She had a crook in her nose where he broke it. She learned what brand of makeup covers bruises. Nobody guessed the trouble she was in. A lot of people knew she was in trouble, but a person who doesn’t want to be helped can’t be. They dated for six months before he murdered her. She was very popular. No one can remember her name. She was asleep in her bedroom, which was a diorama of her life from the pile of stuffed animals in the corner, to the cheerleading ribbons, to the college applications splayed on her desk. He snuck in through the window. A pillow can muffle screams and gunshots. She was strangled. She met him at a bar. Her friends begged her not to leave with him. She laughed. When she danced, she raised her arms overhead, her fingers apart, her hands catching the light. She spun in an ever-widening circle. She hoped there was a way out. She tried to remember everything she’d been taught about self-defense. She remembered all of it. She blamed herself. She cried. Her father told her he felt terrible. Her father told her it was a secret. He told her it was all her fault. She hiked alone. She married him. She told him she knew what he had done. She was waiting for the school bus. She didn’t run fast enough. She wore dark lipstick. When she opened her mouth to scream, she threw up instead. She wasn’t paying attention. She was day dreaming. Her mother told her she could not go on spring break, but she went anyway. She met her best friend for a walk. She fought until the very end. She couldn’t believe it was happening to her. If she hadn’t been wearing heels, she might have gotten away. He locked her in a room, but sometimes let her out. Why didn’t she escape? She simply disappeared; no one is even sure she is dead. She was home alone, studying, when they broke in. She jumped from the car. It was in broad daylight. When she screamed, he shot her. He used a knife. He was a stranger. She recognized his voice. He was a cop. He was a priest. He was her professor. Her husband. Her father. Her lover. Her boyfriend. Her ex. He was the high school star football player. He said he just needed to see her one last time. She went. She didn’t go. She was five years old. She was only seventeen. She was in college. She was excited about her first apartment. She was a newlywed. An empty nester. Never married. A grandmother. She was beautiful. She was plain. She had a bright future. An impressive career. Her whole life was a mess. She took drugs. She never took drugs, not even caffeine; that’s what her mother thought, but they found a Keurig in her kitchen. Was it a clue? Her Facebook page was mostly kittens. She didn’t have a Facebook page, which was strange. Her Facebook page was full of politics, and her opinions made her less appealing. How could she believe the things she did? She had a crack in her voice that was annoying. Actually, she was a crappy friend. She stole boyfriends and forgot birthdays. She rode her bicycle to the store to get napkins for the party. They never found her. She used to sing in her sleep. He thought she was older. He thought she was younger. He thought no one was watching. She thought maybe she’d become a private investigator so, when he showed up, she used her smart phone to stealth take a picture of him. She died anyway. She stands by the side of her parents’ bed, watching them sleep. She is a ghost. She runs over the same hill every night, and she doesn’t know why she is there. She’s afraid. She’s making a plan. He ties her wrists. He ties her ankles. She left the window open because it was a hot night. She came home and he was there. He was her first kiss. Once, she thought she loved him. She suspected he had moved on to her little sisters. She hoped she was wrong. She was frozen. Alive. She was broken like a doll. She was a doll. She was a bitch. She was crazy. She was timid. She was born to parents that loved her so much. She cried a lot. She never made a sound. She tried to do the right thing. She deserved it. She never, for one moment, believed it was her fault but she was sorry. She prayed. She cursed. She asked why. She never even had time to speak. She woke up and he was there. She turned, and he was there. He came out of nowhere. She raised her arms to the sky, her fingers splayed; she turned her face to the stars, she was spinning in the light, and everyone stopped to watch her. 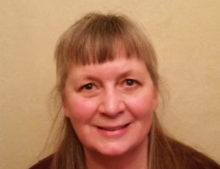 M. Rickert has published three short story collections: Map of Dreams, Holiday, and You Have Never Been Here. Her stories have been collected in numerous anthologies including American Fantastic Tales (Library of America), The Big Book of Ghost Stories (Vintage), Nightmares: A New Decade of Modern Horror (Tachyon) and Shadows and Tall Trees 7 (Undertow Publications). She is the winner of the Crawford Award, World Fantasy Award and Shirley Jackson Award. Her first novel, The Memory Garden, won the Locus award. Before earning her MFA from Vermont College of Fine Arts she worked as a kindergarten teacher, coffee shop barista, Disneyland balloon vendor and personnel assistant in Sequoia National Park. She currently lives in Wisconsin where she is working on a new novel, and teaching yoga. Her story, “The Shooter” will be published in 2019 in Echoes: The Saga Anthology of Ghost Stories. Find her online at www.mrickert.net.