The Elements of Her Self

She remembered the scent of rain and bamboo. The squish of her shoes in the soft loam as she followed her father through the forest. He with his axe over one shoulder, and she carrying a lunch her mother had packed for them. She had always thought him a giant of a man, so powerful and strong. But she remembered following along behind him and noticing the delicate curve of his back, the increasing slenderness of limb. He walked with a slight hunch to his shoulders and his hair had lost nearly all of its lustrous black to a flinty gray. He’s getting old, she thought with some wonder, Okaasan too.

When they walked, he would tell her the story of herself. “Just over there,” he would point. He had brought her to the tree once. It was an unremarkable stump. Still, Otosan always left rice cakes or some other part of his lunch that he would save for the purpose. Place the offering, clap twice, bow, “We thank you for this precious gift you have given us.” He would bow again, and then back away as if visiting some dignitary.

“Just over there,” he would point. She hadn’t always come with him, but he’d taken a fall and come home with a gash on his forehead. They never mentioned it, but afterward, she suggested she was getting too sedentary and lazy. She would benefit from going out with her father if he would allow it.

“The air was different near that stand of trees,” he would say. “I knew there was something special there.” Then he would wink at her and she would laugh. “I tapped on the trunks to test their tone, and one tapped back! I put my ear to the side, ‘Hello? Hello?’” He pantomimed listening to the side of the tree.

“What did you hear?” was her part of the script.

“Coo, coo, like a dove! Well, I thought, that will make a fine addition to our meal tonight.”

“I did! I looked for the hole it went in through, but I couldn’t find it. Well, I thought, this is a good tree. If I lose the dove, at least I’ll still have the wood. So I cut it down.”

“And the dove never flew out?”

“And what did you find?”

She always gasped with surprise. “And what happened? What was there?”

Here he would cradle his big hands, angled toward his face with a gentle smile. “My beautiful baby girl.”

Sometimes she imagined she could remember him taking her up out of the tree.

When she opens her eyes, there is no light. Then she can’t tell if she’s really opened them or not. She tries to move her hands, to rub her eyes, but her limbs don’t respond. Her flesh feels unfamiliar, heavy, lifeless.

She remembered when the suitors came. She was beautiful, they said. Exotic and dainty. She was good, they said. Obedient. They knew her reputation for doting on her parents. She would make a fine wife, and they were in love with her, each one, and she must marry them. Otosan would send them away and then look to her with a shrug. “Do you like him?”

“Fine then,” she said, “let them prove their love and their worthiness and return with the alms bowl of the Buddha.”

They left then, some complaining that she thought too much of herself, or calling her some kind of witch. A few returned with forgeries. How could they not be? Even so, a monk was sent for from the local temple to verify it. This angered the suitors further.

One and two at a time, they returned and hurled insults from the gate about her virtue and appearance. Instead of fair they now found her ghastly. They would buy a bundle of bamboo, they offered, and show the woodcutter what to do with such a stubborn daughter.

Okaasan lost patience and took a switch after them, decrying how ashamed their own mothers would be of them. They fled her mother’s wrath.

Then, for a time, they left her in peace.

She strains to notice any change, any sound other than her own pounding heart, any scent beyond her own acidic breath, any light. Any light at all. She is aware of herself, of her limbs and torso bent to fit into a snug enclosure, like a garment chest, like a bamboo segment, without being able to feel her body.

She remembered when the emperor came. He had heard of her from others and came to see for himself if her beauty was as reported. He asked for her hand. She didn’t want him and demurred. He sent gifts. This pleased her mother for a time. He sent sentries—to protect her, their captain said. It began to interfere with her father’s business.

He began to send dowry items, which were politely, but firmly, returned. There were strange, Western contraptions, too, and a pale-haired foreigner to interpret them. He was pleasant enough, until he, too, declared his love. Then the emperor’s sentries chased him off.

But the gifts continued, and Okaasan grew annoyed, and then afraid, “Why won’t he stop?”

Then, suddenly, they did.

She awakens in the darkness. She knows with a depth of certainty that her parents are dead and that she is not. She can’t see anything. She can’t feel her body. Her tears are hot on her face, but they are silent. Time stretches and nothing changes. She tries to push against her container, but her body does not answer. She waits until her heartbeat slows again, until she begins to see the imaginary lights of dreams spiraling behind her eyelids. Her parents have gone to the moon, she understands now, and they will send someone to fetch her.

She remembered being inside the tree. The scent of rain and bamboo. She was warm, content. She couldn’t tell where she ended and the darkness began. She was there for such a long time. There was a gentle thunk, thunk that seemed to come from all around her. Excitement coursed through her veins in an energetic burst, and she found the edges of herself within the edges of her container. Then she heard what she would later learn was the steady swing of her father’s axe.

When a crack appears in the dark, it seems at first as if it is below her. She is hovering in the vast darkness of the world and the edge of it appears. It glows with light, a seam of lava. It grows to break the world open, to reveal another world, bigger and more vibrant than the darkness. Then she is falling into it. Her limbs unfold of their own accord. She is not falling but ascending, suspended in a firelit room. She takes in the wires that disappear into her arms at shoulder, elbow, and wrist, into her legs at hip, knee, and ankle. She is suspended from the ceiling with those wires. She follows the lines with her gaze, up and into some sort of contraption like a loom, across the ceiling, and down again to . . .

Her heart lurches for a moment in hope when she sees the man she recognizes. Then she recognizes that he holds wooden panels connected to her wires. Fear settles into her stomach like a ball of ice, and she feels it harden her soul and dissipate into a cold rage. He waggles one lever and her legs kick and dance. He waggles the other and her arms sway.

“Good,” she hears him, muffled and distracted. He looks at her and smirks. “What, my puppet? No greeting for your master?” He turns the panels and her body bends in half, and she is staring at the floor in a low bow. “Good,” he says again. Then his voice comes again, much closer. “Do you know that your skin glows like moonlight?”

She tries to speak, but her breath is only a wheeze.

He tips her chin up so she is looking at him. “You think me a monster. But truly I adore you. You were too tempting to let go. I’m sure once you adjust, you’ll come to see that I really am a good person.”

She can make no reply.

He turns away and pulls on her wires again. Her body pirouettes and does a small curtsy, and then he folds her back into the darkness.

It is a dark so complete, it feels expansive. Soon she is floating again, watching the lightning shapes behind her eyes. She cannot feel her limbs. But there is a globe of ice in her stomach, she can feel it, and she nurtures it.

He puts her back into the box and brings her out again and again. Once he has another man with him, whose eyes grow wide and whose face loses color.

“Oh, she feels no pain,” he says to his friend. “She wants for nothing.” He considers her with a self-satisfied smile. “I rather think she’s content.”

He brings her out of the box and puts her back in again and again. It is dark, but she must not sink into it, and she must not be frightened. She has done this before. In time she will find the edges. She feels the ice in her stomach, in her veins now. She remembers her father lifting her out of the freshly cut bamboo. His kind smile. Okaasan stopping her at the door to tie a kerchief under her chin, “to keep your head warm,” her mother’s hand lingering on her cheek.

She pushes her breath through her vocal cords. “I am here,” she whispers and hears her own voice. And slowly, she closes her fingers. 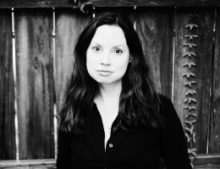 Kiyomi Appleton Gaines is a writer of fairy tales and other fantastical things. She was a 2018 Contributing Editor at Enchanted Conversation, and contributor to Mad Scientist Journal 2019 Spring Quarterly. Her work has also appeared in Quail Bell Magazine, A Twist in Time, and The Grimm Reaper. When not writing fiction, she writes about diversity and inclusion and finding work-life balance, and leads and consults on that work for local nonprofits. Find more of her writing at “a work of heart” (workofheartkag.wordpress.com) and follow her on Twitter @ThatKiyomi. Kiyomi lives in New Orleans with her husband, a one-eyed cat, and a snake.