The Beasts of the Earth, the Madness of Men

The crew is drowned, the ship is flayed to ribbons and splinters, and her own arms are a-rotted down to yellowed bone and salt-cured jerky not even the gulls will touch. Cross-legged on her chunk of life-raft, staring at that familiar line of decaying blubber through the spyglass, all Captain Perth can think, over and over again, is: just a little further. Just a little further and things will right themselves, if only I am strong.

Madness tastes like copper and salt, old fish and the rank flavor of your own tongue putrefying between your clenched teeth. It stinks like guano, wet lumber, rancid fat from a beast almost as unnatural as yourself. Sometimes—on the bad days—it smells like the memories of places and people you’ll never get back, gardens and faces you will never see again in all your long, miserable lifetime. Perth chases the whale because it’s all she knows how to do. Perth chases the whale because it was there when all the world was green, and she cannot let go of the cursed thing even to lay down and die. All well and good for the salts to wag their grizzled heads and say oh aye, madness is repeating the same course over and over again and expecting a different port at journey’s end, no doubt about that. It never seems like madness when you’re the one at the helm; if it did, mad people wouldn’t be mad in the first place.

Just a little further. Her finger-bones are curled around the harpoon in a lover’s grip. The seabirds scream and swoop to scoop beakfuls of sloughed flesh and oil from the swells, what’s left of the makeshift sail snapping in the wind above like a ghostly coachman’s quirt. The sun rises and sets and rises and sets and ‘round and ‘round they go, on and on in the same pathetic, tottering bilge donkey’s circuit. Just a little further, and everything will be as it was before.

But she knows that this is a lie.

There are as many theories about the whale’s origins as there are rusted harpoons jutting from the creature’s back. The most popular ones say it was revenge that stirred the great flippers back into motion. A podmate butchered, or a calf lost, or half a dozen other silly, sentimental claptraps that sound more like children’s tales than the back-and-forth mess-cabin musings of grog-addled, louse-kissed sailors.

Bilgewater, all of it. Perth knows better. That kind of anger burns up too fast and too easily, and while some have a reserve that goes on smoldering for years or decades or lifetimes, that’s not what this is all about. The whale seems to want nothing more than to quietly fall apart like a slice of old cheese in a puddle. It doesn’t eat maidens; it doesn’t wreck ships. It swims on and on, aimless as bad luck.

Rage can’t keep you going like that, but sadness and old regrets can. Perth has her own theories as to why a body might keep moving long after life and hope have been drained away. Her free hand finds the locket hanging ‘round her neck, the chain sunk deep and permanent into the cured flesh. Barnacles have sealed the pendant shut, but she knows the face inside by her dried fig of a heart; she needs no oyster pry to recall that. When she’s at the bottom of the deeps with only the hagfish and the anglers and the bones of barquentines and bowheads to keep her company, she’ll dream of it still.

The days and nights have long since melted into a solid yellow mass, like a tallow candle left burning too long on a nightstand. Occasionally she sees other ships on the horizon. (And how many ghost stories has she inspired now? she wonders. What do sailors and whalers think when they look out through their own spyglasses and see her squatted on her scrap of drift, grinning ivory and curling at the edges like a sun-dried perch?) But the ships she sees are as unremarkable as seabirds or sunsets, nothing worth wasting memory on.

It takes a great event to differentiate one sunrise from the next. In this case it’s a storm, fiercer and blacker than any Perth’s encountered since the day her ship and her lungs first took on water. A black line of sediment on the horizon that sprouts a crop of thunderheads. Waves that pace and toss their heads with growing restlessness as the afternoon suddenly goes dim. The deep, stifling pause before the first bolt of lightning splits the sky from liver to lights. Wind and rain, buckets and buckets of it, turning the air to water and the water to darts and the whitecaps to jagged, monstrous jaws that could swallow a church steeple whole.

And then the whale. It never strays too far, her prey. Maybe there’s something inside that won’t let it, a hateful little voice hissing you’ve earned this.

It breaches close enough to her raft that she can see the bones of the flippers shining through rents in the flesh, like white faces behind ragged curtains. Up and up and up it climbs, an entire continent of rotten meat, a mountain range of carrion. Slimy things wriggle and squirm in eye sockets the size of hogsheads. Water sluices down from its mottled gray back, pocked and pitted as the moon. Through the storm’s teeth Perth watches as it blots out the sky above her—it seems to go on forever, the shark-gnawed flukes, the belly riddled with streaming caverns—and, for the first time in who knows how long, something akin to an emotion stirs in her chest. A strange kind of happiness, maybe, out here in the maelstrom with the sea and the spume and the horrid awesomeness of the whale.

But it passes, as all distractions do. The whale completes its arc and vanishes into the green-black as quickly as it came. A wash of memories slams into her. She falls to her gristly knees and vomits seawater flecked with bits of stomach lining.

Recollection always comes, whether you want it or not.

Sheaves of letters on paper yellow as sun-rotted silk, scattered for the wind and the waves to rifle when Perth’s hopes swam north and her ship sank south. She kept them in a hatbox beneath her bunk in the captain’s quarters, because she was no stronger in life than she would be in death, and torturing herself with old hurts and wrongdoings had become an addiction more powerful than the opium pipe. The script (firm, no-nonsense, blue ink) had been traced by greasy fingertips so many times only the imprint of the words remained, carved into the pulpy surface like a sailor’s initials whittled into a beam. And then the sea took those as well, and she was left with nothing but the memory of a goodbye, and she knew that this, too, was her doing. Take the medicine you’ve earned, dearie duck. Swallow every last blessed, bitter drop.

The whale beaches itself on a strip of pockmarked stone and black sand. Dead trees reach up to clutch at the gray sky’s skirts. Bones lay scattered up and down the coast for as far as the eye can track, rolling like a cast die each time a wave rolls inland. They rasp against the underside of Perth’s raft as she pulls ashore, the only bright and polished things in this faded daguerreotype of a landscape. She kicks them aside. Surf the color of driftwood foams around her ankles.

“No,” she says. The noise is less her rotted tongue and vocal cords making recognizable words and more the universe remembering what that might have once sounded like. “Never.”

She takes a swaying step. Another. Invisible strings pull her along the sandbar, staggering the final yards like an old dog finding her sealegs. The bulk of the whale crests before her, bone and barnacle and bare, slippery sinew. Baleen between the jaws like an antiquated harp with all the strings snapped and fraying. Hagfish wriggling slimy sailor’s knots through what’s left of the flesh. When she lays her finger bones against its ruined side she can feel the faint vibrations of their stirring, like the ghost of a long-dead pulse. “Get up, gods damn you. We’re not done yet. We can’t be done.”

A groan comes from somewhere deep inside the beast. It’s the sound of an old ship threatening to break apart, finally strained beyond what oak and iron can endure. Let me die the final death, woman. The bottom aches for my bones. The crabs and the little nibbling fish call out to me. My ancestors sing songs of rest from the silt. Unclench your grip and let go, for both of our sakes. Mercy. Mercy for your soul and mine.

Perth ignores the plea and pushes. Her claws sink elbow-deep into the jellied mass. Twenty able-bodied living men could not move the mountain but beneath the straining gibbet’s wreck of her it shifts, ever so slightly. Somewhere out of sight bone strikes bone and the resistance gives her more leverage. The heels of her boots dig furrows in the wet sand. Every bit of will and concentration she has left bends towards budging the whale from its resting place. And reluctantly, resignedly, with a noise like a sigh and a noise like a sob, it lets itself be shoved towards the water, shedding bits of gristle and blubber as it grates across pumice. The oily waves slowly choke the beast back down, fore to aft.

When the gulls are through cleaning up, there’s nothing to show the beast was ever there, save a deep furrow in the gravel identical to a hundred others up and down the beach. And the bones, of course. It always sheds a few. Perth wonders how many more it has to lose. She wonders, not for the first time, how much longer they can go on like this.

She waits until the whale has a good head start. Then, harpoon in hand, she pushes her raft out into the surf and follows. 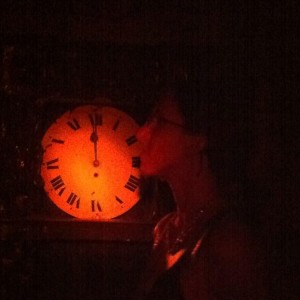 Brooke Bolander is a chaos-sowing trickster girl of indeterminate employment, half-tornado, half-writer. Originally from the deepest, darkest regions of the southern US, she attended the University of Leicester from 2004 to 2007 studying History and Archaeology and is a graduate of the 2011 Clarion Writers’ Workshop at UCSD. She enjoys loud music, peaty scotch, drawings that move, and anything pumpkin-flavored you might happen to have on hand. Her work has previously been featured in Lightspeed, Strange Horizons, Reflection’s Edge, and the Prime Books anthology Aliens: Recent Encounters.