Sabbatical in the Ohio Methlands

Not like in the movies, anyway. To begin with, they’re alive. And they don’t eat their victims. They’ll rape you, rob you, murder you, sure, but not eat you.

The rest of it’s the same, though.

They lurch around looking dead. They smell dead. Boils, abscesses, old infected injuries; they all do their part in approximating putrefaction. Sometimes a murmuring haze of flies will surround their eyes and mouths. They look like skeletons in leather sheets. Their knee joints have a bigger circumference than their thighs. Starvation and malnutrition are the norm. But their crippled movements and disoriented moaning can be deceptive. Step into the street with your head elsewhere and they’ll swarm you.

Afterwards, your corpse will look like it’s been eaten.

But they don’t eat you.

I’ve seen it happen too many times. Some family in a station wagon, just passing through, gets lost, doesn’t see the roadblocks. College kids looking for a gag. Survivalists, testing their mettle and failing. I even watched them get an Ohio state trooper once. But usually those guys know better.

This is the sixth year I’ve been coming to what used to be Gatling, Ohio. Like most of the small towns in America’s midsection, Gatling was abandoned after the Meth Rebellion of 2019, given over to the meth zombies who now wander its streets and sleep in the doorways of its uninspired, post-WWII architecture. The buildings are falling apart. Few of the windows remain unbroken. Insulation hangs from the ceilings. Scrolls of wallpaper curl off the walls. The only life here is that which feeds off meth and wanders the streets, moaning like something out of a Romero film, looking for the high that will take them through the coming night.

Luckily, the little second floor dentist office I’ve taken over as my observation point has escaped the depravations. During the day, when the meth zombies are most active, I can sit at the window and get film footage or dictate notes, whatever I feel like doing. At night, I sit in the old patient’s chair and read Jack Finney novels and drink gin. It’s diligent fieldwork—don’t get me wrong—but I enjoy my summers here in Gatling just the same.

Gene Northrop, a chemistry professor from Texas A&M, has a similar setup across town in the old New Life Baptist church. I’ve seen him around some. He’s working on a paper on aboriginal techniques for methamphetamine production in the post-industrial ruins of abandoned America. Sometimes, late at night, I’ll hear a building explode at the edge of town, and I think to myself, Ah, one of Gene’s grad students just scored himself a paper. Some night soon I’m going to visit him. Maybe we can compare notes.

In the meantime, I’ve been working on a paper on the mating habits of the female meth—

Okay, I need to change gears for a second.

There was a noise outside the door just a bit ago, and I had to make sure it wasn’t a wrecking party. The males can be dangerous when they’re scavenging for a high. I had to shoot a few of them earlier this month. I hated doing it, but I have to preserve this observation post.

Luckily, it was only Susan.

She started coming here, to my office, two years ago. She’s a white female, early twenties, which means that she was probably still in her teens when the Rebellion happened. The meth has charred most of her mind to cinders, but her survival instincts are still strong.

She caught me off guard the first time she came here. It was late at night. I had gone through a lot of gin. I got up from my dentist’s chair to jot down some notes on something I’d seen that day, forgetting the front door was still unlocked. I heard a floorboard creak and turned around. She was squatting in the middle of the floor, dressed in rags, her long brown hair a frizzled, shaggy mass around her dirty face, nicks and cuts all over her hands and arms.

Have you ever been watched by a squirrel?

Same nervous, unblinking look I got from her.

I tried to speak, but she scrambled toward the door. She didn’t make it far, though. She was hungry, dehydrated, her body weak.

I gave her some clean water and let her sleep on my couch. When she woke the next morning, she was going through withdrawal. She looked at the clean clothes I’d dressed her in, touched her face that I’d scrubbed clean, and panicked. Residual feelings of violation? I wondered. I watched her from my desk. I put a military MRE on the floor. She snatched it up and backed toward the open door. I didn’t make a move to stop her, just went on smiling.

I was delighted when she came back the next night.

We developed a routine. I’d leave the door cracked at night, a little food and water on the chair next to my bed. Though she never talked, she could still communicate, with her eyes and her body language.

I started calling her Susan, after this girl I used to dream of dating back in my grad school days. I don’t think my meth girl minded. It seemed to comfort to her, just as she became a comfort to me. She became my bulwark against the loneliness that used to overwhelm me here at night in the Methlands.

I’ve been back in Gatling for three days now. That first night, when I was still getting settled, she came to me. She had something to show me, a memento of our last night together last August.

Now I’m sitting here at my desk, watching her rub her belly, and I can’t help but wonder if her baby will be born without a soul, or if it will lose it along the way. 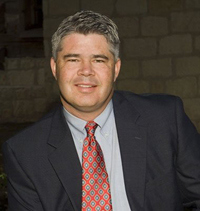 Joe McKinney has been a patrol officer for the San Antonio Police Department, a homicide detective, a disaster mitigation specialist, a patrol commander, and a successful novelist. His books include the four part Dead World series, Quarantined, Inheritance, Lost Girl of the Lake, The Savage Dead, Crooked House and Dodging Bullets. His short fiction has been collected in The Red Empire and Other Stories and Dating in Dead World. His latest novel is the werewolf thriller, Dog Days, set in the summer of 1983 in the little Texas town of Clear Lake, where the author grew up. In 2011, McKinney received the Horror Writers Association’s Bram Stoker Award for Best Novel. For more information, go to http://joemckinney.wordpress.com.