Published in Nov. 2014 (Issue 26) | 1947 words
© 2010, 2012 by Karin Tidbeck. Originally published in Swedish as “Rebecka” in Vemär Arvid Pekon. First published in English in JAGANNATH. Reprinted by permission of the author.

The outline of Rebecka’s body is light against the scorched wall, arms outstretched as if to embrace someone. The floor is littered with white ashes. Everything else in the room looks like it did before. A kitchen table with a blue tablecloth, a kitchenette stacked with dirty dishes. A wrought iron bed, which I am strapped to.

I ended up here because I was Rebecka’s only friend. As such, I used to clean up after her half-hearted suicide attempts: blood from shallow wrist cuts; regurgitated benzos and vodka; torn-out overhead light sockets and doorjambs that wouldn’t hold her weight. She would call me in the wee hours of the morning: Get over here, help me, I tried again, I screwed up . . . and I would go over there to nurse her and hug her, again and again. What was I supposed to do? I wanted to tell her to do something radical—jump from the West Bridge, throw herself in front of a train—just to get it over with. But I didn’t have the heart. I don’t know why I remained her friend. It’s not like I got anything out of it. It was the worst kind of friendship, held together by pity.

I remember the phone conversation we had the day before her first suicide attempt. It was a slushy Saturday in March. I was in my pajamas on the sofa, watching two sparrows fight over a lump of tallow that hung from the balcony rail. We were talking about something inconsequential, clothes and sizes I think, when she suddenly changed the subject.

“The Lord,” Rebecka said over the phone.

“Hallowed be His name,” I said reflexively.

“Is that a trick question?” I said.

She was quiet for a moment. Then: “I did something.”

“I went to the Katarina Church and spit in the baptismal font.”

“You did what?” I must have shouted; the birds took off.

“Spit in the baptismal font. I thought that might get His attention.”

“Rebecka, that’s insane. People have been fried on the spot for doing stuff like that.”

I waited for her to say she was just pulling my leg, but she said nothing, just breathed down the line. “He showed up? How?”

I looked outside. Melting icicles on the windows and rain gutters that glittered in sunlight unbearably bright after the foggy Stockholm winter. “Uh-huh,” I said.

“But He said He was okay about the font,” she continued. “He said that some people have to be allowed more mistakes than others. That they’re damaged and don’t understand.”

“Did you get a chance to ask Him about the other stuff?”

“No. He left after that. I’ll have to come up with something else.”

“I just don’t want to feel like shit. Is that too much to ask?”

“But there were psychologists then,” she said.

“And there aren’t anymore.”

“I already went through my damned test. I can’t deal with all this crap.” She hung up.

The string of attempts with pills, razor blades, and ropes started after that. She would call me after every attempt. I took her to the hospital the first few times. After making sure she didn’t have any life-threatening injuries (and she never did), they sent her home with a priest in tow. Eventually, Rebecka wouldn’t call me until a day or so after she’d done something. Then I’d visit to clean up the mess while she hid in her bed.

The Lord tells us we must have patience with our fellow men, especially those who are being tested. Rebecka was being tested. Around the time when I had just met her, she had been raped and tortured by her husband, rest his soul. She had never recovered.

“People who hurt others are the ones with the best imagination,” Rebecka said.

We were walking along the quay from Old Town to Slussen, watching the commuter boats trudge across Lake Mälaren. It was November. There were no tourists waiting for the boats this time of year, just some pensioners and a kindergarten group in bright snowsuits. I didn’t mind the cold, but Rebecka was bundled up. We each had a cup of coffee, Rebecka occasionally pulling down her scarf from her face to take a sip. I couldn’t help but look at her scarred lips as she did so.

“Would you get the idea to cut a pregnant woman open with a breadknife and take the baby out?” She was talking through her scarf again, voice muffled.

I shuddered. “Of course not.”

“Or poke someone’s eyes out with a paper clip?”

Of course. This was what she was on about. Karl.

“He used everything he could get his hands on.”

“I know, Becks. You’ve told me everything.”

She went on as if I hadn’t said anything. “You couldn’t imagine the things he came up with, not in your worst nightmares. Get it? And you know something else?”

“What?” I said, although I knew what she was going to say.

“How could He let it go on for three days before He decided to do something about it?”

“Yeah, after three days. Why did He wait so long?”

We were quiet for a while, sipping coffee.

“And I’m still here,” Rebecka said. “It’s like I’m being punished too.”

“I don’t think you are,” I said. “You’re not being punished. He doesn’t do that. Like I said before, maybe it’s a test.”

We went through the motions like that, until I said I had to go home and dropped her off at Slussen, where she would take the subway.

She didn’t take the subway. She tried to throw herself in front of it. It was in all the morning papers: Rebecka jumped from the end of the platform so that the train would hit her at full speed. The driver later told reporters that he’d had a sudden impulse to brake before he was supposed to. The train had stopped a meter from where Rebecka was lying on the tracks.

“Maybe now you’ll believe me when I tell you,” she said across the kitchen table the following day. “Listen, I’m ashamed for all the times you’ve had to come and clean me up.”

“No, it’s not. I know you think I’m a coward who’s afraid to really go ahead and kill myself. I know you wish I could make up my mind and either die or start living again.”

I couldn’t meet her eyes then.

“It’s always been for real,” she said. “It really has. I can’t sleep through a single night without waking up because Karl is there. He’s standing at the foot of the bed, and I know he’s about to do all those things to me. I want it to stop. I want to sleep.” She looked at me. “Every time I went for my arms with the razor they stopped bleeding. Every time I took pills and alcohol I started throwing up. I never once stuck my fingers down my throat. I promise. I just started throwing up. And if I didn’t, absolutely nothing would happen even though I should be passing out.”

“It’s getting worse. I don’t even get injured anymore. I swallowed a bottle of sleeping pills yesterday, you know?”

“They came out the other end this morning. Whole. The Lord is fucking with me.”

“I’m telling you. The Lord is fucking with me. I hate Him. He won’t take the nightmares away. Or the scars, all the scars. But He won’t let me kill myself either. It’s like He wants me to suffer.”

“Rebecka, we’ve been through this one before.”

“Would you stop taking His side all the time?” she shouted. “I’m your best friend!”

“That wasn’t what I was going to say.”

“If He thinks I’m supposed to deal with this myself, He could have just not come back in the first place. That way I would have known what to do. But now, this is the way things are. And I really don’t know what I’m supposed to do.”

The next time Rebecka called it was early morning.

I took the bike over to her apartment, expecting to see another scene of a failed suicide attempt. Her face was pale under the scarring when she opened the door.

She let me in. There wasn’t anything on her or in the apartment to indicate she had done anything to herself, just the usual mess. I sat down by the kitchen table while she poured tea. The blue tablecloth was crusted with cup rings. I traced them with a finger.

“I’ve realized what I have to do.” She put a steaming cup in front of me and sat down in the opposite chair. A smoky Lapsang smell wafted up from the cup. Rebecka rested her elbows on the table and leaned towards me.

“I’m serious about not coping anymore,” she said. Her tone was matter-of-fact. “I want to die, Sara.”

“Well, it’s not for you to decide anyway.” She took a sip from her cup. I didn’t know what to say, so I drank my tea. It was sweetened with too much honey.

“I suppose you’re going to tell me,” I said eventually.

“The Lord isn’t going to do anything,” Rebecka said. “I know that now.”

There were white dregs at the bottom of my cup.

I was naked when I woke up in her bed. My wrists and ankles were tied to the bedposts. Rebecka was sitting on a chair beside me, a toolbox at her feet. 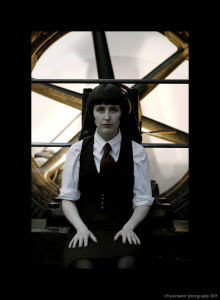 Karin Tidbeck works as a freelance writer, teacher and translator in Malmö, Sweden. She has published a short story collection and a novel in Swedish, and debuted in English in 2012 with the acclaimed collection Jagannath.  Her short fiction has appeared in Weird Tales, Tor.com, Lightspeed Magazine and Strange Horizons and numerous anthologies. Her work has received the Campbell Award and the SF & Fantasy Translation Award, as well as nominations for the Tiptree Award, the World Fantasy Award and the British Fantasy Award.