The Owner’s Guide to Home Repair, Page 238: What to Do About Water Odor

Turn the crystal knob on your kitchen faucet and shut off the water. Step back. Wave the air in front of you, cough, snort, pinch your nose, do whatever you must to clear the repulsive smell clogging your nostrils as if you’ve just inhaled rotten meat. Think of the dead crab you found when you were ten years old, its body washed to shore in Rhode Island, and you brought it home and kept it all summer long in an empty pickle jar on your dresser, even as the crab’s shell turned a sick, dark grey and erupted with crawling pink worms that scavenged the flesh, until one day in August when you opened the jar. Compare that hideous stench—choking, miserable, terrifying—to the odor here now, the same, coming from the water in your house.

Try the knob for the hot water. Repeat above.

Sniff your hands, flinch, scrub them dry on a dishtowel until they hurt. Wonder how long the stink will stick to your skin. Check the bathroom down the hall, and the one upstairs; open those faucets, now wring them closed, barricading yourself against the fumes rolling like invisible poison from the water. Run the bath, and discover the same.

Consider the toilet. Push the handle so that the bowl empties, the water shrinks away, the water replenishes. Cringe at the odor filling the bowl, the room, your lungs again as you stifle the urge to vomit, the toilet waiting patiently under you. Get out before this happens. Return to the kitchen, take the last clean glass from the cabinet, and fill it with a shot from the faucet. Hold the water to the light, and wonder how it can look so clear, so pure, when Holy Jesus Christ it smells so utterly rancid. Pour it out, discard the glass into the garbage pail.

Notice how the rankness persists even when the faucets are off, as though once released it has permission to reside here forever. Open windows. Spray cologne around the house like a rite of exorcism. Hold a cloth over your nose, hoping to filter out whatever impurity has invaded the air you breathe.

Speculate why this makes you afraid.

Dig around your workbench in the basement until you find the book Margaret bought you for Christmas the first year you were married, The Owner’s Guide to Home Repair. Refer to Page 238 in the “Plumbing” chapter, which contains three medium-sized paragraphs pertaining to water odor.

Call on your nearest neighbor, a retired old widower named Ellis who shares your public water supply, who is always happy to help when Margaret asks him as a favor to collect your mail while the two of you visit her parents in the Hamptons—an annual event which cannot be avoided, despite your dislike for her parents, despite your reluctance to allow Ellis as a witness to your private affairs, your substantial bills, your letters from the banks that require secret trips to the mailbox when you are home to intercept and hide them before Margaret can see.

Ask Ellis if he’s noticed any trouble with his water. Thank him when he checks and says no. Pretend to be interested in dinner some night, you, him and Margaret, then hang up on the lonely old man.

Remove the panels in your ceilings, room by room, and examine the pipes, spend hours hunting for old iron that may be a source of bacteria, the kind that stinks like death. Crinkle your nose at the smell in these crawl spaces, but find nothing that matches the descriptions and illustrations in your book, just smooth black PVC tubes slithering through walls and floors like huge headless snakes.

Decide you will not call a plumber to snoop around your house. Return the ineffective Owner’s Guide to Home Repair to its drawer in the basement.

Go without washing, so that your hands smudge, your fingernails darken with grime, your body turns sticky and unpleasant after a week without showering.

Conclude that something is dead, that somewhere in the belly of those PVC snakes winding through your house a small animal has fallen prey, crawled through a drain or a corroded hole to die and decompose. Imagine a rat like this, twisted and slick and gooey like some awful melting candy, souring the water as the current runs through the clogged pipe and discharges like pus into your sinks and tubs and toilets.

Take apart the panels in the ceiling again, begin a second sweep of the piping, this time examining every surface, every joint, every connection so closely that it takes hours to satisfy yourself there are no open cracks. Make trip after trip to the hardware store, buying new pipes of shiny copper and steel to replace any that warrant concern, any that appear weakened or crusty, any that you can possibly suspect as the source of decay. Replace them all but find nothing unusual, no dead rat, no carrion of any sort, once you’ve taken the old pipes apart and peered inside.

Try the faucets again. Surrender at last to the nausea that has haunted you for days. Pour your sickness into the sink as the reeking water urges you on.

Call the public water authority. Tell them about the smell. Tell them you cannot live like this. Realize that the man on the phone is indifferent to your distress, that there is nothing he will do to help you, not when two thousand homes in your district share the same water source, and you are the only one to complain.

Realize what this means.

Feel your heart strike, the painful spasm in your chest, your breath faster now.

Interrupt the man’s suggestions, the same useless ones you’d been offered by The Owner’s Guide to Home Repair, and ask for the exact source of your water—though of course you know the answer before he tells you, before the words bash your skull like a blow from the eighteen-inch cast iron wrench in your toolbox: Timber Lake Reservoir.

Think of Margaret. Think of her that evening last month when she discovered your lies, your business failures, how desperate you’d become. Think of the words she shouted, words like fraud and criminal and divorce and jail. Think of her later that night at Timber Lake, splayed on the shore like the crab you found in Rhode Island.

Hang up on the man repeating Sir? Sir? and recall the drive in the darkness to Timber Lake, Margaret finally silent on the floor in your backseat, her head soft and broken, the trees black like prison bars as you pulled off the road and picked a path through the elms down to the water, a stumbling, strenuous trek with Margaret in your arms and your cramped fingers hooked through the handle of your largest suitcase, until at last you collapsed at the shore and filled the suitcase first with rocks and then with Margaret. Remember how cold the water felt as you waded into the lake, towing the suitcase until you could go no farther without being pulled under, out where it was deep enough to push Margaret off inside her submersible coffin, sending her sinking and sliding down the slope of the lake floor to an untold resting place.

Imagine her now at the bottom of that reservoir, stuck in the black muck and vile reeds, the suitcase waterlogged and fallen apart, her corpse fat and half-devoured by fish, Margaret fizzing with decay—particles of death peeling away from her, set free into the water, into the supply, into the pipes, a funeral procession of stink and foulness, Margaret’s body coming home speck by speck in the currents.

Moan as the stench intensifies, burning your throat.

Lie in bed at night and listen to the pipes in your house moaning, too, the pressure mounting as the water pushes harder and harder through the catacombs of steel and copper winding hidden within your home, making each pipe tremble and rattle and bang from inside the walls, the ceiling, the floor, above you, below you, next to you. Cover your ears, try to ignore it, now cover your nose and shake your head to dispel that unforgivable odor, the fury of the pipes, the memory. Detect a whisper, coming from your bathroom, what could be a trickle of water or could be her voice: Darling.

Stagger from your bed, every footstep a bare white scream, force yourself to the bathroom. Flip on the light, look around you. Listen to the pipes tearing at the walls, the porcelain tiles wild with echo, the odor fiercer and fiercer, like a hand around your neck, dragging you to the shower stall.

Whimper, you pathetic thing. Throw open the curtain and step inside. Vomit, the odor so intense. Raise your dirtied face to the showerhead knocking and quaking above you, scream no no no, but you must. Accept it all, the memory, the monstrous pounding of the pipes, the stench of slaughterhouses, reach out a hand and turn the water on.

Let her rush over you, hot and angry. 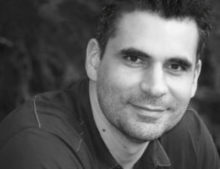 Vincent Michael Zito is the author of the novel The Return Man (available now from international publisher Hodder & Stoughton), a contributor to popular horror anthologies such as the recent Eulogies series, and an active member in the Horror Writers Association. He lives in Connecticut with his wife, daughter, and two magnificent dogs. He writes horror at night, while masquerading as Creative Director at a New England ad agency during safe daylight hours.